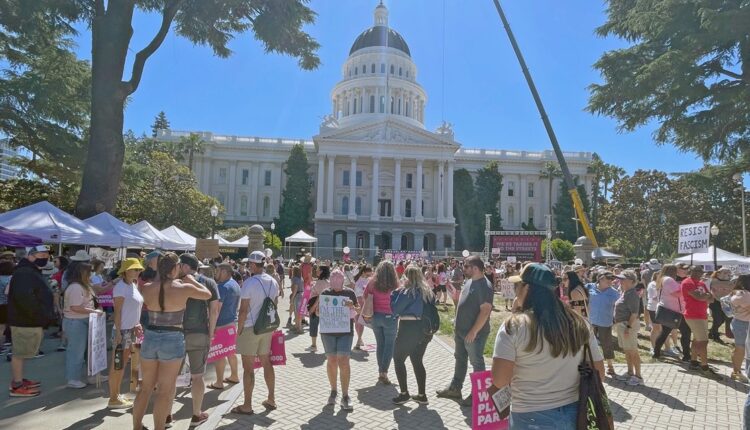 A leaked draft opinion from earlier this year suggests the conservative majority on the court would vote to overturn the landmark Roe v. Wade ruling.

SACRAMENTO, Calif. — Supporters of abortion rights took to the streets across America on Saturday to make clear their anger at the prospect that the Supreme Court will soon strike down the constitutional right to abortion. Cries of “My body, my choice” rang out as activists committed to fighting for what they called reproductive freedom.

Incensed after a leaked draft opinion suggested the conservative majority on the court would vote to overturn the landmark Roe v. Wade ruling, activists rallied to express their outrage and mobilize for the future as Republican-led states are poised to enact tighter restrictions.

From Pittsburgh to Pasadena, California, and Nashville, Tennessee, to Lubbock, Texas, tens of thousands participated in “Bans off our Bodies” events. Organizers expected that among the hundreds of events, the largest would take place in Chicago, New York, Los Angeles and other big cities.

In Sacramento hundreds gathered along the west steps of the Capitol before marching through the streets of Downtown Sacramento.

“To me, it means that abortion is legal and that it’s funded for everyone who needs it,” Susie Logan, a supporter of abortion rights, said. “I’m passionate about this because this issue is really integral to women’s safety, women’s financial security.”

“Women can make their own decisions and their own choices and why not let them do that,” Juliana Greenhalgh, another supporter of abortion rights, said.

Things were heated at times, too, as a counter group protested the rally at a nearby corner.

“We’re here to stand on the other side to say bans off the babies,” Viktor Choban, who is against abortion rights, said.” The 10 Commandments of God says ‘Thou shall not murder’ and that doesn’t change. “

However, polls show that most Americans want to preserve access to abortion — at least in the earlier stages of pregnancy — but the Supreme Court appeared to be poised to let the states have the final say. If that happens, roughly half of states, mostly in the South and Midwest, are expected to quickly ban abortion.

“In the United States, we should all be free to live by our own beliefs and we should have science guiding our public health policy and not religion,” Susie Logan, another supporter of abortion rights, said.

‘It’s definitely a dream job’: Riley Stockton, who sneaked onto Hoopfest courts at age 6, gears up for his first as executive director