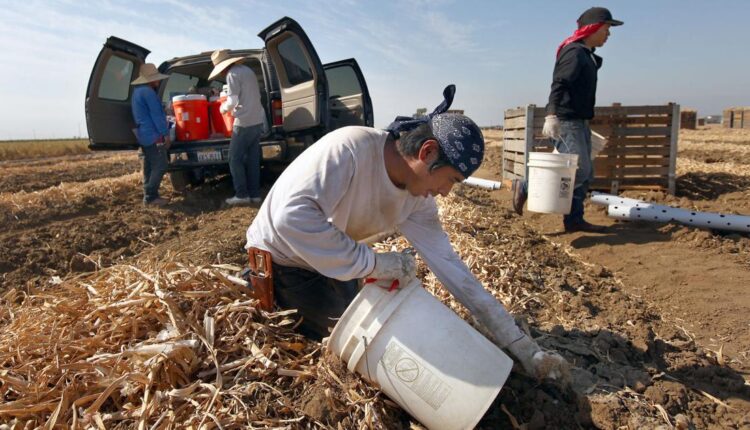 High heat and the health risks it presents Central Valley farm workers are becoming a greater focus for the state’s climate and environmental justice advocates.

At a 90-minute online presentation hosted Wednesday morning by Santa Rosa-based The Climate Center, a dozen speakers helped highlighted the need to protect outdoor workers from Bakersfield to Stockton amid expectations for more frequent days with temperatures topping 100 degrees.

More than one presenter referenced a 2015 study concluding farm workers carry risks of heat-related deaths up to 35 times greater than the average worker in the United States. There was also mention of a study released in August by the Union of Concerned Scientists that found more than 7.1 million US workers could lose 10 percent or more of their earnings in the years ahead because of extreme heat.

The dangers of working in high heat have long been a concern in Kern County, and in Sacramento, deaths of outdoor workers during high-heat events have led to the creation of workplace standards forcing employers to provide shade, cool drinking water and rests to workers in need, as well as training and vigilant supervision.

Wednesday’s event was a reminder, in one sense, of the health imperative to take steps protecting workers during extreme heat. But by the end, it amounted to a call to action to establish new safeguards on different levels.

The federal government announced last fall it was working on a national safety standard for working in high heat. In California, a bill introduced in February called Assembly Bill 2076 would establish a “chief heat officer” in the governor’s office and an Extreme Heat and Community Resilience Program for addressing heat risks and awarding grants for local and regional efforts in support of such efforts, with priority given to vulnerable or disadvantaged communities.

The Climate Center’s senior statewide organizer, Marc Victoria, said at Wednesday’s online event that the Central Valley is experiencing the worst impacts of rising temperatures, largely as a result of smoke from wildfires. He said the organization wants to prioritize climate justice so that everyone is secure in their future, not just the wealthy.

Another speaker Wednesday, J. Pablo Ortiz Partida representing the Union of Concern Scientists, said extreme heat is among the most dangerous aspects of climate change. He noted 2021 was the sixth-hottest year on record and that the intensity and frequency of extreme heat will only increase.

Partida called attention to warm nights as an overlooked concern. They can decrease sleep quality, which can increase fatigue and anxiety while lowering concentration levels. Some in the valley cannot afford air-conditioning, he said, and they don’t always want to open their windows at night because of episodes of poor air quality.

Community Development Director Irene Calimlim with the advocacy group Little Manila Rising in Stockton pointed to the problem of “heat islands,” defined as urban areas with few trees and disproportionately larger areas of pavement that absorb heat and radiate it back locally, leading to overall hotter temperatures.

Elderly people face some of the greatest risk because their worries about crime may cause them to close their windows at night, Calimlim said. She added that the use of air-conditioning during extreme temperatures can lead to power shutoffs, asthma and allergies can flare up during high heat, and water quality can deteriorate during algal blooms in warm periods.

Elizabeth Strater, director of strategic campaigns at the United Farm Workers Union, called heat stress “just one risk factor in a really grueling job,” in that early symptoms include a cognitive slowdown that can make workers more susceptible to errors such as falls and cuts .

Landscapers and construction workers can also suffer from heat stress, she noted, but what makes farm workers particularly vulnerable is the relative isolation in which they work, usually distant from medical treatment.

At even greater risk are farmworkers who get paid by the pound or the number of items they harvest, she said, because they have a financial incentive to push themselves hard despite hot conditions.

Strater reminded the meeting’s participants to consider the need for acclimatization: It generally takes two weeks of working in heat outdoors before a person’s body gets used to working in such conditions.

She pointed as well to a movement toward holding employers responsible for workers’ heat illness in cases where work crews are brought on by farm labor contractors.

“You can’t just subcontract your way out of your obligations,” Strater said.