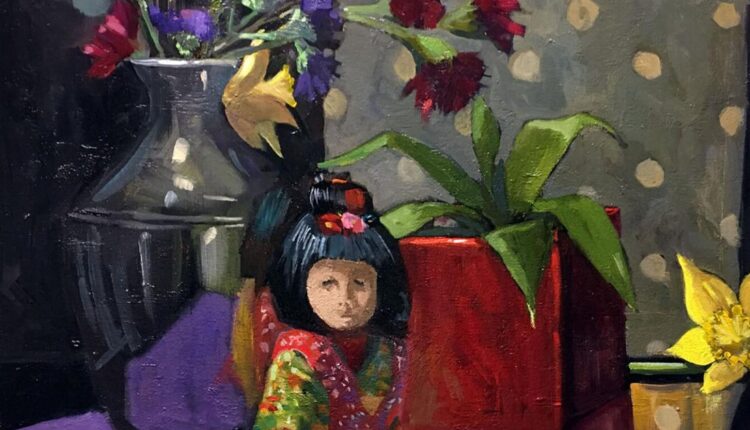 Abbott’s painting, which depicts a still-life composition of a small doll sitting up on a mirrored surface in front of a red cube-shaped planter, reflective vase with flowers, and gray-and-white polka dot background, received first place in the juried competition, beating out other artwork submitted to the Still Life category.

A press release from KVIE station announced, “Celebrating PBS KVIE’s decades of creating an accessible venue to bring art into the homes of Northern Californians, the 41st annual PBS KVIE art auction will showcase 276 works of art by emerging, well-known, and world – Renowned Northern California artists. PBS KVIE art curator Jill Estroff has announced that Arnold artist Linda R. Abbott has been recognized with an award after submitting her art to the annual curated competition.”

Abbott has entered the competition several times before, but this is her first time winning in the still life category. Abbott primarily paints landscapes “en plein-air” for which she has received awards at various competitions, including a People’s Choice Award at the Yosemite Renaissance 37 this year. Abbott says that she was surprised at receiving an award for this painting, however.

“You know there is a lot of really good art entered, and really good artists represented,” said the former art teacher who has an art degree from the University of California, Los Angeles.

Abbott has been a part-time resident of Arnold since 1980, where she enjoys watching the wildlife and lives the rest of the time in Merced. Many of her paintings depict scenes from the Yosemite Valley, where she has lived with her husband for 30 years.

Sacramento-based painter and juror Elizabeth Reagh’s comments about the painting called it “a painterly piece full of interesting textures, smart compositional choices and rich color.” Reagh stated, “The neutrals against saturated color and the use of complementary colors enlivens the overall effect of the painting.”

Abbott painted the unusual composition from a still-life that she arranged, including a mirror and a small kimono-wearing Japanese doll that belongs to her daughter.

“You sometimes assemble crazy things together because of the patterns,” said Abbott, who enjoys adding reflective items like mirrors to her composition “because it gives a little more interest.”

Curator Jill Estroff also praised Abbott’s painting, saying “it’s so well executed,” and that she “knew at once” when it was submitted that it would be a winner.

“It’s really a masterful piece and really well-done,” said Estroff, who is an artist himself and began curating the art auction last year after submitting her own art to the competition for the past six years.

Other categories in the auction include landscape, contemporary, figurative, sculpture, and photography. Artists from all over California participate in the auction, which is a benefit to raise funds for the station’s “local productions and community outreach services.”

The art auction takes place on-air and on-line, and artworks can be viewed in person at the studio from 9 am -5 pm Monday-Friday, until Sept 28. The auction will take place on Friday, Sept. 30 from 7 pm to 10 pm, Saturday, Oct. 1 from noon to 10 pm, and Sunday, Oct. 2 from 10 am to 8 pm For more information, visit kvie.org/artauction. Linda Abbott’s artwork can be viewed online at lindaabbottart.com.