‘Biffa Legend’: Touching tribute to Stockton Binman and ‘selfless’ father of one child after death aged 57 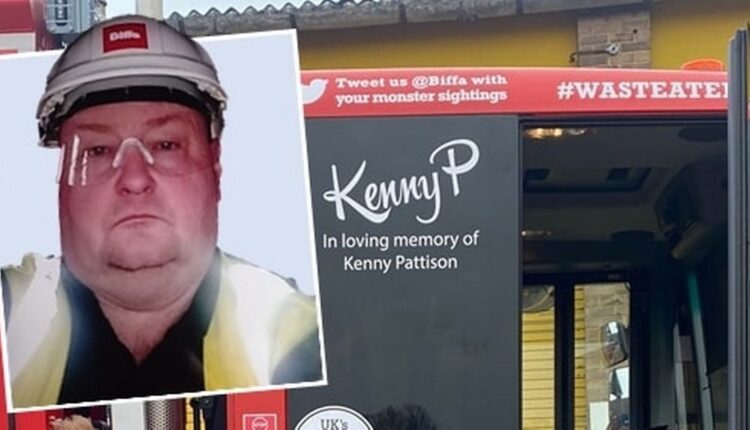 A much-loved Biffa garbage man who has dedicated his life to keeping Middlesbrough’s streets clean and tidy has been immortalized on one of the city’s eye-catching new garbage trucks.

Kenny Pattison sadly passed away at the age of 57 after a short illness.

Now his name is emblazoned on the side of a brand new Wasteater truck as a special tribute to his colleagues at the waste and recycling company.

Kenny’s family says he was delighted with the gesture.

Kenny was born and raised in Stockton, worked for Biffa for 36 years and was a season ticket holder with Middlesbrough FC.

“It’s lovely to see his name on the side of the truck,” Helen said.

“It is a very nice gesture and we are all very proud.

“He would have been thrilled down to the smallest detail.

“He really enjoyed his job and loved the people he worked with. He was there 36 years.

“We never heard him complain about anything.

“He was such a character, a comedian. You never really put him down and he was so generous he would give you his very last dime. He was a very selfless person.

“He used to donate to the Billingham Foodbank every month so we had a collection for them at the funeral and raised over £300.

“The main thing is how much he was an amazing father to Glenn.

“They loved each other and did everything together, every Boro game home and away. They just had so much planned.”

Kenny’s name on the side of the Wasteater truck
(Image: Biffa)

“I shed tears when I knew they would dedicate it to him.

“He would have been so proud of it.

“He’s made some really good friends at Biffa over the years. Everyone appreciated him when we spoke to them at the funeral and wake.

“Ken was a good person, a good man.

“He would help anyone if they were a bit stuck.

“He made me laugh every day with his jokes and banter.

“His son was the greatest thing in his life. He was so committed to him. He wanted to see him every weekend. He was a really good father.”

Paul Casey, Regional General Manager of Biffa’s Humberside said: “Kenny has been a well-loved member of the Biffa family for 36 years.

“He was fun, hardworking and would do anything to help anyone. He absolutely loved making a difference in the city where he was born and raised.

“He was an amazing man and he will always have a special place in our hearts. Naming one of our new Wasteater trucks after him seemed like a really fitting tribute. We are very happy that his family loves him too.”

Wasteaters use powerful mechanics to lift trash cans weighing up to 125 kg.

The trucks accept everything from plastic, paper, metal, glass and food, which are then taken to a Biffa site where they are recycled or turned into green energy.

To get the latest news from your region straight to your inbox every day, sign up for our free newsletter here