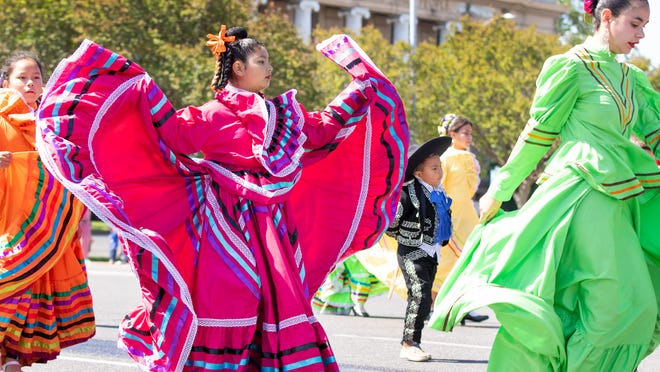 Mexican flags adorned the streets of downtown Stockton on Sunday morning as children and families waved their flags. Aztec dancing, Baile Folklorico, and live music were on hand at the celebration.

The annual Cinco de Mayo Festival hosted by El Concilio began the celebration with a parade that attracts families from all over San Joaquin County.

Tapia said her grandchildren, who are the third generation of their family born and raised in California, are taught the importance of their culture.

“We try to educate them and bring them out and show them as much as we can about their culture and to celebrate it and to enjoy what a great culture it is,” Tapia said. “I think we bring a lot to the United States and just our entire community. We’re hard-working, we’re good families who believe in education and believe in hard work.

Miguel Angel Aguiniga enjoyed the parade while wearing a large sombrero from Cabo San Lucas as he waved his large Mexican flag, an honor for him, he said.

Aguiniga, who is from Penjamillo, Michoacán, has lived in Stockton for more than 30 years, said attending the parade is not new to him.

He recalls his father who passed away also enjoyed attending the parade. It’s a tradition he and his family continue now that the parade is back after two years due to the COVID-19 pandemic.

“Celebramos la Batalla de Puebla y como somos Mexicanos tenemos que hacerlo, (We celebrate the Battle of Puebla and since we are Mexicans we have to do it),” Aguiniga said.

The event that has taken place for more than 25 years previously had an admission fee of $5 but not this year.

This year the fee was waived to help the vendors make more money since many have been affected by COVID-19 and haven’t had the same opportunities to make a living as they normally would, Mark Apostolon, vice president of strategic initiatives and equity advocacy for El Concilio, said.

“We felt it was right,” Apostolon said.

The event at Weber Point Events Center was filled with food, artisan crafts and goods, fun for the kids, live entertainment, health screenings and lowriders.

“I think what Cinco de Mayo represents for a lot of people is a good excuse to get out and begin the summer,” Apostolon said. “El Concilio is really proud to be a part of a tradition for Stockton, that celebrates ethnic heritage and also awakens us to all getting ready for the summer.”

This year, more than 11,000 to 21,000 people were expected to attend the free event. An event that took over six months in preparation and planning to put together.

Rigoberto and Guadalupe Murillo, owners of Adalynn’s Fiesta Latina, a leather goods store in Oakland, attended the event for the first time, showingcasing their handmade work and exported goods from Mexico.

They handcraft and personalize leather goods such wallets, knife cases and more.

“Hacemos cosas de piel, personalizadas … cualquier cosa que nos pidan las hacemos en piel (We make things out of leather, personalized … whatever you ask us to do, we make it out of leather),” Rigoberto Murillo said.