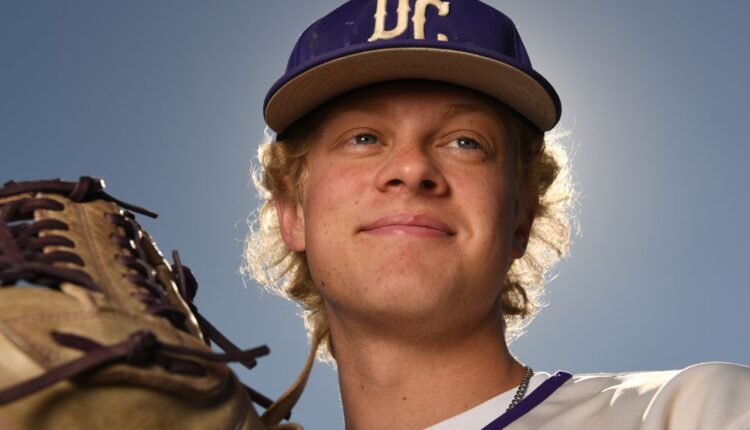 We’re about a quarter of the way through the 2022 baseball season, and the less said about the Colorado Rockies’ pitching woes, the better. Fortunately, there is hope for the future both in the short and long term. In the short term, Kyle Freeland’s strong start on Wednesday helped snap a 12-game losing streak to the San Francisco Giants and hopefully set the team on the right course following a rough skid. In the long term, there’s oodles of interesting pitching talent seeded across the levels of the Rockies farm system.

Now that enough time has passed for players to start establishing solid sample sizes of their work, I’d like to look at a few pitchers from each level of the Rockies farm system who have caught my attention. I’ll start today with the Low-A Fresno Grizzlies.

I’ve said it before and I’ll say it again: Tyler Ahearn out of Florida State University has the chance to be a real late round steal for the Rockies. The Rockies chose Ahearn with their final pick of the 2021 draft and he hit the ground running to start his professional career. In five outings with the Arizona Complex League Rockies in 2021, Ahearn pitched four innings with six strikeouts and no walks. He allowed just two hits and one earned run while also tallying two saves. The Rockies assigned Ahearn to Low-A Fresno to begin 2022, where he has continued to excel.

Ahearn sits atop the Grizzlies’ pitching staff with a team-best 1.56 ERA over 12 appearances and 17 1⁄3 innings. He has yet to allow more than one earned run in an outing with the Grizzlies, and has yet to give up a home run. He’s also frequently able to go longer than a single inning, having done so in six of his eleven appearances so far this year. Ahearn has struck out 19 batters while walking just seven, and opposing batters are hitting .206/.292/.286 against him. I wouldn’t be surprised if Ahearn earned himself a promotion to High-A Spokane in the foreseeable future.

Drafted by the Rockies back in 2018, this righty out of Whitworth University spent two seasons with the Boise Hawks with a 3.71 ERA through 41 appearances and 53 1⁄3 innings. With the cancellation of the 2020 minor league season due to COVID, Condreay didn’t pitch again until 2021 when he was assigned to the ACL Rockies. Condreay saw a decent amount of work in Arizona with 10 appearances and 9 1⁄3 innings, but struggled with hits and walks. He posted a 8.7 H/9 and a 6.8 BB/9, but did balance that out with a solid number of strikeouts and a 11.6 K/9.

Condreay is the elder-statesman of the Fresno Grizzlies at 25 years old (a good three or so years older on average than most of his teammates), so he might need to start working his way up the minor league ranks a little faster. He’s making his case for that with his best professional season so far. Condreay has made 13 appearances for the Grizzlies with 13 innings pitched and a fantastic 2.08 ERA. His BB/9 is way down to 3.5 while he tallies plenty of strikeouts. He has also earned four saves so far this season working late innings down at Chukchansi Park.

The Rockies spent a fourth round pick in 2020 on this Colorado kid from Castle Rock only to inexplicably trade him to the Cincinnati Reds before he played a single inning. Bill Schmidt clearly thought this was a bad idea because he acquired Williams back shortly after Jeff Bridich stepped down as GM. Williams had an ERA of 5.73 in 75 1⁄3 innings playing for the Low-A Daytona Tortugas in the Reds organization and the Fresno Grizzlies once he was re-acquired by the Rockies.

Williams is still developing as a pitcher, but has plenty of time to do it. The 20-year-old rotation pitcher is the second youngest arm on the Grizzlies’ staff. Williams had a tough start to the season that saw his ERA balloon to 10.13, but has been steadily improving since. His ERA has ticked all the way down to 4.02, with his ERA in the month of May sitting at just 1.96. Where Williams has been absolutely thriving is in the strikeout game. He’s struck out at least six batters in all but one of his six starts so far. The Schmidt administration clearly sees something special in Williams, and it will be fun to see how he develops.

The bullpen has been woeful in recent games | Rox Pile

There’s no doubt over the last few weeks that every aspect of the Rockies game has struggled, but Aaron Hurt over at Rox Pile shines a light on one specific part: the bullpen. Once again one of the worst units in baseball, ranking last in ERA, WHIP, and batting average, the Rockies bullpen didn’t exactly help the team during their miserable skid. One of the lone bright spots has been Tyler Kinley and his wicked slider. In 16 appearances and 14 1⁄3 innings, Kinley’s 0.63 ERA is by far the best of the pitching staff.

The Grizzlies dismantled the Quakes with a combination of strong pitching and strong offense. Case Williams earned his second win of the year with a six inning quality start, allowing just two earned runs on three hits. Williams did walk three batters, but also struck out a career high nine. Bryce McGowan struck out three batters in his inning of relief, but two walks and a base hit put an earned run on his record for the night. Felix Ramires—promoted from the DSL Rockies yesterday—made his first appearance for the Grizzlies during a scoreless eighth inning. He struck out one batter and walked two. Tyler Ahearn closed things out with a scoreless frame in the ninth, tallying a strikeout and a walk. Juan Brito and Juan Guerrero both homered during a five run fourth inning to fuel the Fresno offense. Guerrero was 1-for-4 with four RBIs while Brito was 2-for-4. Warming Bernabel and Yanquiel Fernandez both had strong nights at the plate, going 3-for-5 and 2-for-5 respectively.

Starting pitcher Tony Locey struck out five batters, but allowed five earned runs on five hits—including two home runs—in his 5 2⁄3 inning start against the Emeralds. Tanner Propst pitched 1 1⁄3 innings of relief, but gave up a three run home run in the top of the seventh that gave the Ems the lead. Robinson Hernandez pitched two scoreless frames to keep the Indians in the game while they chipped away at the deficit. The Indians scored nine runs on 11 hits, with Grant Lavigne, Daniel Montano, Colin Simpson, and Julio Carreras all going 2-for-4. However, it was the Emeralds’ five errors that helped Spokane to victory. Three of those errors—all coming in the bottom of the ninth inning—resulted in the Indians’ walk-off victory. Entering the inning trailing 8-6, back-to-back singles and a fielding error put runners in scoring position. A wild pitch scored the first run of the inning, while Drew Romo reached on a fielding error to score the second. Grant Lavigne walked to advance Romo to second, who then scored on a sacrifice bunt from Daniel Montano thanks to a throwing error from the Eugene catcher.

This was a great start for Karl Kauffmann, who pitched 6 2⁄3 innings of scoreless baseball. He held the Baysox to just one hit while striking out eight batters, lowering his ERA to 2.61 (just 0.92 in May). Riley Pint had a difficult night, allowing three earned runs on two hits and two walks over 2⁄3 of an inning. Dugan Darnell and Gavin Hollowell combined to shut out the Baysox over the final 1 1⁄3 innings of the game. Hollowell tallied his third save on the season. Aaron Schunk and Jack Blomgren were the stars of the show on offense. Blomgren—recently promoted from High-A Spokane—was 3-for-4 with a double and a home run. Schunk was 3-for-3 with a double and a home run of his own.

Isotopes starter Dillon Overton gave up five earned runs on seven hits and three walks without striking out a batter in four innings of work. Heath Holder and Reagan Todd both worked scoreless innings, with Todd even striking out three batters, but the damage was done. Julián Fernández continues to struggle this season with an ERA of 13.09, giving up a home run in the seventh inning. Logan Cozart gave up two runs on two walks and a base hit to seal the loss for the Isotopes. Offensively Albuquerque had six hits but failed to score in a shutout loss. Ryan Vilade was the only hitter to reach safely more than once. Kris Bryant made his second rehab start before he returns to the Rockies, going 1-for-4 with a double as the designated hitter.

Please keep in mind our Purple Row Community Guidelines when you’re commenting. Thanks!

The Private Sector Steps In to Protect Online Health Privacy, but Critics Say It Can’t Be Trusted