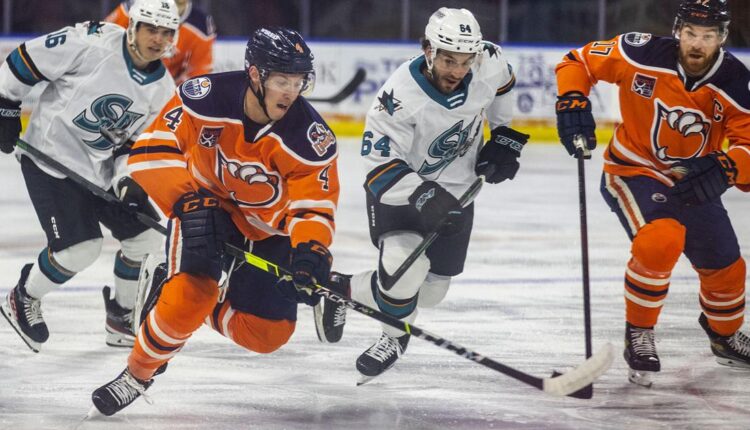 They played each other 10 times during the regular season and not much separated the Stockton Heat from the Bakersfield Condors.

The Condors scored 29 goals, the Heat 28. Four of the games were decided in either overtime or by a shootout with Stockton winding up with 13 points and Bakersfield 11.

The Condors won four of the last five meetings, including a pivotal regular-season ender that gave Bakersfield home ice advantage for the short Round 1 best-of-three series against Abbotsford, which the Condors swept.

So what can one expect when the no. 1 seeded Heat host the No. 4-seeded Condors on Tuesday night in the first of the best-of-five American Hockey League Pacific Division semifinals?

“More of the same,” said Condors coach Colin Chaulk. “The will and compete level that our guys displayed in Round 1 was exceptional. We realized how hard it was. That’s behind us and we’re looking to take on one of the top teams in the league.”

Bakersfield’s Luke Esposito added, “Playing just the same team over the course of a number of games in a row you build some rivalries for sure. Now we’ve played Stockton 10 times this year. We’ve built a bit of animosity with each other. I expect that to continue.”

No doubt it should be entertaining as this is the California version of the Battle of Alberta between parent clubs Edmonton and Calgary. Or as it is known here, the Highway 99 rivalry.

“There’s a reason they were at the top of the league throughout the entirety of the season,” Bakersfield’s Cooper Marody said. “They have a great coaching staff, great skill, a great goaltender.”

The two teams are very similar from the goaltender out.

Defensively, one of the Heat’s best, Connor Mackey, is up with the Calgary Flames, but Stockton remains strong on the backend.

Injuries hit the Condors D-corps hard as the season wound down, but despite missing many key cogs, the Condors went 12-4 in April. Desharnais led the entire league in plus/minus at plus 36.

“It shows that our team has a lot of character,” Desharnais said of winning despite numerous injuries. “A sort of next-man-up mentality. If someone goes down the next one is ready to go. If it has to be a forward going D like Tim Schaller, well, it’s going to be it and we’ll find a way to win.”

The Condors could be getting a couple of players back for this series in forward Brendan Perlini (missed the last 11 games) and defenseman Markus Niemelainen (missed the last nine games) as both skated with the regular group on Monday. Chaulk said it will be a game-time decision as to whether they play or not.

Bolstered by recent signings, and some players starting to get healthy, the Condors had 31 players on the ice Monday morning.

Chaulk said it is important that any one of the players not normally in the lineup be ready to jump in and successfully fill a role if called upon.

He pointed to forward Noah Philp, who was slotted into the lineup after Tyler Benson was injured in Game 1 against Abbotsford, of doing just that.

“If there was one individual who brought something that was not expected (in the opening series) it was Noah Philp,” Chaulk said. “He made a real nice goal to get us a timely goal there in Game 2.”

And while both teams know each other very well, Desharnais said none of the regular season stats means much now.

Progress being made on retail complex in southeast Fresno