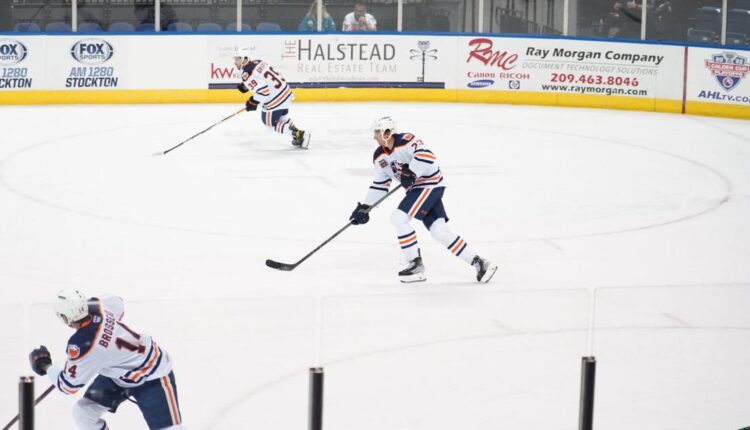 The effort was there for the Bakersfield Condors on Tuesday night. The attention to detail was lacking and that proved costly.

Game 2 of the best-of-five series takes place on Wednesday in Stockton at 6:30 pm Game 3 will be in Bakersfield on Friday night.

“It felt like at times we weren’t connected,” Condors coach Colin Chaulk said. “I think our effort was there, we tried to do the right things. At times we got a little bit away from our game plan but we’ll regroup and get back to work tomorrow.”

The Condors came out strong early in the first period and seemed to have the momentum when a power-play went badly. A sloppy line change led to a turnover and a breakaway by Jakob Pelletier who beat Stuart Skinner for a 1-0 heat lead at 12:32.

An up-ice rush by the Heat put the Condors down 2-0 just 83 seconds later as Emilio Pettersen drove down the right side, cut around defenseman Darrien Kielb and beat Skinner from the doorstep.

The Condors killed off a Heat power play to start the second before getting back-to-back power play opportunities of their own but could not score.

Bakersfield cut the heat lead in half 8:35 into the second when a wrister by Dino Kambeitz from the lefty circle found its way by Stockton goaltender Dustin Wolf.

Then came another costly Bakersfield turnover with just under five minutes left in the period.

Dylan Holloway tried to send the puck to Philip Broberg but it glanced off Bryon Froese behind the Bakersfield net. Pettersen raced in to collect the puck and sent it to a driving Walker Duerh who just got it past Skinner’s glove to make it 3-1.

Wolf, recently named the AHL’s outstanding goaltender showed that form in the third to keep the Condors at bay. He came way out of his crease to make a big save on Michael Kesselring with 11 minutes left. Then, with under three minutes he moved right to left across his crease to rob Dylan Holloway with a blocker save.

Defenseman Markus Niemelainen (who missed nine games) and forward Brendon Perlini (11 games) both returned to the lineup and Chaulk said both played well.

Perlini and Holloway each had a team-high five shots and Niemelainen had several big hits.

“I thought Nemo played hard, was physical, was simple,” Chaulk said. “Perlini had some chances, hit the post, missed the net a few times. I thought he was effective offensively. That’s what we need to see again from both of those guys.”