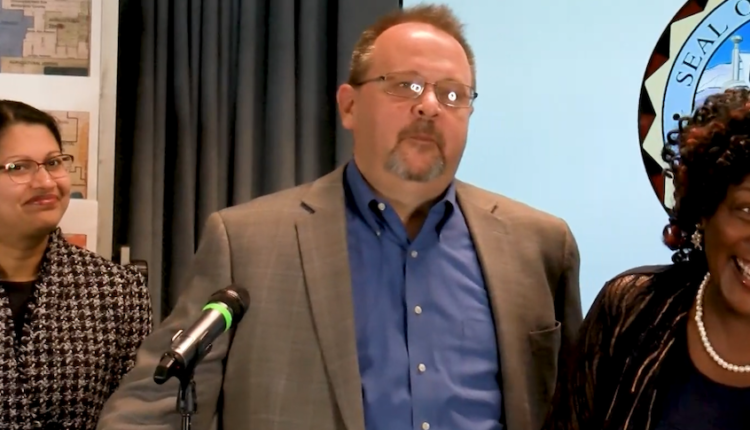 A settlement between the City of Fontana and industrial developers there is being held up as a model to balance the need for warehouse space and environmental equity.

California Attorney General Rob Bonta and the Sierra Club had filed a lawsuit against the City of Fontana after years of “unchecked warehouse development,” Bonta said in a news release.

Allegations had arisen that the town in San Bernardino County violated the California Environmental Quality Act in approving a 205,000 square-foot warehouse dubbed the Slover and Oleander project. Indiana-based Duke Realty was the developer on the project.

The agreement reached between the City, Duke Realty and the AG to mitigate potential environmental impacts represents “the most stringent standards in California for new warehouse projects,” according to Bonta.

The dispute between neighborhood groups and developers is not limited to the Inland Empire. As municipalities in the Central Valley grapple with the demands of competing constituencies, parallels arise between Fresno County and the City of Fontana.

“This ordinance should serve as a model for other local governments across the state to build upon,” Bonta said.

Located across from a school and in a low-income neighborhood, the development by Duke Realty was for a pair of speculative warehouse buildings in south Fontana.

The settlement now lays to rest the lawsuits from both the AG and Sierra Club. By the terms of the settlement, Fontana adopted ordinances standardizing requirements such as landscaping, net-zero energy requirements on buildings and yard equipment, solar panel-ready buildings and established truck routes, to name a few.

Additionally, Duke Realty agreed to create a $210,000 community benefit fund creating landscaping buffers at the adjacent high school and a five-year supply of air filters for the nearby community.

Fontana Mayor Acquanetta Warren said other mayors should look to the settlement as a model because all funds go to the community.

“You can and should refuse to participate in any settlements where the special interest groups receive any monetary payout,” Warren said in a press conference. “Ensure all benefits remain in your community,” she went on to say.

Warren, like Fresno Mayor Jerry Dyer, ran on a campaign of “One Fontana” that sought to bridge the divide between north and south. Going back to the 1980s, planners had chosen the corridor in the south of town for industrial use due to its proximity to highways and the Ontario Airport.

Over the past several years, industrial development has chased east as land in the Los Angeles basin was used up, said Fontana Deputy City Manager Phil Burum. Being only 60 miles from the ports of Long Beach and in close proximity to heavily trafficked highways and one of the biggest commercial airports in the nation — Ontario Airport — made Fontana an attractive hub for manufacturing and logistics.

Land zoned for industrial use can go for as much as $80 a square foot. About 11% of the workforce is in the industrial sector, Burum said.

But critics say industrial development has been concentrated in one area and has been a bane on environment health in the region.

Developers have brought in a total of 16 million square feet of industrial buildings in South Fontana, according to Bonta’s complaint.

“For years, Fontana residents have voiced their concerns regarding the rise of air pollution associated with the increase in warehouse development but have been disregarded,” said Liz Sena, founder of the South Fontana Concerned Citizens Coalition.

But at the same time, development has brought nearly $5 million to City coffers and provided good-paying jobs, Warren said.

So the two parties had to come together to reach an agreement.

“Duke Realty is proactive in its approach to development. We worked closely with the City of Fontana to ensure the economic and environmental impacts were considered,” a statement from Duke Realty reads. “Additionally, as Fontana city leaders developed the ordinance designed to create guidelines and policies to ensure thoughtful development practices while addressing environmental concerns, Duke Realty remained respectful and provided our expertise.”

“Every building built has to be solar ready and candidly that’s because at some point the state is going to require it,” Burum said.

The State of California requires 5% of parking spaces to be at least capable of handling electric-vehicle charging stations. Fontana requires that ratio of spaces to have chargers on them, with a requirement that another 5% be ready for chargers.

Yard equipment such as forklifts has to be electric or propane as well.

Trees would also be more mature, planted in 24-inch and 36-inch boxes as opposed to five-gallon buckets, allowing them to provide green space sooner.

Burum said the focus has been on trees because they are “one of the secrets to cleaning the air.”

Other ordinances revolved around truck traffic.

To reduce pollution caused by trucks driving around looking for loading docks, directions will be painted on the concrete. Refrigeration units would not be allowed to idle and would instead be plugged into the building. Truck routing plans would also have to be submitted for every end user “to get them from their parking lot through an approved truck route to a freeway as quickly and efficiently as possible,” Burum said.

The City of Fontana Police Department has its own Commercial Enforcement Unit to ensure trucks stay on those routes. They plan on expanding that division, according to Burum.

Complaints had arisen about spacing between development and “sensitive receptors,” such as the nearby high school. The previous guidance of 1,000 feet was based on a 2005 study commissioned by the California Air Resources Board using diesel trucks from that time.

That narrative has persisted, said Burum, despite the fact that since then, haulers have improved efficiency by 73%, according to a study of the City of Fontana commissioned by the Danish-environmental consulting firm Ramboll.

New CARB regulations are expected to reduce emissions by another 20%.

Burum said 60% of the items in the ordinance were already required as part of the conditions for approval. What the ordinance did was make it part of municipal code.

Developers were already implementing many of these measures. The remaining 30% to 40% did have a cost, but that cost is determined by the individual project.

“If there’s 30 individual impacts, each one of them has a cost,” Burum said.

But not every building would qualify for all required impacts. Painting the building or planting mature trees might increase costs by $1 million for a smaller development, Burum said. Larger warehouses might have to incur $5 million or $6 million if hit by all requirements.

“At the end of the day, they get it and it’s the way we had to go,” said Burum. “It’s the way that the environment is pushing things. It’s more responsible development. There’s a little pushback because there’s definitely an economic impact but they understand if they want to keep building they’re going to have to follow different rules.”

Athletics bring road win streak into matchup with the Angels

Three-year grad creates her own history; while also majoring in it