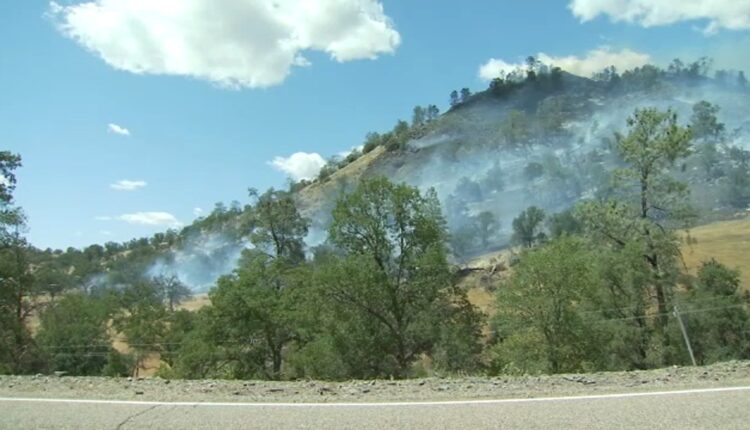 Fresno, Calif. (KFSN) — Crews moved in quick on the House Fire, which sparked near Tollhouse and Pittman Roads Wednesday afternoon.

Attacking the flames from the air and on the ground, firefighters were able to get a handle on the fire within hours.

They can hold 1,000 gallons of water – that’s three times the amount a regular fire helicopter can drop.

The House Fire grew to 170 acres and threatened several structures and power lines.

Two firefighters were injured after a boulder struck them — one, a US Forest Service firefighter, had to be airlifted to the hospital. The other, a firefighter from CAL FIRE, was taken by ground ambulance with a shoulder injury. Both are expected to be ok.

Fueling the fire, grass, trees and the steep terrain posed a challenge for firefighters.

But cool temperatures brought some relief by evening.

“The weather will be in our favor, so we’re hopeful firefighters can continue to battle, gain the upper hand through the night and then tomorrow, hopefully, we’re just eliminating hot spots,” Michaels said.

“It just takes one ember falling across that containment line and we’re off to the races again,” Michaels said.

An evacuation warning was issued for some residents by the Fresno County Sheriff’s Office.

If you want to find out if your home is affected, you can enter your address in this map provided by the sheriff’s office.