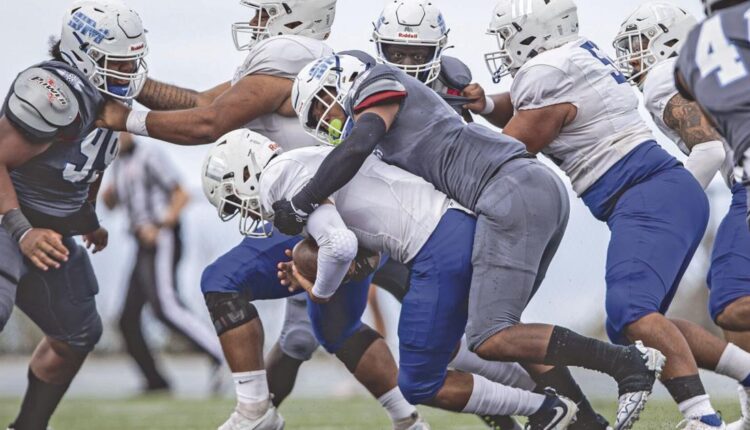 It was a Padres kind of day for the Bulldogs.

College of San Mateo (3-0) won its third straight to start the season, taking care of business with a 35-14 win over Modesto Junior College (1-2). In a week the no. 1 high school football team in Northern California, the Serra Padres, enjoyed a bye, a few of their alumni brought a Padre flair to the Bulldogs’ showing Saturday afternoon at College Heights Stadium.

Sophomore linebacker Taniela Latu (Serra) turned in a pivotal play early in the second half. With the Bulldogs clinging to a 14-7 lead, Latu snuffed out a Modesto fourth-down attempt in CSM territory, sacking quarterback Marcus Ordunez to force a turnover on downs.

“We held coverage,” Tulloch said. “Niela, I thought he did a great job in his pass rush plan. On the tackle, he turned the corner and made the play.”

Eight plays later, the Bulldogs scored on a 19-yard touchdown run by J’Wan Evans (East Rockingham-Virginia) to make it 21-7. CSM would go on to break it open with two fourth-quarter touchdowns.

The Bulldogs finished with four sacks on the day and benefitted from two Modesto turnovers. One was an interception by Latu. The other was a fumble caused by freshman defensive back Malakai Hoeft (Serra) and recovered by Jonathan Taylor on the final play of the third quarter — a failed fourth-and-1 attempt deep in CSM territory — to set up the Bulldogs’ first score of the fourth quarter.

“Modesto is a team that posed a lot of challenges as far as what they run on offense and they’re aggressive with attacking on defense,” Tulloch said. “I was proud of the guys because it was one of those games that ebbs and flows.”

CSM freshman quarterback Richie Watts (Rocklin) is not a Serra graduate. However, he replaced one in Luke Bottari, a two-year starter for the Bulldogs from 2019-21. And while Bottari was known as a hyper-efficient quarterback, he never enjoyed as efficient a day as Watts did Saturday.

Watts battled his way through four sacks to complete 18 of 20 passes for 291 yards and a touchdown.

“He was really efficient,” Tulloch said. “We took some sacks I wish we wouldn’t have, but from a throwing the ball perspective, when you’re 90 percent, there’s not really too much to complain about.”

Watts set up a quick score to start the day with a 53-yard completion to sophomore Raymello Murphy down to the Modesto 3. Then sophomore running back Ezra Moleni (14 carries for a team-high 72 yards) punched it in for a 3- yard score, putting the Bulldogs up 7-0 less than two minutes into the contest.

The CSM defense got a quick stop and Watts and Co. went right back on the offensive, with the freshman QB leading a nine-play, 75-yard scoring drive. His completions of 10, 6, 22 and 6 yards set up a 9-yard scoring run by Evans, his first of two TDs on the day.

But a Modesto touchdown with five minute to go in the first half — a 16-yard TD strike from Crus Marines Everett Hunter — cut CSM’s lead to 14-7. The Bulldogs went on to miss a field goal attempt at the end of the half, a 38-yard try by sophomore Gabe Plascencia. He’d go on to miss another attempt from 34 yards out near the end of the third quarter.

“We never do that,” Tulloch said.

With Modesto taking the second-half kickoff, CSM detailed a simple plan in the halftime locker room — get a stop, take the ball back and score.

Modesto running back Aiden Taylor (12 carries for a game-high 113 yards) put a quick wrinkle in the plan with gains of 2 and 18 yards to start the half. But after Modesto pushed across midfield to the Bulldogs’ 37, CSM produced back-to-back sacks, the first on third-and-2 by freshman lineman Pau Reed, and on fourth-and-10 by Latu.

After Evans’ second score made it 21-7 early in the third quarter, Watts added on in the fourth with a 16-yard scoring pass to Colin Giffin. Midway through the quarter, another Serra graduate, freshman slot receiver Nate Sanchez, put the game away for the Bulldogs by breaking a 50-yard scoring run for his first career touchdown.

“Nate just does it all for us,” Tulloch said. “He had an opportunity for one earlier on the same play where he cut and slipped. He came to the sidelines, and he said: ‘Coach, it’s there.’ Sure enough, we went back to that same play, he stuck his foot in the ground and creased it and made a great play.”

Modesto’s final score, a 37-yard TD pass from Marines to Jonathan Taylor, with 2:20 to play was too little, too late.

“I’ll tell you what, when you rush for 200-plus yards and pass for 200-plus yards, and your quarterback is 18 for 20, those are good things,” Tulloch said. “There was a lot of self-inflicted wounds… a lot of things we have to fix, but we were able to work through it against a championship-caliber team.”

Next week, the Bulldogs travel to Sacramento to take on American River College. Kick-off is scheduled for 1 p.m