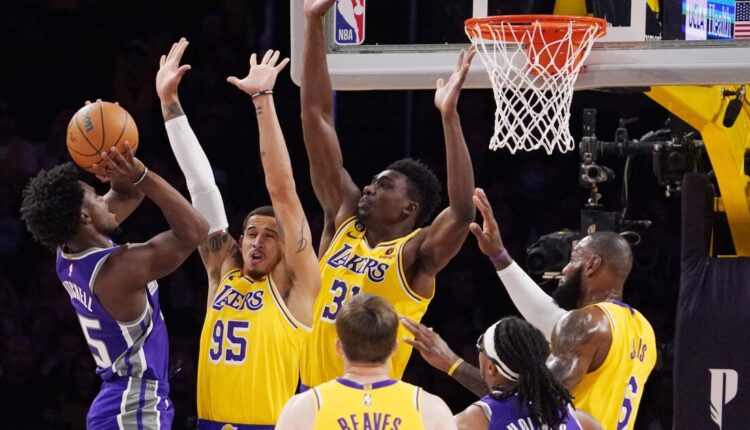 No butterflies. No pregame photos on the court. No extra moments of reflection on the drive to the arena.

“It’s game day,” Darvin Ham said before his first game as coach of the Lakers, projecting the calm, confidence and control that helped him land the job this offseason.

If Ham wasn’t in the mood for sentimentality, new Sacramento Kings coach Mike Brown cooked up some, offering a few stanzas when asked whether there was any poetry in the season starting with a matchup between the two men.

After all, it was Brown, when he was the Lakers’ coach, who hired Ham to work with the team as an assistant in 2011.

“Darvin Ham. I brought him in the league a while ago.

“I hope to kick his a— tonight.

“If I see him in the street, … I would never challenge him to a fight.”

The preseason is a good time for laughs, and Brown’s pregame poem provided some. Last year’s preseason for the Lakers, though, turned out to be more problem than poetry, the team looking bad in going 0-6.

This season started the same way, a 105-75 loss to Sacramento.

On Monday night at Crypto.com Arena against Sacramento, the Lakers took a more serious approach, Anthony Davis, LeBron James and Russell Westbrook all playing in the preseason opener instead of sitting out the exhibition. Davis even appeared on the team’s first injury report, though he was “probable” with lower back tightness.

“Just a little quick test run,” Ham said. “Sticking the toe in the water for the first time, so to speak, so it should be fun. I’m looking forward to seeing how they compete and how they carry what we’ve worked on for the last week or so.”

That first look began with Damian Jones and Kendrick Nunn joining James, Davis and Westbrook in the starting lineup. “They all fit,” Ham said, though he said the starters would be fluid. “Like, the way they’ve played with one another and the ball moves, we’re eager to see what that looks like tonight.”

For Nunn, it was the first on-court action since a bone bruise shut him down last year in the preseason. He promptly made his first shot — a corner three-pointer off an assist from Davis.

And though Austin Reaves, Patrick Beverley and Lonnie Walker all could fill that spot in the lineup, Ham said Nunn deserved Monday’s opportunity.

“Kendrick has been one of the many bright spots in camp. His offense, he’s shot the ball extremely well. I’ve challenged him defensively, and he’s made strides,” Ham said. “He’s earned it.”

Nunn finished with nine points in 20 minutes. He and Davis were two of the lone offensive bright spots in a game where the Lakers shot 31.2 percent from the field, quickly losing a halftime lead once the starters sat at the beginning of the third quarter.

Notes: Speaking of Walker, Ham said the Lakers’ biggest free-agency signing is set to be cleared from an ankle injury and should play when the team faces the Phoenix Suns on Wednesday night in Las Vegas. … Former Lakers Malik Monk and Kent Bazemore are with Sacramento. Monk was one of the Kings’ first guards off the bench. … Troy Brown Jr., Walker and Dennis Schroder all missed Monday’s game. The Lakers are still hopeful to have Schroder join the team this week pending issues regarding his work visa.