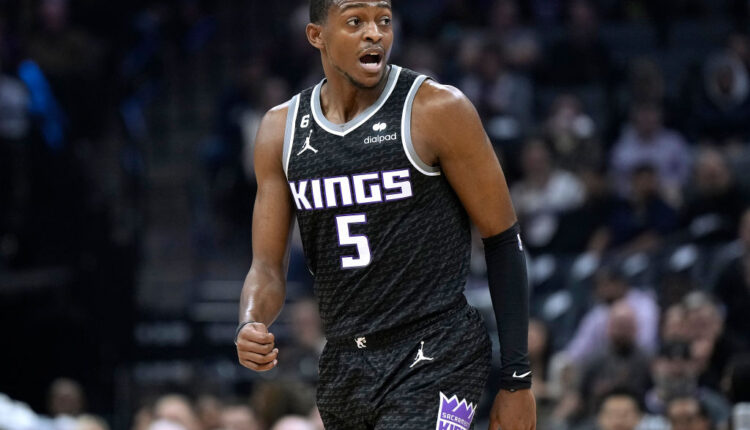 The Sacramento Kings won seven straight games before falling to the Atlanta Hawks 115-106 on Thanksgiving eve. The win streak was the Kings’ longest since the 2004-05 season, and they are poised to end their 16-year playoff drought. They are 10-6 and in third place in the Western Conference. They are the best team in California, record-wise anyway. How has the NBA’s perennial dumpster fire changed course?

Who Coaches The Sacramento Kings?

The Kings have the No. 2-ranked offense in the NBA underseasoned head coach Mike Brown and they are fifth in pace. So they play fast and get a number of possessions. They’re also shooting the ball extremely well. They lead the league in FG% and are eighth in 3P% and attempt the sixth-most threes per game in the league.

Reigning Western Conference Player of the Week De’Aaron Fox has made a jump as a player. He’s ranked sixth in the NBA in offensive EPM and sixth in overall EPM. He’s in the 98th percentile. In other words, he’s playing All-NBA level basketball.

“He’s making shots. You always look at the whole game, but when De’Aaron Fox makes shots and you have to go out there on the perimeter to guard him, he’s one of the fastest guys in the league,” said Golden State Warriors head coach Steve Kerr last week. “Then he gets downhill and he’s really tough to stop. I think traditionally, in his career, when he makes the 3-point shot, he’s a handful. If he’s not shooting that well, he’s easier to guard. Pack the paint. He’s shooting the ball well. So he’s a handful.”

Perennially among the NBA’s worst clubs, Sacramento is actually a good team. Fox is averaging 25.4 points per game and shooting the ball at an elite level. His 61 eFG% and 65 TS% are the best of his career and among the best in the league.

But it’s not just Fox.

Offseason acquisitions Kevin Huerter and Domantas Sabonis have proved to be excellent additions.

Huerter is shooting lights out on 67 eFG% and 68 TS% efficiency splits. He’s averaging a career high in points per game (16.7) and is hitting 50 percent of his threes on 7.4 attempts per game.

Sabonis is a bully inside and punishes any mismatch. He’s a luxury as the team’s second and sometimes third option. He’s averaging 11.1 rebounds per game this year, eighth in the NBA.

Veteran Harrison Barnes is a stabilizing presence in the starting unit who can defend and score.

Add in the young players like Davion Mitchell and Keegan Murray, and the team has depth and versatility in ways they haven’t before.

The Kings have been drafting in the lottery for over a decade, so it was only a matter of time before they secured talent. Now their talent fits together and they’re playing a style that is sustainable.

They’re still struggling defensively, ranked 28th in the league. If Brown can get them to be a middle-of-the-pack defensive team, watch out.

Even with their poor defense the Kings look like they’re going to make the playoffs. In a Western Conference where there is no dominant team the Kings could even finish within the top six, avoiding the play-in tournament.

We still have a lot more games to go but watch out if the Kings’ offensive efficiency remains near the top of the league as the calendar turns to 2023.