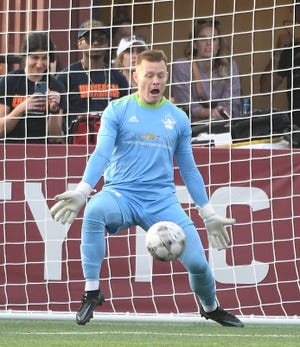 Hamtramck — Detroit City FC’s men’s side took an early hit to the jaw on Saturday night and never recovered, as a season-high crowd of 7,011 saw Le Rouge drop a league game at home for the first time this season with a 2-0 loss to Sacramento Republic FC.

Sacramento (6-4-3), which had scored just four road goals in six games this season entering Saturday night, scored in the 10th minute and again in the 56th to stun the Keyworth Stadium crowd and steal a victory.

DCFC (7-4-3) dropped to fourth in the Eastern Conference standings. Le Rouge will need to rebound in a hurry before his ESPN debut at home next Saturday against El Paso Locomotive.

“I’d be very surprised if we don’t get a reaction from tonight’s performance and the result. They’re disappointed they lost,” DCFC coach Trevor James said. “We’ll do the training this week and try to prepare the best we can for El Paso, just like we have everybody else, just as we did Sacramento, but hopefully we’ll get a positive reaction.”

DCFC was sloppy from the jump and never seemed to settle in. Its 57.1% possession rate was made insignificant by a whopping 23 passes being intercepted by the Sacramento defense.

“We’re at our best when we’re running and getting after it defensively, offensively, making sure they have no time and space with the ball,” DCFC defender Devon Amoo-Mensah said. “And today, it seemed like we were a step behind. We really didn’t get our foot after it.”

Damià Viader gave Sacramento a 1-0 lead in the 10th minute. He hammered a ball from far outside the box and into the lower right corner, beating DCFC keeper Nate SteinWasher for the early lead.

James said he felt his team came out flat and that it spiraled a bit as the match went on.

“I think we were off all over the place tonight. Our work rate was not good, technically, our passing was not good, we were turning the ball over,” James said. “It was an off night for us all the way around.”

DCFC has grown accustomed to overcoming these early gaffes and being able to punch back, coming away with a draw or win, and toward the end of the first half, it looked like Le Rouge might just follow through.

Veteran striker Antoine Hoppenot, who missed last week’s game in Pittsburgh because of the birth of his child, landed a strong strike on target that wound up providing DCFC with three consecutive corner kicks. All of them yielded decent chances, but none of them found the back of the net.

And just 11 minutes into the second half, Sacramento delivered a knockout punch. Keko got past the DCFC defense and chipped a ball past SteinWasher in the 56th minute to seal Le Rouge’s fate.

“Offense has been doing their job and I can’t fault them for what they’ve been doing in the past,” Amoo-Mensah said. “Today I think we have to take one on the chin of the defense and we didn’t do our jobs.”

Detroit City FC midfielder Rhys Williams came off the bench in the second half.

Williams was questionable heading into the match with a lower-body injury that James said was suffered in a light training session the day before last week’s game against Pittsburgh.

“He’s had a couple of good days playing where he’s been positive. It was more of a knee or quad-type injury. It wasn’t a serious injury, it was just maybe a bit of a strain, I think,” James said .

Injured midfielder Brad Dunwell, who suffered a fractured knee and minor meniscus tear late in a game against Atlanta on April 9, was listed as a bench player for Saturday’s game against Sacramento. James said he was “not really eligible to play. We wouldn’t have put him in tonight.”

Dunwell hoped to return in last week’s game against Pittsburgh, but it appears that has hit a bit of a snag. James said he’ll see a doctor this week.

“Hopefully we’ll get some news which will allow him to join in and do a bit more in training, and if he can do that, obviously that brings his availability into the fold,” James said.

Nolan Bianchi is a freelance writer.