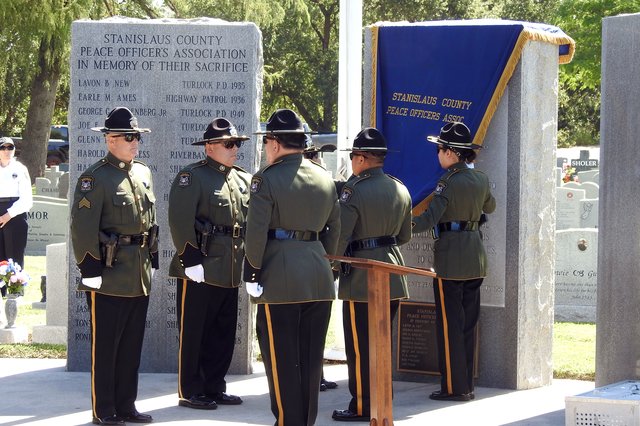 A large contingency of law enforcement officers from throughout Stanislaus County paused Wednesday to remember officers killed in the line of duty during 2021 as well as the county’s fallen officers since 1935.

The annual Peace Officers Memorial, held at Lakewood Memorial Park near Hughson, is a way for the Stanislaus County Peace Officers Association (SCPOA) to pay homage to fellow officers who have died while serving. Nine peace officers were killed in California in the line of duty during 2021. Nineteen officers died while serving in Stanislaus County since 1935.

Joe Johnson, the president of the SCPOA, noted that police work is “inherently dangerous.”

“To all of you who have chosen to and continue to choose to wear the badge,” Johnson told the officers gathered, “thank you for all that you do and are each and every day, for battling the demons, for being the right in a world of wrongs, for being someone’s warrior – you matter.”

Chief Christina Michel of the state Department of Motor Vehicles Investigation Division, a Stanislaus County resident, was the keynote speaker.

“For those of you who have lost a mother, father, brother, sister, child or spouse, we know it’s never easy,” said Michel, “but to lose a loved one in the line of duty due to a senseless act of violence or in any other tragic way is something that is inconceivable. You never get the answer as to why and you want nothing more than to have that question answered.”

She praised those who “selflessly volunteer to face evil head-on.”

“Most would run, most would hide and call for help. Not these heroes. They do it without hesitation.”

Ceres Police Chief Rick Collins read names of the county’s fallen officers since 1935 followed by the release of a white dove for each.

Turlock Police Department suffered both the first and greatest single loss of officers – five in total.

The first officer in Stanislaus County to die on the job was Lavon B. New who crashed his Turlock Police motorcycle and died four months later on Aug. 14, 1935. 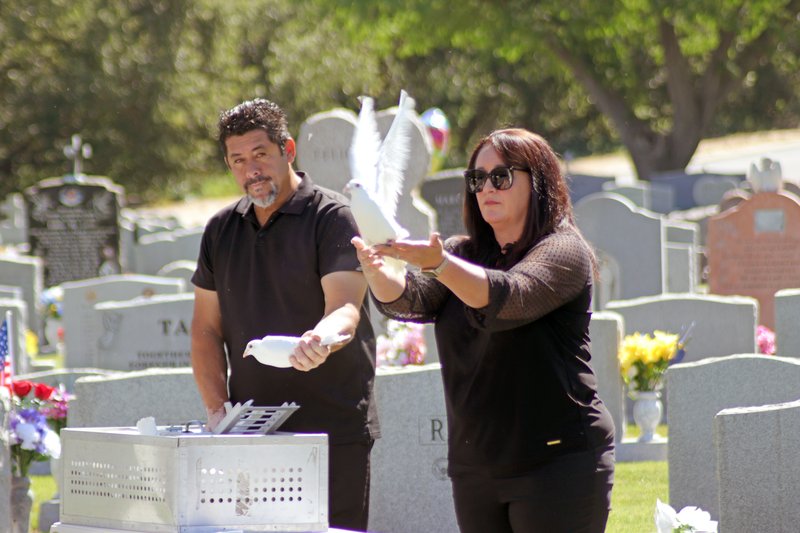 Doves were released after each name of a fallen officer was read.

Turlock Police officers Joe Kerley and Glenn Winans were scheduled to go off duty at midnight on Nov. 1, 1949 but decided to respond to a prowler call before clocking out. They joined with Officer George Bredenberg, who just came onto his shift. The three piled into a patrol car and traveled into thick fog which shrouded a railroad crossing where they entered the path of a passing train. Kerley and Winans were killed instantly and Bredenberg died two days later in the hospital.

Stanislaus County went without an officer death for 16 years until Oct. 17, 1965 when the patrol vehicle of Riverbank Police Officer Harold Harless was hit while he set up a roadblock on Patterson Road at Palmer Avenue. The driver was a 28-year-old suspect who had turned off his headlights when he collided with Harless’ car at 100 mph.

Stanislaus County Sheriff’s Deputy Harold Thornton was killed on Aug. 23, 1967 when he was ambushed by a suspect in a south Modesto as he answered a domestic violence call.

Sheriff’s Deputy Billy Joe Dickens was fatally shot in the back during a Jan. 27, 1970 bank robbery in Hughson. Dickens was shot after taking on two robbery suspects at the same time.

Officer Raymond Willert, 26, a five-year veteran of Turlock Police, was fatally shot to death while responding to a Feb. 9, 1973 Turlock bank robbery. His widow, Connie Willert Rossi was present at the memorial.

Ceres native Leo Volk died as a 24-year-old Modesto Police Officer in a May 21, 1973 police pursuit of a suspect. The crash occurred near the Snow White Drive-In on Yosemite Boulevard in Modesto.

While attending Ceres High School he was determined to go into law enforcement and had worked as a security guard at a local hospital. He made his dream come true after graduating from CHS in 1967.

Volk left a widow, Roberta, and a son.

The driver Volk was chasing was never apprehended.

For the next 32 years, no officer deaths occurred in Stanislaus County. But on Jan. 9, 2005, Ceres Police sustained its first officer death when Sgt. Howard Stevenson was ambushed and slain outside of the George’s Liquors.

A year later, on Feb. 17, 2006, the county was rocked by the death of CHP officer Earl Scott of Hughson. He was gunned down by Columbus Allen Jr. during a Highway 99 traffic stop just south of the Hammett Road exit near Salida.

Modesto Police officer Steve May died on July 23, 2009 at the conclusion of a seven-year coma from injuries sustained when a felon crashed into his car during a July 29, 2002 crash at South Santa Cruz and Mono Drive. May started his police career working in Ceres before transferring to Modesto Police in 1979.

Sheriff’s Deputy Dennis Wallace, 53, was murdered during a Nov. 13, 2016 traffic stop at Fox Grove, miles upstream from his final resting spot. The 20-year veteran of the Sheriff’s Department lived in Hughson and was assigned as a DARE officer at Dena Boer Elementary School campus in Salida. David Machado was recently sentenced for the crime.

Wallace’s widow, Mercedes Wallace, and family members could see his headstone just feet from the memorial. Below a color portrait of her late husband’s headstone picture is etched words he repeated often: “Kids don’t care what you know until they know that you care.”

Modesto Police Officer Larry Crom died Feb. 2, 2017 from complications of being hit on April 22, 1970 as he was riding his patrol scooter by a drunk driver in downtown Modesto. Crum sustained head injuries that required care for the rest of his life.

Stanislaus County Sheriff’s Deputy Jason A. Garner died in a solo car crash on May 13, 2017 on Crows Landing Road near South Seventh Street in south Modesto.

Tony Honstroza III, a Stanislaus County Sheriff’s Deputy, died in a Nov. 25, 2018 car crash at Claribel Road and Terminal Avenue near Riverbank as he was responding to an emergency.

The last officer loss in the county was Newman Police Officer Ronil Singh who was murdered in a car stop.

Family members of the local fallen officers who attended the ceremony included Stevenson’s widow, Kathy Stevenson. They took turns at the end of the ceremony placing flowers at the wreath placed at the granite memorial etched with their loved ones’ names.

The ceremony featured a Sheriff’s helicopter fly-over, a 21-gun salute performed by the California Highway Patrol Honor Guard, taps by Wayne Hill and the playing of the hymn, “Amazing Grace,” on the bagpipes by Randy Francis of Turlock. Patrol cars from the various police agencies rolled a vehicle by the memorial. A horse without a rider was led along by a Stanislaus County Sheriff’s deputy.

“I would pray for all of us that we leave with a renewed determination to demonstrate the same courage and character and compassion and service and selflessness in whatever it is that we do,” Richards prayed, “because as we do that our communities will be better.”

After the ceremony, Richards recalled the night that Sgt. Stevenson was killed and drove his wife Kathy to the hospital. He asked for God’s protection over peace officers.

President John F. Kennedy signed a proclamation in 1962 setting aside the first Wednesday in May as Peace Officers Memorial Day.

Sacramento man gets a surprise letter from an unexpected daughter