Fresno Co. correctional officers share frustrations with Board of Supervisors, plan to strike 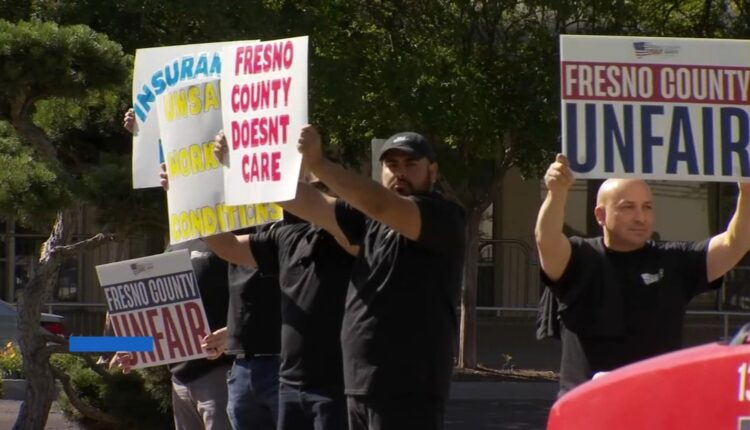 Fresno, Calif. (KFSN) — Fresno County correctional officers shared their frustrations over pay and staffing levels with the Board of Supervisors Tuesday.

Dozens filled the chambers ahead of a planned strike after the union turned down the county’s last, best and final offer.

The Fresno County Public Safety Association (FCPSA) held signs ahead of Tuesday’s Board meeting calling out what they say are unsafe and understaffed working conditions.

“It’s not that people aren’t applying and aren’t coming through the doors — it’s that they don’t stay,” said FCPSA member Alonzo Quezada.

The wife of a correctional officer, Alicia Zavala, also spoke to the board. She said she hoped they understood that there are families who are impacted as well.

The County offered an 11% base pay salary increase, new retention pay up to 7.5% after 10 years of service, plus a one-time $1,500 pandemic payment and $500 congregate setting payment per employee.

But Tony Silva, a labor representative with Goyette, Ruano & Thompson hired to help the FCPSA with negotiations, says since 2010 correctional officers have only received 7.5% in salary increases.

Silva says, in comparison to inflation and other comparable county positions, correctional officers are way behind.

“We didn’t mind that the county was going to give us the same salary increases as other units, we just asked for equity adjustments for the fact that we had fallen behind,” Silva said.

Silva says he hopes after Tuesday’s meeting, board members will recognize they missed the equity portion in their offer.

Chairman Brian Pacheco spoke briefly following all of the speakers saying he hoped they could reach a deal.

“The board is listening. We have heard you. We do appreciate everything you do and you are not forgotten behind the walls,” Pacheco said.

The FCPSA has announced plans to strike starting next Monday.

The union says those plans aren’t finalized just yet, but the county has already announced if a strike does happen it will seek an injunction to ensure that essential county services are not interrupted.