Fresno has launched a pilot program to keep street vendors safe. Vendors give it mixed reviews 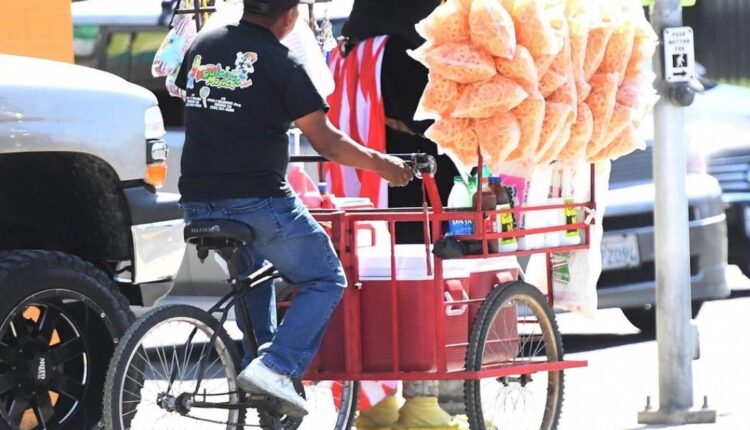 Miguel Ruiz is scraping ice to make a raspado, or snow cone, from the ice chest on his cart. It’s a Friday afternoon and students at Lane Elementary school in southeast Fresno are getting out of class. A young boy asks Ruiz for two snow cones.

“Which Flavor?” Ruiz asks in Spanish. Vanilla, the boy responds.

Nearly 30 years ago, Ruiz arrived in Fresno from Guadalajara, Jalisco in Mexico. He worked in the fields for 10 years before turning to street vending. When he first started selling, he says it was rough.

“The first years were difficult because there was so much violence, robberies and insults,” he says. “People would throw things at me as I peddled through the streets.”

He says the harassment lightened for him over the years but street vendors in Fresno have remained especially vulnerable. What he never expected, he says, was for another street vendor, Lorenzo Perez, to be murdered while working in the same neighborhood one yar ago. Ruiz says he never takes a day off, but after hearing the news, he took an entire week to process his coworker’s death.

Ruiz says both the business license and the camera make him feel safer.

“I feel like that’s helped too,” he says. “People don’t try to rob me because they see the camera, and it does work.”

Right now, 20 street vendors are trying out the new cameras. Councilmember Arias says the goal is to equip all 200 vendors in the city of Fresno with the devices.

“These are by far the most vulnerable retail vendors that we have in the city, and they’re simply trying to survive and provide for their families,” he says. “So that’s why it’s critical that we protect their safety and ensure that they can engage in the economy.”

Council member Chavez says he will propose $300,000 dollars for the initiative from the small business assistance program for the upcoming fiscal year.

Genoveva Islas is the director of Cultiva La Salud, which works with low-income, Spanish-speaking communities. She says aside from deterring possible attacks, the cameras are also helpful if someone does assault a street vendor.

“Then there is some footage that can help document who committed that crime against the vendor and bring them to justice,” she says.

Just two blocks north of Lane Elementary, Armando Franco’s cart sits in a neighborhood outside a home. He’s slicing a corn and placing the kernels into a cup with mayonnaise, cheese and some peppered chile. In the 13 years he’s worked as a street vendor, he says he’s been attacked and robbed more times than he can remember.

But since the camera was installed on his cart, he’s had fewer problems.

“I heard this group of teenagers talking amongst themselves in English,” he recalls. “They were planning to punch me and then run with the food, but then I heard them say they saw the camera.”

In the end, they didn’t rob him. But despite this incident, Franco says he doesn’t think the camera is all that useful since he doesn’t have a phone with internet.

“The city council members told me the camera was recording, but it doesn’t work for me because I don’t have internet on my phone,” he says.

Councilmember Arias says they’re working on solutions that will eliminate the need for a phone to connect to the internet.

Franco says he’d feel safer if the camera came with an alarm that could alert the police of an assault or robbery. In the meantime, Franco says he now carries pepper spray and a taser to defend himself.

Stockton Veteran heading back to Ukraine with supplies

What to know around masks, testing, vaccinations as cases rise again in Sacramento