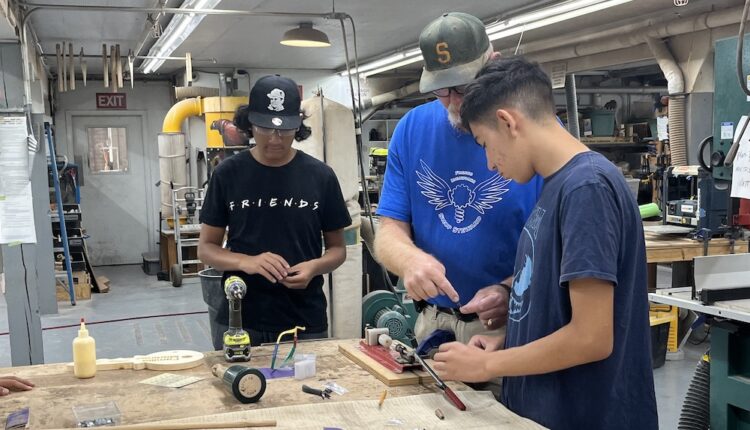 Makers and students can explore the various parts of Fresno Ideaworks, including the woodshop seen here, to see if they would like to become a member. Photo by Ben Hensley.

Ten years ago, Fresno welcomed its first makerspace, offering one centralized place for residents to explore their creativity. From hands-on projects in the woodshop to classes on everything from pottery to coding, Fresno Ideaworks offers Valley residents the opportunity to explore and grow their creative side.

Fresno Ideaworks was founded in 2012, originally with the hope of finding a space dedicated to coding.

“A couple of guys named Scott Kramer and James Thornburgh met online and decided to actually sit down and talk about the need for a hackerspace in Fresno,” said former board member and textile shop lead Janelle Smith Ozeran. “It grew very quickly after they got their 501(c)(3) status into a full-blown maker’s space.”

Ideaworks had its first mini-makers’ fair at Chukchansi Park in 2013, and took part in Art Hop events and other showcases throughout the city. They also collaborated with the Fresno Public Library for events, as well as parks and museums.

“We started doing woodshop and pretty quickly after that we had a member who built skateboards and does bike repair — he moved in,” Ozeran said. “They started opening up at Art Hops which brought in a glass blower…those sort of more eye-catching things. The glass blowing — the big, noisy tools — started bringing people in.”

The metal shop at Fresno Ideaworks is a popular place to learn metal skills including welding. The organization has about 100 members. Photo by Ben Hensley

Originally located on Broadway Street in the Mural District, Ideaworks moved to its current location at 1730 H St. in 2018.

The new home offers the organization more space, including an upstairs that will one day house more workspace.

“What we really want to be doing is figuring out those demographics that actually want to come into the shop,” Ozeran said. “A lot of the outreach we have done is with kids.”

Ideaworks has sponsored high school robotics programs and hosted spaces for elective programs like woodshop, sewing, 3D printing and robotics. They are working with Fresno Unified on a woodshop summer camp for high school students.

Memberships are easy to apply for, with first-time members receiving a reduced fee after completing a class with Ideaworks.

Ideaworks usually has around 100 active members, and are hoping to grow those numbers following the pandemic.

“We probably have about 30 members, of that 100, who are in here more than once a week working on their own projects,” Ozeran said. “Those people are also the ones who are most likely to volunteer to take on another role in the organization.”

The organization also participates in community projects, completing projects for Museum of the Sierras, and have built for and worked with Chukchansi Park, building miniature golf sets for the park, as well as benches and marquees for Grizzly Fest.

Ideaworks is currently working on a park bench for the West Fresno CAN (California Avenue Neighborhood) project.

They are also putting together a quilt made from the scraps of facemasks used throughout the last several years of the COVID-19 pandemic.

“You can see different personalities in it and it’s very fun,” Ozeran said.

Fresno Ideaworks members are given access to workshop areas and tools (after completion of safety classes), shop access card, discounts on classes and more. New memberships start at $50 per month or $550 for an annual membership, which offers one month free membership.

“Anybody can volunteer just by shooting us an email or calling,” Ozeran said.

KHN’s ‘What the Health?’: Drug Price Bill Is a Go in the Senate

Here’s how many people use Sacramento County cooling centers, how much they cost