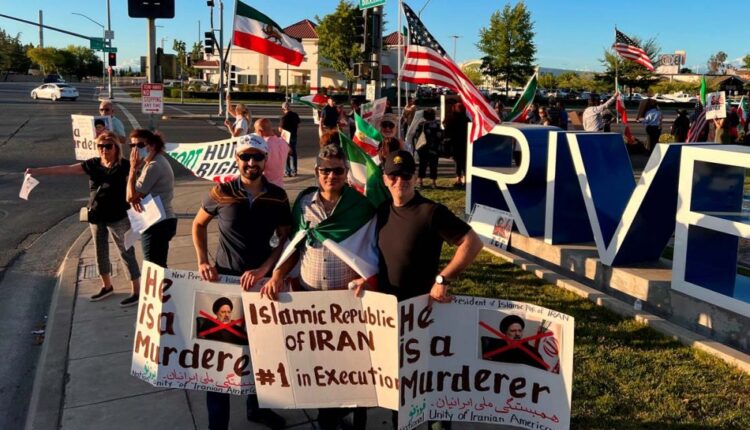 The collapse last month of a 10-story building in Iran that killed at least 41 people is sparking protests across the globe, including Fresno.

The protesters’ anger is fueled not only by the human loss but also by alleged corruption between the building’s contractor and Iranian officials.

On Sunday, several dozen Iranian-Americans turned out at the intersection of Nees and Blackstone avenues to protest the building’s collapse and Ali Khamenei’s inhumane regime.

The protesters also called for the Biden administration to stop negotiating with Iran’s leadership on a nuclear deal.

“Many Iranian-Americans gathered wanted to voice their opposition to the Biden Administration’s continued negotiations with the Iranian regime that completely ignores its atrocious human rights abuses and complete disregard for democracy, rule of law, and international norms,” said Mehdi Ghajar of the Iranian -American Alliance of Fresno.

“Most Iranian-Americans now believe that the clerical regime is beyond any reform given its absolutists-fascist style structure and policies. They want their US representatives to support the Iranian people’s desire for peaceful overthrow of the hardline Islamist regime.”

Ruins of the 10-story Metropol Building that was under construction in Abadan, Iran. The death toll is 41 but the search for human remains continues. (Iranian Senior Vice President Office via AP)

Protesters In Iran Clash With Police

Following the building’s collapse in Abadan, a city of about 350,000 in the southwestern province of Khuzestan, 13 local people — including the city’s mayor — were arrested on suspicion of negligence and corruption, according to the BBC.

However, protesters in Iran believe that government corruption causing the collapse is more widespread. At some demonstrations, “Death to Khamenei!” has been shouted.

Reuters reported that police have used force against demonstrators and unverified video shows violent outbreaks between protesters and police. And, according to Radio Free Europe, authorities have restricted internet access in the Abadan area to prevent locals from sharing videos or communicating with one another.

Khamenei addressed the events in Abadan during a live televised speech on Saturday.

“Those responsible must be brought to justice, their punishment should serve as a lesson for others, and similar incidents in future should be avoided,” he said.

Khamenei also blamed the outbreak of protests in the oil-rich Khuzestan province on Iran’s “enemies,” including “treacherous Iranians” abroad, who he said try to harm the country’s interest through “psychological warfare and online campaigns.”

Reza Pahlavi, in exile in the US and the eldest son of Iran’s deposed monarch before the 1979 Islamic Revolution, seized on reports of growing anger in Abadan to call for the creation of a “unified front against the Islamic Republic.”

(Associated Press contributed to this report.)

Garlic Festival in August at the San Joaquin County Fairgrounds

Kansas woman who became ISIS leader to be sentenced