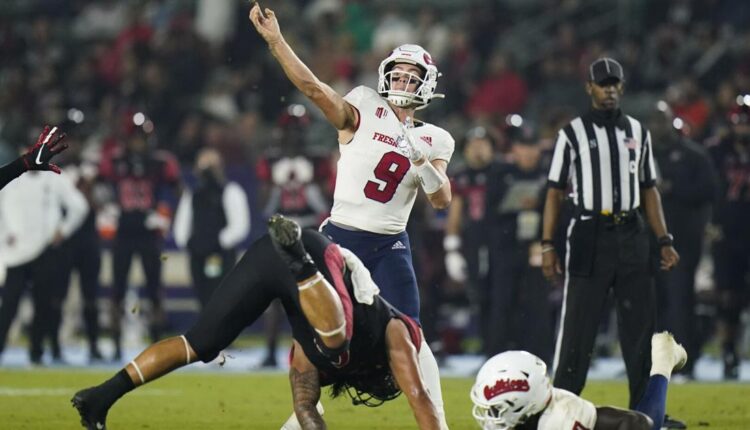 LARAMIE – With an abundance of roster changes and four programs with new coaches at the helm, the 2022 Mountain West football season is shaping up to be filled with intrigue.

Here’s a look at where each team stands heading into fall camp.

When head coach Kalen DeBoer left for Washington on Nov. 30 and quarterback Jake Haener hit the transfer portal the next day, the Bulldogs’ seemed set for an inevitable setback. Those fortunes changed a little over a week later, however, when Haener withdrew from the portal. Haener was one of the most productive group of five quarterbacks in the country a year ago, ranking ninth and 11th in the FBS, respectively, in passing yards and touchdowns. Jeff Tedford – who led the Bulldogs to a 26-14 record from 2017-19, with a MW title in 2018 – is back as head coach, with a dynamic cast of skill players returning.

The reigning conference champions should be in the mix once again this fall, but they have some significant holes to fill – especially in the passing game. The Aggies lost their top three receivers from last year, who combined to catch 206 passes for 3,337 yards and 31 touchdowns. Maryland transfer Brian Cobbs should help fill the void at wideout, though, with starting quarterback Logan Bonner and leading rusher Calvin Tyler Jr. set to return. The fact that all of their West Division games come against teams that finished in the bottom three of the division in 2021 will likely boost their title hopes, as well.

It’s difficult to frame Boise State’s 2021 season as anything other than a letdown. After being picked to win the Mountain Division, the Broncos proceeded to finish third, while posting their lowest winning percentage since 1998 – the program’s third year at the Division IA (now FBS) level. That said, there is reason for optimism heading into the fall. Boise State brings back 11 “super seniors” and an array of other contributors across the board, including starting quarterback Hank Bachmeier. The Broncos are also the league’s highest-ranked team in ESPN’s Football Power Index at No. 47, 22 spots ahead of the next MW school.

Despite pedestrian quarterback play, the Aztecs went 12-2 with a West Division title last fall. They got hammered by Utah State 46-13 in the MW championship game, though, failing to find the end zone until they were trailing 39-6 late in the fourth quarter. Reigning MW coach of the year Brady Hoke is expected to have his team in contention again this season, with a defense that ranked eighth nationally in yards allowed per play set to be dominant once again. If SDSU can get quality production behind center, it will be among the best Group of Five teams in the country. That’s a big if, however.

With the exception of back-to-back 5-7 seasons in 2017 and 2018, and the shortened 2020 campaign, Air Force has been a regular MW contender in recent years, winning 10 or more games four times since 2014. The Falcons hit the double-digit mark again last fall, and although they lost the Mountain Division tiebreaker to Utah State, they made a case as the best team in the division down the stretch. They ended 2021 on a four-game winning streak, and although their triple-option attack can skew some statistics, they should feel good about quarterback Haaziq Daniels and fullback Brad Roberts coming back to lead the nation’s top rushing offense.

The 2020 MW champions were prevented last fall by injuries and one of the least productive offenses in the country, with the Spartans ending the year on a three-game losing streak to finish 5-7 and miss out on a bowl invitation. They did make some solid additions, however, that make them one of the more intriguing teams out West. Among these are three incoming MW transfers in Hawaii starting quarterback Chevan Cordeiro and Nevada receivers Elijah Cooks and Justin Lockhart.

The disappointment of going 2-6 in conference play after a 4-0 start was momentarily replaced by the excitement of a Potato Bowl rout of Kent State, but the transfer portal was waiting in the wings with a wet blanket.

Wyoming lost 12 outgoing transfers that started at some point in 2021, with Butkus Award finalist Chad Muma and four other Cowboys moving on to NFL opportunities. For all the upheaval caused by the transfer portal, though, the Pokes also used it to their benefit. Cornerbacks Jakorey Hawkins and Deron Harrell bring Power Five experience, having played a significant amount of snaps at Ole Miss and Wisconsin, respectively, before coming to Laramie. Utah State transfer Andrew Peasley had a solid spring game performance and is the presumed starter at quarterback heading into the fall, while returning junior Titus Swen is among the early favorites to earn an All-MW nod at running back.

The Rams’ future is light years brighter than it was this time last year, with Nevada’s Jay Norvell taking over after a forgettable two years with Steve Addazio at the helm. Norvell brought 11 of his former players with him, including quarterback Clay Millen and a handful of others that are in line to compete for a starting spot.

They also bring back some veterans on the defensive side of the ball, although since CSU ranked 10th in scoring and total defense and last in rushing defense during MW play, it’s uncertain how much of a positive this actually is.

All signs point to Norvell turning around the program, as he did with the Wolf Pack. This fall, however, is probably too soon for the Rams to find themselves in contention.

After a 33-26 run with Norvell at the helm, the Wolf Pack went back to the Pac-12 assistant well in hiring Ken Wilson from Oregon. Wilson was part of some of the most successful stretches in Nevada’s history, working as a longtime assistant under hall of fame coach Chris Ault and several others over a 19-year span. He’ll have his work cut out for him in year one, though, given the mass exodus of transfers following Norvell’s exit.

The Rebels were one of just 13 FBS teams to finish with two or fewer wins in 2021, but they did find reasons for optimism down the stretch.

UNLV dropped its first eight games, although five of these losses came by an average of 5.6 points. The Rebels then picked up back-to-back 14-point wins over New Mexico and Hawaii and played West Division champion SDSU to within eight points, before getting blown out by Air Force in the season finale.

Todd Graham was ousted as head coach in January amid allegations of player mistreatment, but not before a rash of student-athletes – including his own son – hit the transfer portal. Cordeiro, who started 23 games at quarterback for the Rainbow Warriors, is among the most notable exits.

For all the negativity of Hawaii’s offseason, though, there were a few bright spots. Legendary UH signal-caller Timmy Chang returns home to lead the program after five years as an assistant at Nevada, and should help elevate the play of a quarterback room that is filled with uncertainty.

The Lobos picked up an upset win over Wyoming in Laramie midway through conference play, but it was all downhill after that. They lost their final four games by an average of 25.75 points, with the only opponent they kept within two touchdowns being UNLV, which was winless at the time.

New Mexico had the lowest-scoring offense in the country in 2021, and lost its top player on that side of the ball when running back Aaron Dumas transferred to Washington. The defense does provide some hope, however, after ranking fourth in yards allowed per game during MW play.