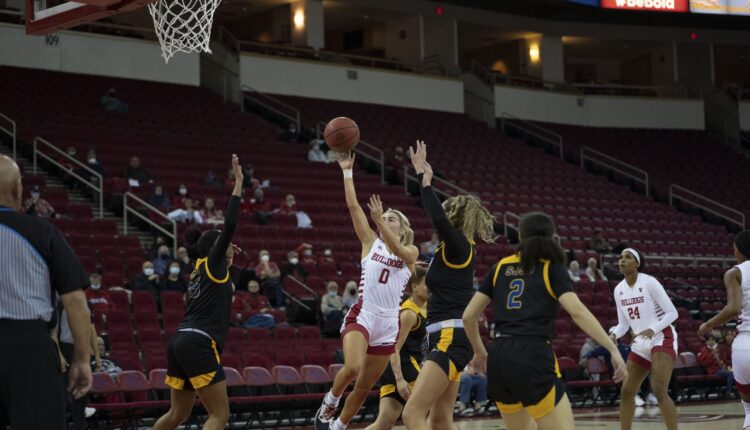 After posting a career high in points with a 78-57 win Thursday night, she returned as the second-best scorer in Saturday’s win with an 87-74 win at the Save Mart Center. In their second matchup with the Bulldogs, the Spartans still struggled offensively.

Motta’s shots to the ground helped the Bulldogs win as the game’s second-best scorer with 19 points. Motta shot 9-13 on floor and 1-1 on free throws.

In the last minute of the second quarter, Motta scored her 13th point of the game after hitting an offensive rebound and scoring the second chance layup, which got the crowd excited just before halftime when she was also fouled for one and one . As she celebrated and took the free throw, Motta said she didn’t notice the fans’ excitement because she was involved in the game.

“I worked hard with my coaches, they make everything easy for me, so nothing different than in the last game,” said Motta.

This is Motta’s final year with the team. She said since it is her last year she has nothing to lose and is trying everything to make it a worthwhile experience.

Fresno State forward Wytalla Motta shoots a layup during the fourth quarter against San Jose on Saturday, January 15, 2021 at the Save Mart Center. (Wyatt Bible/The Collegian)

Hanna started the game strong for Fresno State, scoring a basket at the 3-point line.

Early in the game there were times when zone defenses left Hanna open, resulting in the Bulldogs having some open corner shots. White said her players were successful at reading the field and capitalizing on gaps in the Spartans’ defenses.

“I think I’ll just take what the defense gives me and make sure there’s pressure on the defense as well,” Hanna said

Fresno State athlete Amiee Book also got her shots over the arc. After just 15 seconds into the final quarter of the game, Book scored her final shot at the 3-point line, wowing the fans and her teammates.

White explained how the Spartans came back to play this game with a different strategy than Thursday’s.

“The person who lost changes everything,” White said.

Aware of this, the Bulldogs adjusted as if they were playing against an entirely new team.

White also praised the defense and how it went hand-in-hand with her offensive play. The Bulldog defense stood out and helped them secure more hoops in the fourth quarter.

“We definitely had to play better in the second half,” said White.

The Bulldogs came back in the second half and scored 48 points to their 87 total.

“I thought maybe we wouldn’t interfere in the quarter and just get a few more drives, maybe attack the basket a little more,” White said.

As the Bulldog defense started playing aggressively and making contacts, the Spartans failed on offense to allow more rebounds. In the fourth quarter, the ‘Dogs took the lead after overwhelmingly beating the Spartans.

The Bulldogs only had one day between those two games, which limited turnaround time.

Thursday’s game has been postponed from the original date of January 3, 2022 due to health reasons. The Cavander twins explained how these postponements have impacted the team and how they felt upon learning they were being cancelled.

“I think it is very sad. Like we were shut down but I think it made us realize how much we missed it,” Haley said, “I think everyone’s super excited and just want to play those two games because we’ve been free for so long. “

Hannah noted how unfortunate these shifts were, especially because she wanted to play in Wyoming, but said they focus on the sport in every practice session.

“The games will be canceled and we can’t control that, but we can control how hard we practice and prepare and I think March will show that,” Hannah said.

The Bulldogs next travel to Colorado for the conference game against the Air Force on Wednesday, Jan. 19, with the pick scheduled for 2 p.m

Two shots in the car in Stockton – CBS Sacramento