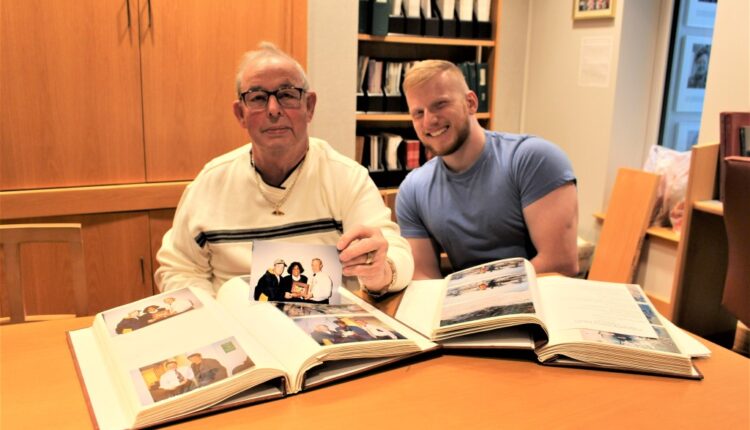 GALLOWAY – When Michael Ofsanko signed up for Gail Rosenthal’s Holocaust and Genocide Education class at Stockton University he had no idea he was following in a family tradition.

“I needed a W2 (writing) elective and I like history,” said Ofsanko, a biology major from Lacey Township who plans to become a physical therapist. “After I registered, my mom looked and said she had taken that class. She said her father had also taken the class and had gone to Israel. So I called my grandfather and he said yes, the class was with Gail Rosenthal.”

Ofsanko’s grandfather, John Dominy, who lives in Lanoka Harbor, joined Ofsanko for a reunion with Rosenthal, who is director of the Sara and Sam Schoffer Holocaust Resource Center at Stockton, to reminisce about the course and its relevance today. Dominy brought along a scrapbook of photos he saved from the Stockton Study Tour to Israel in 1999.

Dominy enrolled at Stockton in 1994 after dropping out of college as a young man. He graduated in 1999. His daughter, and Michael’s mother, Sharon Ofsanko, also graduated from Stockton.

“Both of my parents died, and when my mom died I put my high school ring in her casket and promised her I would finish college,” Dominy said. “I had started at University of Pittsburgh, then came to Stockton when I was 55.”

Dominy said he took Rosenthal’s course because he had always been interested in World War II and the Holocaust, and the course included the opportunity to travel to Israel, a trip that made a huge impact.

“I remember talking to survivors here and in Jerusalem,” Dominy said. “There was Ruth Brand, who had climbed out of a pit and survived when others were shot, and Hannah Pick Goslar, who was a friend of Anne Frank.”

The trips have been temporarily put on hold because of the COVID-10 pandemic. Rosenthal said she tries to connect real-life experiences to the lessons of the Holocaust.

Associate Professor of History Michael Hayse, who also went on the trip to Israel, said study tours have a huge impact on students.

“It gets them out of the American bubble to see other parts of the world,” he said.

Ofsanko said the topics of the course are difficult, but important. He is surprised at how many people of his age don’t know that six million Jews died in the Holocaust, or even who Emmett Till was and his importance to the civil rights era.

“I taught a friend about Emmett Till,” said Ofsanko. “To me, the lesson is what ignorance can lead to. What is the impact of indifference?”

Dominy said he still remembers the Holocaust theme of “never forget” and how relevant it remains today. He and Hayse looked at his scrapbook of the trip, remembering where they were and who they met.

Rosenthal said it is important to link events from the past to the present and to the students’ own histories.

“I try to relate students to their own personal past and what is part of our American history,” Rosenthal said. “It is crucial that we keep sharing these lessons with future generations.”

Journalists Recap News on Reproductive Health, From the Abortion Debate to C-Sections