‘It’s definitely a dream job’: Riley Stockton, who sneaked onto Hoopfest courts at age 6, gears up for his first as executive director 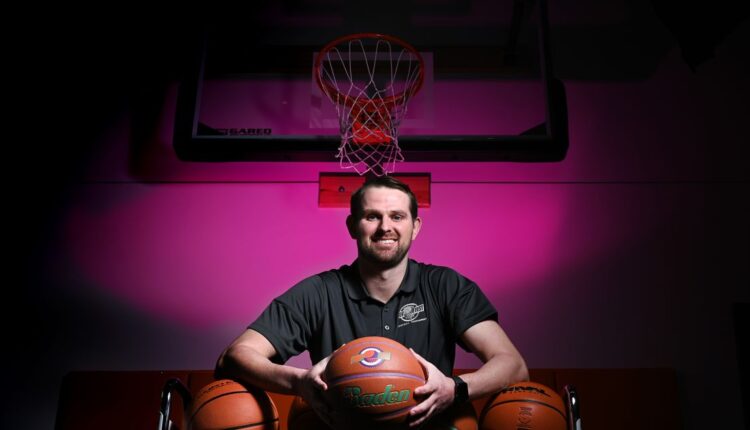 Quite obviously, the Stockton name is synonymous with basketball in Spokane.

One of them, Riley Stockton, ventured across the Cascade Mountains for the last decade to attend college, play some hoops and start a career. But he is back as executive director of Hoopfest and couldn’t be more thrilled.

“I’m a Spokane kid and grew up in this organization,” he said in April, just three months into the job. “I played in AAU and played in Hoopfest since kindergarten.

Riley’s brother, Shawn, played at Montana and was a part of a state championship team at Ferris High School. Another brother, Steve Jr., played at Whitworth.

Riley’s uncle, John, is the patriarch, having played at Gonzaga prior to a Hall of Fame career in the National Basketball Association with the Utah Jazz. His sons, David and Michael both played collegiately at Gonzaga and Westminster College, respectively, and David is currently playing professionally. Another one of John’s sons, Houston, played football at Montana.

And like his brothers and cousins, Riley grew up on the streets of Spokane at Hoopfest. He’s played in the tournament for 14 years, the first time as an underaged 6-year-old. The most recent came as a college graduate when he played with his brothers in 2019. In the first eight, David was his teammate, then Riley had to take a break while playing collegiate basketball at Seattle Pacific University.

“It’s funny, I’ve only ever played with family members at Hoopfest,” he laughs, saying he’ll be too busy this year to play in it. “This year will be a different one, but I’m looking forward to it.”

He remembers his first Hoopfest, with his court on Main Street in front of the now defunct Rocky Rococo’s pizza restaurant. He was only six.

“I was a bit of a chubby kid when I first started, so I looked a little older,” he remembered. “One lady yells, ‘Where is his birth certificate,’ thinking I was too old. My mom had it, and goes, ‘He’s six!’”

His experiences at Hoopfest – and not to mention his basketball acumen and last name – made him a natural fit for Hoopfest. And for other reasons too.

“The addition of Riley has been an enormous win for us,” says Rick Betts, a co-founder of the event and now chair of the Hoopfest board of directors. “He’s clearly a basketball guy, but you also need a person who is going to log in every day all day and work hard. You really only see the fruits of the labors for two days out of the entire year. Probably a lot of people think we fire it up in May to get ready for Hoopfest, but they don’t know it’s a massive amount of work all 12 months of the year.

“He brings a ton of passion, hard work and skills.”

“We were in Spokane for six years, so we understand the magnitude of Hoopfest and how great of an event it is,” Leep said. “Now, having a SPU graduate being in charge of it all is pretty cool. It’s a collision of two worlds I’ve been a part of.

“He’s going to approach the job the same way and with the same mentality he had as a player,” he says. “Each and every day he gave us the best effort he could and found a way to be productive. There is a toughness that comes with that family, and he did everything he could to live up to that reputation.”

Taking over for Matt Santangelo in January of 2022 – after Hoopfest was canceled in both 2020 and 2021 – Stockton hit the ground running. In his first month, he worked with board and staff on policies moving forward – especially how the organization was going to handle refunds in the future.

Just after he began his new job, he also had to endure a public outcry over his uncle’s well-publicized anti-vaccination opinions. He shrugged that off though, and respects that all people are entitled to their own views.

“He’s been so good to me all my life – he’s coached me and mentored me through some things,” he explained. “I wouldn’t be in this seat without him. I try to avoid the topic and it’s tough to talk about it, but I know people have different views. At the end of the day he’s still my uncle.”

Like his brothers, Riley starred at Ferris High School before putting together his own sensational collegiate career across the Cascade Mountains at Seattle Pacific. In his four years there from 2011-2014, the Falcons were an astounding 100-26 under head coach Ryan Looney and Leep as his assistant. And Riley played in all 126 of those games and finished as the winningest player in SPU history.

Stockton had to choose between football or basketball to play in college. Playing for Gonzaga was out of reach, he admits, and he had some interest from Big Sky Conference schools. But when SPU offered him a scholarship, he jumped at the opportunity.

It wasn’t all without blood, sweat and tears. And Leep remembers the blood part most of all during a practice situation when he was on the same scout team as Stockton during his ascension to a starting position at SPU.

“He drove the ball in and kicked it out, then was backpedaling as I was coming in to rebound,” Leep explained. “The back of his head smashed right into my nose — it was going in a different direction and blood was going everywhere. You could only laugh and say, ‘Well, that’s what happens.’”

The fact Stockton played 4,054 career minutes – the most ever in the 71-year history of the program – shows its durability. He started the last 100 games of his career, with SPU winning 80 of them. Overall, the Falcons were 85-23 in 108 total games with Stockton as a starter.

“We were very successful – we put a priority in winning in everything in life,” he says. “School, practice, playing and even relationships were all about how you could get better. We had a lot of competitive people involved and it all worked out.”

He had 904 total points in his career, but he was better than a rebounder (737) and passer (444 assists) to rank eighth all-time in the GNAC in both categories. He also had 155 steals and 50 blocked shots. At 6-foot-4, Stockton was the shortest player ever to lead the league in rebounding.

“It was all about winning and doing what the team needed,” praised Leep, who took over as head coach May 3, 2016, when Looney left for Idaho State. “What a great set of traits he carried to his career – he does whatever is needed to make sure the job not only gets done, but gets done successfully and at a really high level.”

Stockton was the 2015 Great Northern Athletic Conference Male Scholar-Athlete of the Year, which capped an honor-filled career. In 2013 and 2015 he was the GNAC Defensive Player of the Year, and earned first team All-GNAC honors as a senior when he averaged 10.1 points, 6.2 rebounds and 4.0 assists.

Stockton had a 3.84 grade point average in college, and knew the honors and victories came as a result of having a team of players all on the same page. “They always recruited like-minded players who cared as much about school as they cared about hoops,” he said.

The triumphs were certainly plentiful, and his career started innocently enough on Oct. 27, 2011, when SPU knocked off 16th-ranked Arizona 69-68 in an exhibition game. Stockton had four points and two rebounds in 28 minutes as the Falcons stunned a Wildcats team which had reached the Elite Eight of the NCAA Tournament the year before.

In both 2012 and 2013, the Falcons won two national tournament games, but both times their season ended with a loss to Western Washington.

As a senior, SPU advanced to the NCAA Division II Playoffs for the 11th-straight year, qualifying when their backs were against the wall. The Falcons won both of their games in the Great Northwest Conference Tournament – including a victory over his nemesis, Western Washington in the title game.

“We were led by Riley of course — that team came together at the right time,” remembers Leep. “He was able to step up and just be himself and the natural leader he is. He carried us, and it was really never with his scoring. He could take over and contribute to a game in so many other ways with his defense and ability to rebound. He was never the best shooter in the world, but doggone it, if there was a big shot to be made, Riley would make it. He was everything that the team needed and what the moment called for.”

Seattle Pacific opened the national tourney with an 81-69 win over BYU-Hawaii before bowing out. Stockton’s career came to an end on March 14, 2015, with a one-point loss to Cal Baptist in which he had a team-high 15 points, eight assists, two steals and two rebounds. And, oh yes, he played 38 of 40 minutes.

“All I really wanted to do was to stay on the court – there is nothing better than playing 36 or 38 minutes a game,” he says. “I also played with great players, so I didn’t need to score a lot. I knew who to get the ball to and who I needed to defend.”

Stay on the court he did, and it added up to a ton of respect from Leep that will last a lifetime.

“It’s funny how the relationship evolves with a coach in recruiting, then coaching him and now really just supporting him and considering him a friend,” he said of his relationship with Stockton.

Besides playing two years professionally in Spain, Stockton stayed in Seattle to put his business administration degree from SPU to work. With management and marketing specializations, he worked for Special Olympics Washington in operations and logistics.

He helped the organization host the USA Games in 2018, then was director of sport development for the company from August of 2018 to January of 2022. He then took over for Matt Santangelo as Hoopfest’s leader, landing his dream job back in his hometown.

“He’s probably played in more Hoopfests than he can count. Now to be in charge of all of it is a pretty cool role for him,” Leep said proudly.

One dead, one badly hurt in Fresno County crash