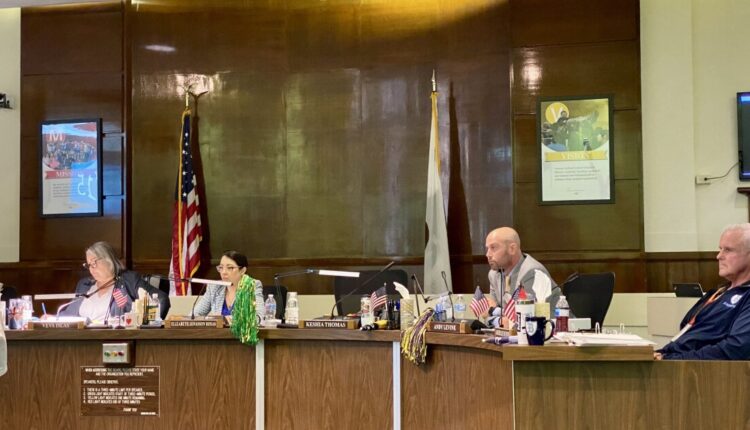 Fresno Unified Trustee Keshia Thomas is bustling around her office in downtown Fresno’s old Security Bank Building. She’s just returned from a mid-week lunch with the Black Student Union (BSU) at Edison High School, in the area she represents. “I felt like my kids needed me,” Thomas said.

The meetup came in the wake of recent racist incidents on campuses across Fresno Unified. Students have reported an increase in racial harassment since a social media photo circulated of a Bullard High student wearing what looked like a KKK hood.

While students from Edison and Bullard have been the most visible in speaking out against racism, Thomas said every school is affected. Thomas plans on visiting students from every BSU in Fresno Unified. The previous week, she met with the kids from McLane High School. “McLane’s BSU is awesome. And they just wanted to make sure that we understand that they are a part of this fight as well,” she said.

Although Thomas said racism on district campuses is nothing new, the way students have mobilized in the last few weeks has made her feel proud. “Just for finding their voice. You know, it takes a lot of courage,” she said.

On May 6, hundreds of students representing Edison and Bullard marched downtown in response to the Bullard photo. Thomas said she was impressed by how students mobilized. “They had an agenda. They had a map of where they would walk and how they would get there. They had parents bringing them across town so they could be a part. You know, that was a historical moment,” Thomas said.

Students stand in support of Bullard BSU president, Tatiana Asberry as she speaks at Fresno Unified Board meeting, May 18, 2022.

At a Fresno Unified board meeting following the protests, Bullard’s BSU president Tatiana Asberry said her school didn’t do enough to respond to the incident.

“Literally the second day after all this happened, no one asked us if we were okay, or if we really actually felt comfortable to go back to school,” Asberry said.

One of Asberry’s main concerns was safety and addressing threats of violence and bullying at school. “While going to school I’ve had students say things towards me specifically, and say the N-word towards me and point and smile at me,” she said.

Trustee Thomas said representation was a major topic of discussion at her lunch with Edison students. “That was one of their asks, ‘Can you have more people that look like me?'” she said.

According to the Fresno Unified Teacher Development Department, Black students make up about 8 percent of the school district. But Black educators make up less than 5 percent.

“When you see yourself in your teacher or your mentor, then I think it just opens up a lot of different conversations,” said Andy Levine, newly elected trustee in the Fresno High area.

He said the district is making an active effort to hire a more diverse staff. Fresno Unified was just awarded a $12 million grant from the California Commission on Teacher Credentialing to expand its teacher residency program starting in June.

“These are really important conversations to make sure our African American students and our students of color and just most vulnerable students in general are really being prioritized and protected at this moment,” Levine said.

There may also be additional funding to hire more diverse counselors, too. Levine says this grant will have a specific focus on hiring Black educators.

“I don’t think there’s been an explicit intentionality around addressing under-representation of African-American teachers in Fresno Unified. So, this, I believe, is the first time that we’ve done that and I’m really proud that we’re taking that step,” Levine said.

But Keshia Thomas questions whether that will be enough to meet the needs of Fresno Unified students. “We need to be able to have sufficient funds to train them. We need to have sufficient funds to be able to help them move,” she said. There are so many ‘and then’s,’ you know. How much is $12 million really going to help our district when we have a billion dollar budget?”

According to Levine, a lot. The grant could lead to hiring 48 potential new teachers for Fresno Unified over the next five years.

And in the meantime, Thomas said students have learned to lead their own way, including voicing their needs with the administration. “So they’re telling the adults, ‘Hey…you look like you need help. So here, let me help you. Let me tell you what we need,’” Thomas said.

With graduation coming up, many of the students who are leading the movement will be off to college soon. But the work doesn’t end with their departure.

Thomas said students discussed ways to stay involved, even after they leave campus. That includes building a mentorship pathway so that they can work with students still in Fresno Unified. “There’s so many different ways for us to be able to communicate now that it doesn’t make sense for them just to be gone to college and then nothing happens,” Thomas said.

Soon it will be the next class of student pushing leaders for representation and accountability.