Latinx and LGBTQ+ artists in Fresno embrace culture through art 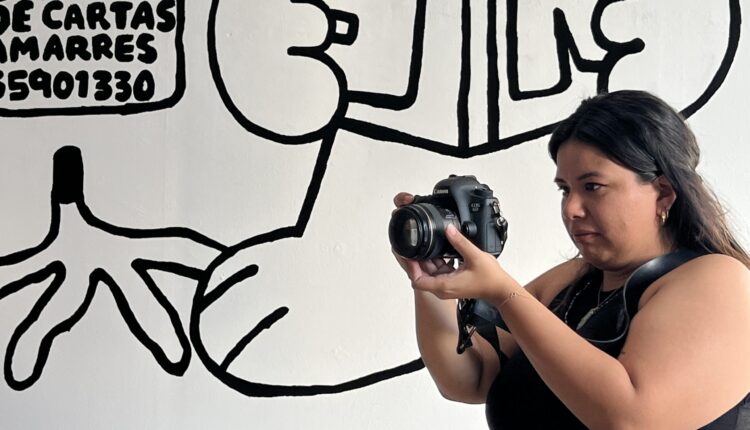 Meli Flores grew up in Inglewood and Compton before moving to the Central Valley four years ago.

Flores, who goes by she/her and they/them pronouns, grew up watching her family take numerous family photos and home videos, which led to her wanting a camera of her own.

“My parents heavily documented our lives growing up in a very natural way [that] transcended into my own life,” Flores said.

At age 14, Flores was gifted her first digital camera by her parents. At the time, she was excited to learn, but not interested in pursuing photography as a career.

It was the desire to create her own image and document her own experiences that inspired her to embrace a future behind the camera.

Aside from her bringing up in LA, Flores also attended and received a degree from UC Berkeley, and also studied abroad at the National Autonomous University of Mexico (UNAM) in Mexico City.

“Jumping around from place to place growing up was hard, but photography has been that one thing to [help me] remember those moments and to share them with other people even if they haven’t been there,” Flores said.

It was during Flores’ time in college that she realized her true passion, which also became her main photography subject.

“In college, I saw the importance of documenting the history of the Latinx and LGBTQ+ community,” Flores said. “These are communities where a lot of our history is whitewashed or written in certain ways, and not written from our perspective.”

Flores said that as a result, she strives to capture her culture’s laughter and joy through her photography, rather than the media’s typical portrayal of Latinx communities that often focuses on showing conflicts surrounding the border and immigration. The vibrant colors emphasized in her photography are meant to represent the fullness of life in Latinx cultures and the pride of the LGBTQ+ community.

“For the Latinx community, it’s important to show us in love, celebrating and being joyous,” she said.

As a self-identifying Guatemalan and Mexican American Chicana who is also queer and nonbinary, Flores said sharing her unique perspective is particularly important.

Fresno State studio art senior Gabriella Stempien, who goes by they/them pronouns, is also a nonbinary, Latinx artist who believes in the importance of showingcasing nonbinary and queer artistry.

Stempien grew up going to Fresno State art classes with their father, which they said was due to the struggle to afford childcare at the time.

Stempien recalled that professors were understanding about her joining her father’s classes, often letting Stempien participate in all of the art assignments. It was an early start to what would become a lifelong attachment to the university.

“Since I was a little kid, I would always idolize Fresno State,” Stempien said.

Now as an artist of their own, Stempien enjoys using vibrant colors and intricate patterns, while also incorporating the color black.

The artist described themself as having two sides to their artistry, both presenting their own struggles.

“I’m currently working on my first oil self-portrait in class and it was really difficult, versus me working on something in my own home with fluorescent paint and bright colors, [where] I’m just moving fast and aggressively, and just painting with a lot of emotion,” Stempien said. “Rather at school, I’m more meticulous and relaxed.”

After coming out as nonbinary in 2019, Stempien said that they encountered unaccepting family members and became increasingly aware of the lack of nonbinary representation in media.

“Being nonbinary, it’s this feeling of not really having a representation of myself in the media at all. I have met very few people in my life who have they/them pronouns, or any other kind of pronouns that align with that,” Stempien said. “But you know we aren’t represented at all.”

Like Stempien, Flores faced her own coming out adversity among family members, but said she hasn’t let it stop her from capturing and sharing the images of the minority communities she belongs to.

In 2014, at the age of 19, Flores made the decision to come out to her parents. It was a moment she remembers as both freeing and sad, particularly because her parents went nonverbally with her for four months afterwards.

Following this sensitive time, Flores left for Mexico City, where she was able to capture many of her first experiences as part of the LGBTQ+ community.

“It was really hard because I had to find a family outside of blood internationally during that time,” Flores said.

Flores said that a few years later her parents grew to not only accept her for who she was, but now even help her set up at ArtHop in Fresno.

Flores recalled the first time she set up in front of the Fresno Economic Opportunities Commission (EOC) LGBTQ+ Resource Center and became emotional while sharing how scared she was for her mother to see her photographs featuring the LGBTQ+ community.

“I was really scared about my photography. My mom walked up behind me and I freaked out, but she liked them and started helping me arrange it. Immediately when she left I broke down crying,” Flores said. “For my mom to touch my art and pick it up – there are no words for it.”

As part of the LGBTQ+ community, Flores said she wishes that more diversity was featured in the media, which is an issue she doesn’t take lightly.

“A lot of times in mainstream media they show a very privileged perspective [of an LGBTQ+ life]with two white gay men in [San Francisco] living their best life with a dog and maybe their adopted child,” Flores said. “I feel with a lot of the queer and trans community that I come from, a lot of us come from broken homes and broken hearts.”

Flores said she hopes her photos capture a balance of both tragic and celebratory stories, sharing and capturing life’s most authentic moments.

While working in Fresno, Flores has shot photos for weddings, bridal shoots and quinceaneras, but said she now wishes to transition away from event coverage and into more of her artistry.

“Now I just want to focus on my art, which is LGBTQ+ photography, doing the photo booths at ArtHop and really investing and collaborating with other photographers and artists,” Flores said.

Stempien also began selling their art at pop ups on the side of the street in 2017, and now owns a 250-square-foot studio in Downtown Fresno. They encouraged artists to be gentle with themselves in their quest to mastery.

“In order to make good art, at first you have to make mistakes,” Stempien said.