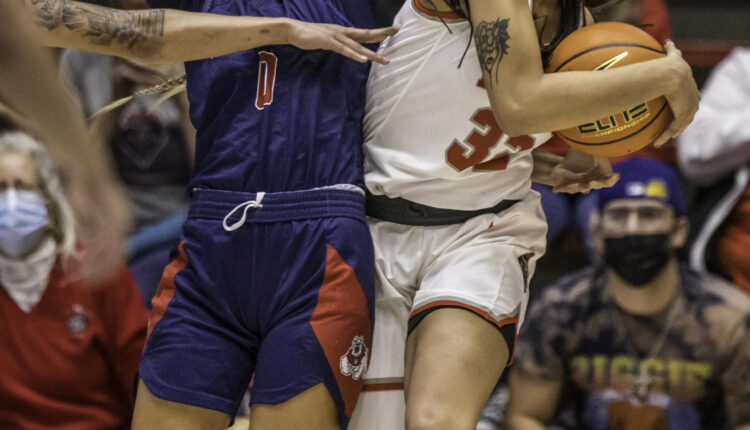 Antonia Anderson wasn’t happy with her University of New Mexico women’s basketball team’s performance in the first half on Saturday.

She did something about it.

Anderson hit a double-double (22 points, 11 rebounds) and sparked a second-half comeback that led the Lobos to an 80-74 win over Fresno State in the pit. The super senior scored 15 points in the second half and made several key games as UNM (16-4, 7-0 Mountain West) extended their winning streak to eight games and improved to 10-0 at home this season.

New Mexico was 47-38 at halftime and up to 11 points early in the third quarter, but turned things around behind Anderson, Paula Reus (19 points) and LaTora Duff (17 points). UNM coach Mike Bradbury (left) presents Antonia Anderson with her plaque for most paid games in UNM program history and a trophy for achieving 1,000 career points. (Mike Sandova/For the Journal)

Anderson, who had a memorable day in more ways than one, agreed.

“The first half was like we were just going over the moves,” she said. “In the second half we defended better, rebounded better and got into our style of play.”

After the game, Anderson received a glassed basketball and plaque of honor as many fans applauded the announced crowd of 4,751. The ball commemorated Anderson’s joining the UNM 1,000 Points Club (officially accomplished on the team’s most recent road trip). The plaque marked Anderson’s program record for the 135th game played, surpassing the previous mark of 134 set by Angela Hartill (2005–09).

“Amazing,” Anderson said of the day as a whole. “The milestones mean a lot to have my name engraved somewhere here. It always feels good to win, too, and Fresno State is a tough team to beat.”

The Bulldogs (7-10, 3-3) have had a rollercoaster season after being picked to win the Mountain West regular-season title. Nonetheless, they brought much fighting into the pit.

Twins Haley and Hanna Cavinder had 36 points combined, Wytalla Motta had 21 points and 11 rebounds, and FSU used a dominant second quarter to effectively calm the home crowd. Haley Cavinder finished the tournament with her second straight triple-double (21 points, 12 rebounds and 11 assists), while Hanna had 15 points and six assists.

UNM led 22-19 after a quarter, but the Bulldogs used a barrage of offensive rebounds, 3-pointers and nifty back-cuts to edge the Lobos 28-16 in the second. FSU held a 15-0 advantage in second chance points at the break.

Motta, a 6-foot-older forward, gave the Lobos bouts with 15 points in the first half.

“We couldn’t guard her,” Bradbury said. “The twins deserve every word they get, but Fresno State has other good players.” UNM changed the tempo, switching to ball sieves and trapping in the second half, making it difficult for FSU to get the ball inside. The Lobos also turned to Anderson, who scored 11 points in the third quarter. Her steal and layup cut Fresno State’s lead to 56-55 with 44 seconds left and got the crowd going all out.

Reus then hit twice inside and LaTascya Duff lost two 3s during a 12-3 run in the fourth quarter that gave the Lobos the lead to stay. Reus’ 19 points surpassed her season high of 17 points last week in Colorado State.