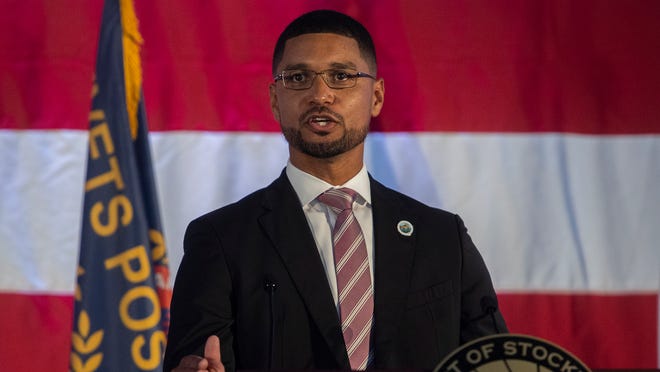 About 700 people gathered at the Port of Stockton’s Rough and Ready Island to listen to Mayor Kevin Lincoln give his State of the City address, the first to be in-person since 2019.

“Stockton will become the best city in America to live, raise a family and grow a business,” Lincoln said. “We will be the example for the rest of the nation to follow for living in a post pandemic world.”

The US marked a grim milestone of 1 million COVID-related deaths last week. Lincoln mourned the about 1,100 community members who’ve died out of over 70,000 cases.

Homicides are up 62% on the year in Stockton. Lincoln emphasized that city staff and the public safety departments are working diligently to address the spike in gun violence and that police have ripped over 388 guns off the street so far this year. He called for an end to “senseless acts of violence” that has claimed 21 lives so far this year.

“On Jan. 31, the city of Stockton suffered another loss … Capt. Max Fortuna,” Lincoln said. “On April 18, we lost an angel, a 15-year-old young lady in Lala Reynaga … one life lost to senseless acts of violence is one too many.”

Lincoln recalled a moment in March outside King Elementary where the city brought out ice cream trucks, food and resources to a neighborhood rattled by a recent homicide. He said he spoke to a resident for about 20 minutes who appreciated the drinks and resources, but the city needed more.

“She said, ‘The reality is, we’re not thirsty, we’re tired,’ ” Lincoln said. “We’re going to provide the safety and security that is needed for our residents.”

Lincoln’s lofty goals for Stockton begin and end with the youth of the city. The mayor said Stockton is now the 11th largest city in California where nearly 30% of the city’s population is younger than 18 and more than half is younger than 35. He acknowledged the 30 young high school leaders in the crowd and announced a scalable $4.3 million Stockton Youth Workforce Development Program to increase the field of young, qualified professionals in Stockton.

“The future of Stockton is in our youth. … We see you, we care about you, and you are a priority of this city,” Lincoln said, who has two teenage kids himself. “You are the future leaders of the community. … This is your city just as much as anyone else, and I’m proud of each and every one of you.”

Lincoln spoke to the many economic development initiatives that have helped Stockton’s unemployment rate come back from 17% during the height of the pandemic to a projected 6.2% today. He emphasized that organizations rooted in Stockton’s diverse community must have a seat at the table.

“An equitable and inclusive lens must be applied to everything the city does,” Lincoln said.

Lincoln’s State of the City speech comes fresh off his trip to Washington, DC, where the mayor attended an announcement from President Joe Biden and Vice President Kamala Harris on reducing the cost of high-speed internet for millions of Americans. He said the city is making its own equitable investments to the 35.7% of Stockton households that lack internet access.

Stockton’s bankruptcy left the city with millions of dollars in backlogged maintenance. Lincoln said many of the city’s neighborhoods and parks have been long overdue for repairs, renovations and rehabilitation. He highlighted the city’s recent $9 million investment to address 50% of the backlog of sidewalk repairs and 25% of the backlog on tree maintenance across Stockton. The city’s public works maintenance is addressed on a citywide priority basis.

In addition to equity, Lincoln encouraged compassion, particularly toward the city’s homeless population. He recalled an incident with an unsheltered man named Fernando, who had a long conversation with Lincoln, not knowing he was the mayor. Lincoln told him who he was at the end of their conversation and was met with tears and an embrace.

“Every one of our unsheltered individuals has a story,” Lincoln said. “Understanding the complexity of homelessness, we as a community need to unite and take the steps to meet the needs of those like Fernando.”

Lincoln spoke of a city with chronic problems, and a city ripe with opportunity. Stan McFadden will be Stockton’s 50th police chief come June 1. The city has successfully emerged from bankruptcy and has filled its coffers with $78 million in federal American Rescue Plan Act funds to recover from the pandemic and build for the future.

“We have a young city, a city on the rise with a bright future,” Lincoln said. “This is our moment for the city of Stockton.”