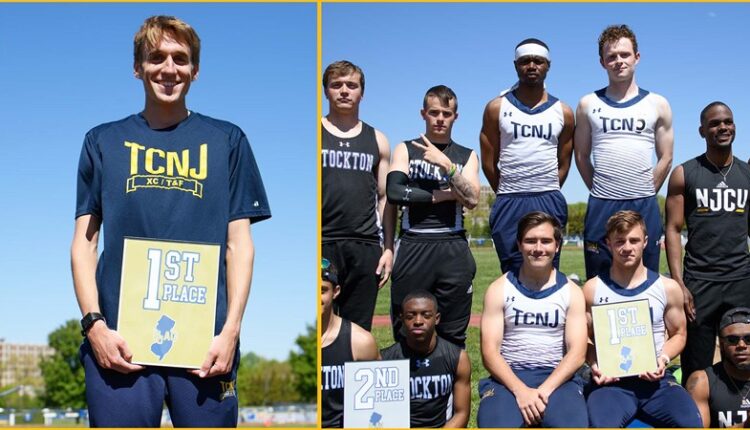 EWING, NJ – A relay title and another from Kevin Christensen helped the TCNJ men’s track and field team to a runner-up finish at the NJAC Outdoor Championship.

The Lions picked up 133 team points to finish behind seven-time reigning champion Rowan, which ran away with the title on the strength of a 300-point meet. TCNJ held off Stockton, which wound up with 128.5, for second.

Tom Domozych, Andrew Lodge, Tyler Scott, and Ray Schmitt gave TCNJ its first outdoor championship in the 4×100-meter relay since 2011 with a winning time of 41.97, enough to nip Stockton by two-hundredths of a second with the 10th-fastest mark in program history.

Christensen became the first TCNJ outdoor 1500-meter champion since Shaun McGeever in 2012 with a career-best 3:54.06, a full second clear of Rowan’s runner-up. The time is seventh best in school history. Michael Rodriguez finished fourth in a personal-best time of 3:57.89, while Tyler Balas placed seventh with a career-best 4:00.78. Stuart Gruters, Sunday’s steeplechase champion, finished just out of scoring range in ninth (4:02.47).

Scott put up the best performance of his career in the 200-meter dash, blazing his way to a huge PR of 21.90 to place fifth and move all the way up to third on the TCNJ all-time performance list.

Domozych collected a fifth-place finish with a time of 10.96 in the 100-meter dash.

Jahmir Anderson, runner-up in the high jump at the NJAC indoor championship, placed fifth at the outdoor meet by matching his career-best clearance of 1.90 meters on his second attempt at that height.

Rychkov, Amoia, Engler, and Burtnett ended the championships with a third-place effort in the 4×400-meter relay, stopping the clock at 3:20.87.