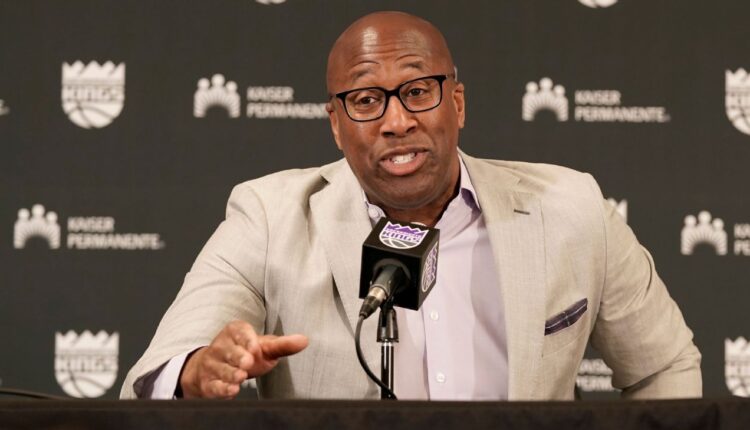 A day removed from the Golden State Warriors’ championship parade in San Francisco, Mike Brown appeared 90 miles up Interstate 80 on Tuesday, reporting for duty as the new head coach of the Sacramento Kings.

“I hope I don’t get in trouble for saying this,” Brown said as he sat next to Kings general manager and president of basketball operations Monte McNair during his introductory news conference. “I really couldn’t turn up like I wanted to because of this daggone press conference today.”

Although his celebration was subdued after his third title in his six years as a Golden State assistant, Brown said he was ecstatic to discuss his fourth head-coaching opportunity after two stints with the Cleveland Cavaliers and a spell with the Los Angeles Lakers.

“The potential here, I truly believe the potential is off the charts,” he said. “It gets me excited thinking about it. … The players here, I’m excited about.

“There’s just a lot of opportunity here for this place to explode, and I want to be a part of it.”

There’s nowhere for the kings to go but up.

Sacramento hasn’t qualified for the postseason since 2006, and finished in last place in the Pacific Division in seven of those 16 years. The Kings went 30-52 this past season, firing Luke Walton midway through the campaign and then dismissing Alvin Gentry from his interim position after they finished ranked 25th in offensive efficiency and 27th in defensive efficiency.

Brown, who accepted the job while the Warriors were in the middle of their second-round playoff series against the Memphis Grizzlies, said he was “heavily involved” in taking over the Kings while still finishing out the Warriors’ championship run. On Tuesday, he revealed a majority of his coaching staff, hiring Jordi Fernandez from the Denver Nuggets, Jay Triano from the Charlotte Hornets, Luke Loucks from the Phoenix Suns and Doug Christie, a former Kings standout whom he played against in college.

He said he used an off day in between the conference finals and NBA Finals to fly down to San Diego and see point guard De’Aaron Fox work out. He calls him “Foxy,” a nickname he gave him in high school when he coached him at a basketball camp.

“Obviously I walked away impressed with his speed, but I thought he was a dog defensively,” Brown said of Fox. “So there’s going to be a lot of pressure on him coming from me, not anybody else, to get back to what I know he can do on this level night in and night out.”

Brown said the Warriors’ defensive success last season despite a roster rife with players with limited defensive reputations shows what the Kings can do on that end.

“People look at Steph Curry, [Nemanja Bjelica]Otto Porter, Jordan Poole, [Andrew] Wiggins in Minnesota, I mean I could go down the line of the personnel that we had with the warriors and people did not think they could defend,” Brown said. “And somehow, someway, we ended up the No. 2 defense in the league. Now, will we be that next year? I do not know. Probably not. It’s going to be a process. But I’m excited about all the guys.”

Brown also checked Davion Mitchell, Harrison Barnes and Richaun Holmes during the news conference, as well as the Kings’ No. 4 pick in Thursday’s NBA draft, as reasons to be encouraged about the team’s future.

“I’m excited about being here in Sacramento,” Brown said. “I have a lot of friends that live up this way. Nobody has told me anything or said anything bad about the area. It’s always been positive. And that’s even before I got the job. So, I’m excited about being in . .. what is it? Sactown. Sacto. Sac. The Big Tomato, something like that. There’s a lot of different nicknames for it.”