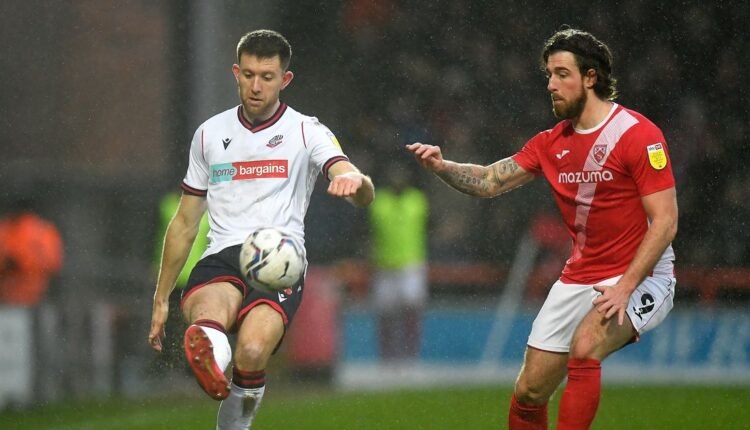 Derek Adams is hoping to tie down star striker Cole Stockton down to an extended contract at Morecambe and make him the club’s top earner to help ward off any potential transfer interest this summer.

Bolton Wanderers were linked with a move for the Shrimps hotshot prior to the January transfer window. Ian Evatt spoke warmly of the striker prior the January but confirmed it was not a deal they were seeking to do at that time, and Wanderers signed Dion Charles from Accrington Stanley as well as Jon Dadi Bodvarsson from Millwall.

The 28-year-old has scored 58 goals for the Mazuma Stadium club since joining from Tranmere Rovers in the summer of 2019. Stockton scored 26 times in all competitions in the 2021/22 campaign, including 23 in League One, making him one of the top scorers in the division.

Stockton’s current deal runs to the summer of 2023, but the Shrimps are seeking to extend his contract and, in the process, make him the club’s top earner. The striker has been mentioned in the same breath as Preston North End, Peterborough United, Rotherham United and Wycombe Wanderers, though Preston’s interest is understood to be wide of the mark.

Shrimps boss Derek Adams has spoken on the future of his star striker and the work taking place to extend his time at the Mazuma Stadium. He expects there to interest in Stockton but believes Morecambe would want more for Stockton than they received for defender Sam Lavelle from Charlton Athletic and from Luton Town for attacker Carlos Mendes Gomes.

Adams told the Lancaster Guardian : “We haven’t had any interest in Cole Stockton, we’ve had no dialogue with any club at this moment in time.

“We have set our stall out in terms of what we want to do. He has got another year to run on his contract and we would like to extend that.”

Of transfer rumours, Adams said: “That’s always going to be the case. The owners have a value on the player, as they have on all the players at the club.

“If someone comes in and offers that money, then they want to be recompensed in the way that they were with Sam (Lavelle) and Carlos (Mendes Gomes) last year. They will, however, be looking for more money than they got for both of those players.”