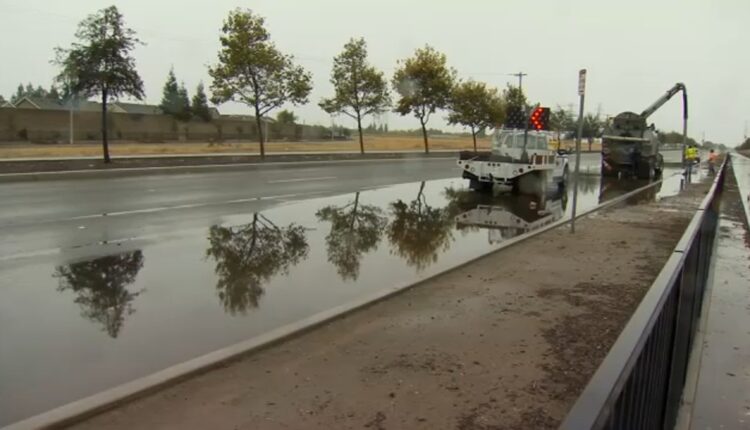 Fresno, Calif. (KFSN) — A major storm is moving through the valley, dropping more than a half inch of rain so far.

City of Fresno Public Works crews spent the day responding to clean-up service calls and clearing drains like the one at Herndon and Polk.

Roadways are slick — officials are also keeping a close eye on highways as this storm continues.

Elizabeth Yelton with Caltrans District 6 says her crews were getting prepared over the weekend.

Umbrellas were up as the rain came down in downtown Fresno.

The standing water on city streets is creating a number of potholes, which can be hazardous to drivers.

Officials say in conditions like these, it’s important your vehicle is maintained — that includes replacing your windshield wipers.

“Someone can either take a photo or with GPS, they can report exactly where the incident is occurring, where they’ve seen that,” he said. “It also provides good tracking so that when we take care of the issue, that report goes right back to the citizen, right back to our constituent.”

Over in Clovis, the city is handing out sandbags.

On Monday, multiple power outages were reported throughout Central California — many of them weather-related.

“Not every outage is necessarily associated with the storm system,” says PG&E spokesperson Jeff Smith. “We are seeing a few outages associated with this rain, not too many in Fresno yet. We do want to encourage our customers to get prepared because there is more weather coming through.”