On to the Regional Quarterfinals 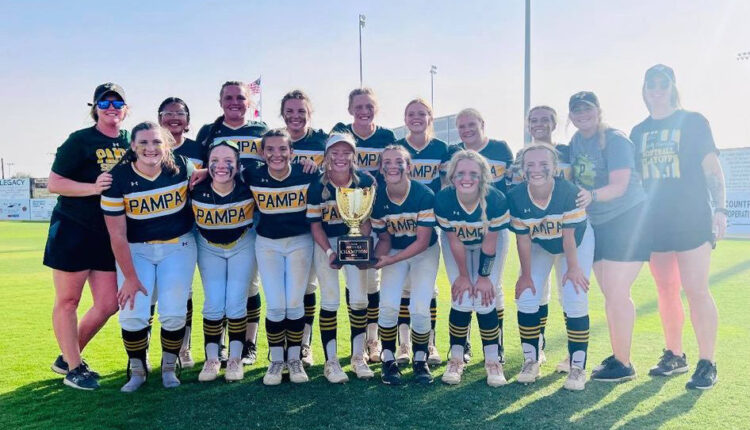 Fresh off a Bi-District Championship last weekend in Lubbock against the Snyder Lady Tigers, the Pampa Lady Harvester softball team got off to a good start by beating the Fort Stockton Prowlers by a score of 10-1 in Game 1 in the area championship being held in Snyder.

Lady Harvesters take game 1 vs Fort Stockton in Area Round

Pampa started off quickly and never let up by scoring two runs in the bottom of the first inning. Freshman, Maecie Hawthorne hit a one-out single, Freshman, Brianna Cloud followed with a double putting runners at second and third. Sophomore, Kynleigh Kirby followed that with a double that scored Hawthorne and Cloud.

In the 2nd, Pampa would add a run after Freshman, Carsyn Hunt reached on a 2-out single, and scored on a double by Maecie Hawthorne. At the end of 2 innings the score was Pampa 3 and Fort Stockton 0.

Pampa would add three more runs in the 3rd inning when Kirby led off with a double, and Junior Hallie Hawthorne walked. Freshman Mckinley Daniels would courtesy run for Kirby and Daniels and Hawthorne advanced on a throwing error by the catcher. Daniels would later score on a passed ball and Hawthorne would score when freshman Cambree Dyer hit a single to left field. Dyer would eventually score on a sacrifice fly from Hunt. At the end of 3 innings, the score was Pampa 6, Fort Stockton 0.

In the bottom of the 5th, Pampa would add an insurance run, when Cambree Dyer singled, and eventually scored from third base on a passed ball. After 5 innings, Pampa found themselves on top 7-0.

In the 6th, Fort Stockton would score their only run, but Pampa responded with 3 more runs in the bottom of the 6th. Hallie Hawthorne walked, Junior Reagan Dyer singled, Cambree Dyer singled in Hawthorne, freshman Cassidy Stanhope was hit by a pitch to load the bases. Freshman Briley Daniels would draw a walk that scored Reagan Dyer and Cambree Dyer would score on a wild pitch. Pampas 10, Fort Stockton 1

Fort Stockton would load the bases in the 7th, but would be unable to score and the game would end up Pampa 10 and Fort Stockton 1.

Kynleigh Kirby pitched 7 innings, giving up one run on 5 hits, striking out 7 and walking 5. In the 6th inning, Kirby recorded her 200th strikeout of the season.

Reagan Dyer made the defensive play of the game when she dove and caught a ball in left-center field with no outs in the 7th inning.

Pampa will take on Fort Stockton in game 2 on Saturday at 1:00 and if necessary, game 3 will start immediately following.

After defeating Fort Stockton 10-1 in game 1 of the Area Championship, the Pampa Lady Harvester softball team would just need to win one game on Saturday down in Snyder, Texas, to advance to the Regional Quarterfinal games against Monahans.

Game 2 started out well for Pampa, in the top of the 2nd inning, Kynleigh Kirby drew a lead off walk. McKinley Daniels came in to courtesy run for Kirby. Daniels advanced to second base on a wild pitch and moved to third base alertly on short fly ball to left field. Daniels would eventually score on a 2-out single by Cambree Dyer.

However, the lead was short-lived. In the bottom of the 3rd, Fort Stockton would score 5 runs to take a 5-1 lead. In the top of 5th and still down 5-1, Pampa would rally for 2 runs when Cambree Dyer led off with a single. Cassidy Stanhope sacrificed bunted and was thrown out first base, Dyer alertly went to 3rd base when nobody covered the base and would score when the first baseman attempted to throw her out at 3rd base. Briley Daniels followed with an infield single, and then stole second base. Carsyn Hunt then hit a double to left field scoring Daniels. At the end of 4 ½ innings, Pampa would trail by a score of 5-3.

Stat Round Up Game 2

With the Area Championship on the line, Game 3 would not disappoint. Battling temperature over 100 degrees, Pampa would score first in the top of first inning.

Carsyn Hunt led off with a single, Maecie Hawthorne drew a walk and Brianna Cloud singled to left field to load the bases. Kynleigh Kirby would hit a pop up into short right field, which was ruled in infield fly rule so the batter was ruled out. However, the 2nd baseman dropped the ball, and Hunt would alertly score from third base and Hawthorne and Cloud would advance to 3rd and 2nd. With 2 outs, Cambree Dyer continued her hot streak with n RBI single that would score Hawthorne.

Fort Stockton would add a run in the bottom of the third to make it a 2-1 game. In the top of the 4th, Pampa would add another run, when Hunt hit a one-out single to center field, would steal 2nd base and eventually move to third on a wild pitch. With two outs, Cloud lined a 3-0 pitch for a double to left center field that scored Hunt from third base, giving Pampa a 3-1 lead.

Fort Stockton would add a run in the top of the 5th to cut the lead to 3-2, however they would leave the bases loaded in the bottom of the 5th.

In top of the 7th and Pampa clinging to a 3-2 lead, Cloud led off by reaching on an error by the Fort Stockton 3rd baseman. With one out, and Cloud at 2nd base, Hallie Hawthorne lined a 1-0 pitch over the center field fence for a 2-run home run and a 5-2 lead.

In the bottom of the 7th, Fort Stockton would get a runner on base, but would not be able to score any runs and Pampa would hang on for the 5-2 win and claim the Area Championship.

With the victory, the Lady Harvesters move into the Regional Quarterfinals against District 2-4A Champion, Monahans. That series will be played at Lubbock Estacado starting Thursday May 12 at 5:30, game 2 will be Friday on May 13th at 4:00 and the if game to immediately follow game 2.

The winner of this series will move into the Regional Semi-Finals to face off against the winner of Iowa Park and Glen Rose.

Stat Round Up game 3

Carsyn Hunt 2-3, 2 runs scored. Maecie Hawthorne drew a walk and scored a run. Brianna Cloud was 2-3, with an RBI and a run scored. Kynleigh Kirby had an RBI. Hallie Hawthorne was 2-3 with a 2-run home run and 2 rbi’s. Cambree Dyer was 3-4 with one RBI. Cassidy Stanhope was 1-2. Briley Daniels was 1-3. In the circle Kynleigh Kirby went the distance with 7 innings pitched, giving up 2 runs on 6 hits. Kirby recorded 9 strikeouts and walked 3 batters.