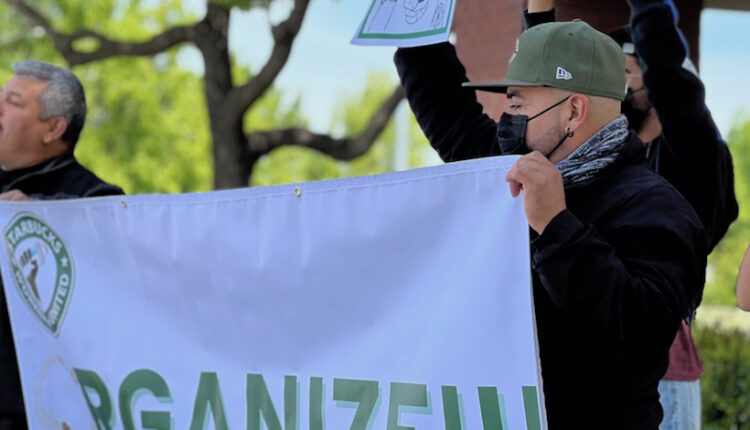 After going public with intent to unionize, Starbucks workers rallied today for “union strong” coffee as momentum builds in Fresno.

Benjamin Takemoto, a team member at the Starbucks at 7010 N. Marks Ave., is spearheading the push for unionization. He says that most of his fellow partners — what Starbucks affectionately calls its employees — are scared to show public support of unionizing for fear of upper management retaliation.

The Herndon and Marks store is the first Starbucks in the Central Valley to send a letter of intent to unionize, but many more are expected to follow in the coming months.

“There’s a lot of partners organizing in the store. I’m just the only one who is comfortable enough writing their name on the letter,” he said. “The others are fearful of retaliation and losing their job for just wanting to unionize.”

Examples of retaliation that workers face include writeups and getting their hours cut, Takemoto said, adding that one partner was even fired. He said he has slowly seen a decline in the quality of the working environment from when he started at the company eight years ago.

“Corporate seems to be posting a lot of information and notices in the back about how they don’t think we need a union,” he added.

Rallygoers encouraged customers to state their name as “Union Strong” for their orders on Thursday.

Fernando Hernandez, lead organizer for the area’s Starbucks unionization drive by Workers United, said that it’s been a struggle to unionize on a store-by-store basis. Opponents tried to convince stores in the Central Valley to petition as a district, but proponents feel that it’s important to vote store by store.

Hernandez says that the Herndon and Marks store could see an election within the next month, although there’s no official date yet.

Unionizing is a growing trend among workers, and Ernesto Reyes, union representative for SEIU, believes it’s important to not forget the human beings behind the successful business.

“We have a shortage of workers, and then the jobs that are available are low paying,” Hernandez said.