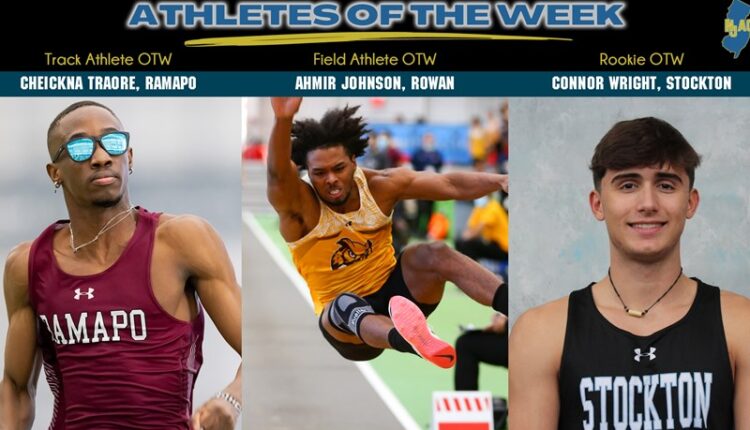 TRACK ATHLETE OF THE WEEK

Traore picks up his second and Ramapo’s third NJAC Indoor Track Athlete of the Week honor after national performances at the Lions Indoor Invitational to open up 2023. He ran the nation’s third-fastest time of the year in the 200 meters, clocking a 21.60 to win a race that included Division I and unattached competitors. His time in the 60 meters (6.81) is also among the nation’s top five times this season and second in the NJAC only to his own 6.76 in early December.

FIELD ATHLETE OF THE WEEK

ROOKIE OF THE WEEK

Wright becomes the second Osprey this year to earn NJAC Rookie of the Week honors. He led the Stockton men at the TCNJ Indoor Individual by finishing third out of 16 (first among Division III competitors) in the triple jump (13.95m) and 11th out of 28 (second among D3) in the long jump (6.58m). His jumps both qualified for the Atlantic Regional Indoor Championships. The freshman ranks second in the long jump and third in the triple jump in the Metro Region and is the top rookie in the region in both events.

Sacramento County ordered Wilton to evacuate because of flooding. Here’s why some residents didn’t.