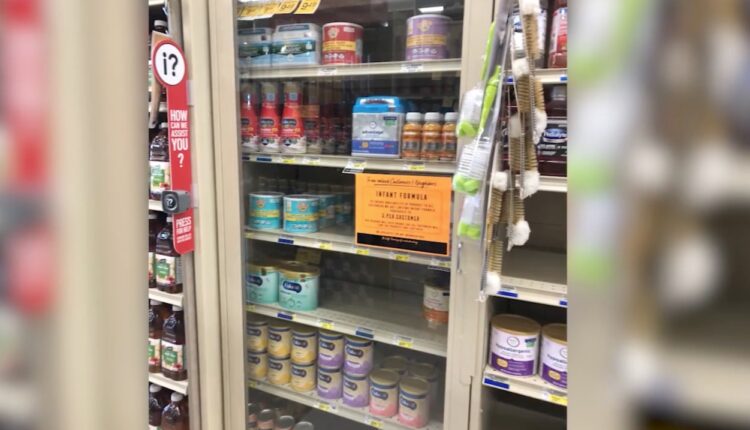 SACRAMENTO, Calif. (KTXL) — The baby formula shelves FOX40 saw in Sacramento and Stockton weren’t completely empty, but many specific product lines or even entire brands were out of stock.

“It is hit and miss depending on stores,” parent Miguel Rodriguez said.

Clarissa Vinson works at a store that sells baby formula.

“I’ll try to stock up for her because I don’t want to run into that problem,” Vinson said, who is also a parent.

Vinson is in a position to get what she needs for 5-month-old Camellia, but she sees some customers struggling to find the specific formula for their baby.

“I feel really bad for them. They’re like, ‘Oh I went everywhere. I can’t find it,’” Vinson said.

While the problem is making national headlines this week, one parent told FOX40 that this is not a new problem.

“You have very limited options, and you have to find a formula at some point. We try and give her organic and things that don’t have any additional chemicals and to find something like that is difficult,” parent Nick Stewart said. “We went to all of the different Targets, asked around, is this something you’re stopping carrying? Or are you at a shortage. They’re like, ‘We’re not sure. We cannot get a lot of formulas in right now.”

That was two months ago when Stewart’s daughter was about 8 months old. He said he was warned when she was born there would likely be a shortage.

“And you sometimes have to make the compromise you don’t want to make of giving them something that is not the best possible nutrition that you can give them,” Stewart said.

According to Datasembly, a company that analyzes retail data, in January, there was already a 23% formula shortage. By last week it was 43%. Datasembly’s CEO said, “This issue has been compounded by supply chain challenges, product recalls and historic inflation.”

“I think it was like a toilet paper situation where people just started buying up the entire shelf so every time you go there would be no formula you would be looking for,” Stewart said.

Stewart described his daughter Berkley as a finicky eater, so simply giving her whatever was in stock was not an option.

He said at one point they used formula for older babies and introduced more solid foods.

“I think that’s the biggest stress, knowing you want to do the best as a parent and not being given the resources to do that,” Stewart said.

AAPI events across the Sacramento region