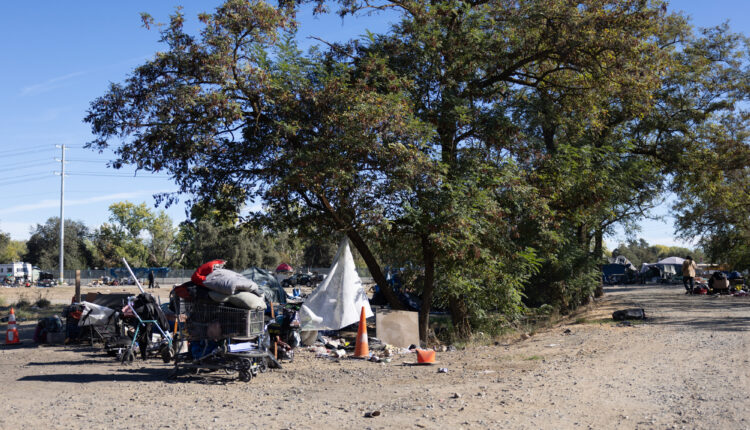 Dolores Sanchez no longer walks from her East Sacramento home to her favorite Midtown coffee shops. She says it’s not safe anymore.

Sanchez says she stopped after she was threatened and cursed at by unhoused residents living in the area’s growing homeless camps, many clustered on sidewalks and near freeway overpasses.

“That really has an impact on my life and that was something that I just absolutely enjoyed,” Sanchez said of her walks. “I would bring people here from out of town, and we would take those walks. That no longer is happening, and it breaks my heart.”

Sanchez is one of many Sacramento residents and business owners who support Measure O, a contentious November ballot measure that would ban homeless encampments from public property citywide and push the city to build more shelter spaces if the funding exists.

Critics say the measure won’t solve the crisis on the streets and would only make life more difficult for unhoused residents by criminalizing homelessness. Proponents, meanwhile, say it will force the city to take action after years of letting the problem spiral and watching quality of life decline.

If approved, the measure would require the city to authorize hundreds of new shelter spaces within 90 days. It would also compel the city to offer available shelter space before enforcement could take place. People residing in camps who reject the offer and refuse to move would face a misdemeanor charge.

With Sacramento voters deciding on Measure O on Nov. 8, Sanchez says it’s not just her well-being at stake.

“I worked with the homeless for 11 years, and I know that they don’t want to be in these camps,” Sanchez said, referring to volunteer work for her church. “So it’s not helping the people that are homeowners, business owners. And it’s definitely not helping these good folks that need a place to sleep and need some dignity.”

“I know a lot of voters are looking for action and I hear that constantly,” Valenzuela said. “But they want action because they want to see results. And unfortunately what Measure O will result in is a lot of the same.”

Valenzuela pointed out that Measure O does not require unhoused residents to accept shelter. Instead, people living in camps could simply move across the street to avoid the misdemeanor charge.

“So what we’re basically signing up for is another cycle of just moving people around,” she said. “It’s a lot of money, it’s a lot of time that our officers and our outreach staff would rather not be spending time and energy just to tell folks to move down the block.”

Measure O’s path to the ballot

The City Council voted in April to place Measure O on the ballot as a compromise after the business-backed coalition Sacramentans for Safe and Clean Streets vowed to gather signatures for a more aggressive initiative. A city ​​staff report said the more aggressive measure would financially cripple the city, costing an additional $192 million in annual spending on shelter spaces beyond the upwards of $40 million the city spends now.

Homeless advocates filed a lawsuit in August to stop the measure from making the ballot, arguing it would violate a federal ruling by criminalizing unhoused people for living outdoors when there isn’t enough indoor shelter. A judge ruled that the measure could be placed on the ballot.

Measure O, also known as the “Emergency Shelter and Enforcement Act of 2022,” is one of several homelessness enforcement measures either proposed or approved by the city and county of Sacramento this year.

Others include the City Council’s decision to Increase penalties for blocking sidewalksits ban on homeless camps near schools and day care centersas well as the county Board of Supervisors’ vote to prohibit encampments along the American River Parkway, schools, libraries and other areas of the board deemed “critical infrastructure.”

The greater emphasis on enforcement comes as Sacramento County’s homeless population and number of encampments have soared in recent years. They 2022 Homeless Point In Time Count released in June found the county’s record 9,300 unhoused people countywide, a 67% increase since the last report in 2019.

‘Myself, I can’t do shelters’

Timmy Stephens Lives in a trailer on Edgewater Road in North Sacramento. He’s been without a permanent home for about a year and says the offer of shelter under Measure O won’t always work.

City outreach workers recently offered Stephens a stall in a city-sanctioned parking lot near Miller Regional Park where he could potentially park his trailer and receive help finding a permanent place to live.

But there’s red tape to sort out and the move might never happen.

Stephens doesn’t have a vehicle to tow the trailer in case of an emergency, as required by the city, and it’s not registered to him. Both issues must be addressed before he can move to the safe parking lot.

The city of Sacramento funds 1,100 shelter spaces, but they’re typically full on any given night. They’re also far short of what’s needed for the city’s thousands of unsheltered residents.

Measure O would initially require Sacramento to approve hundreds more, but only if it has a budget surplus, which the city is not forecasting.

Instead, the city could face a $40 million deficit for homeless shelter funding As early as next summer, City Manager Howard Chan told the council in August. That gap will make it difficult to fund the city’s existing shelter spaces, let alone open new ones, Chan added.

The City Council on Oct. 25 voted unanimously to instead spend roughly $19 million that had been earmarked for new homeless shelter sites on affordable housing, marking a shift in priorities.

Measure O as ‘a first step’

He operated de Vere’s Irish Pub near the state Capitol for more than a decade until it closed last year due in large part to the impact of the pandemic. In an interview, de Vere White said confrontations with unhoused residents that left his staff and customers feeling afraid also contributed to the decision.

“No one is saying Measure O is the end-all, be-all, or is the solution,” de Vere White said. “It’s the first step. It gets the ball moving. Otherwise, a year from now, two years from now, we’re still going to be talking about the unhoused situation.”

If approved by voters, there’s one more hurdle before Measure O could go into effect: The city must first reach a deal with Sacramento County outlining services for unhoused residents.

City leaders have said their budget is limited and that only the county can provide specialized help such as mental health and addiction treatment at local shelters.

Officials from both local governments say they’re cautiously optimistic a partnership agreement will be reached. But less than a week before Election Day, no deal has been announced.