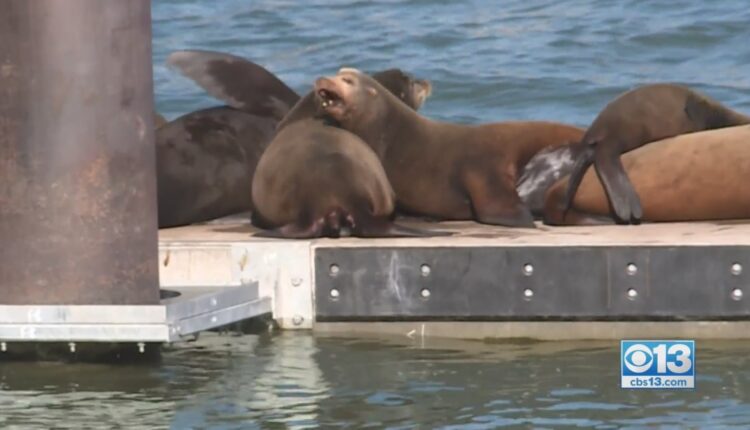 Sea creatures are making quite a splash in the city as families are flocking to the river trying to get a glimpse of sea lions that were spotted in the area.

READ MORE: Beloved Bear Euthanized After Being Hit By Driver In Tahoe City

This herd of sea lions can be heard loud and clear. They’ve been hanging out for several weeks on West Sacramento’s public boat dock — just upstream from the tower bridge. It’s not rare for sea lions to swim this far upstream from the ocean – but many people say they’ve never seen this many in one spot.

“I only see them normally popping their heads up or tails up, so it’s cute to see them all lounging about,” Courtney Clyde said.

Michael Milstein with the National Oceanic and Atmospheric Administration said there’s no mystery why they’re here.

“They want to find food so they can bulk up for the next breeding season,” he said.

Milstein said salmon and other fish are their meals of choice, and while they may seem docile from a distance, people are warned not to get too close.

“They are wild animals,” Milstein said. “They may not look it when they’re laying out on the dock but they are fearsome and they can move really fast. So it’s critical that people keep their distance.”

This is not the first time sea creatures have drawn a crowd to the Sacramento River. In 1985, a humpback whale nicknamed Humphrey swam up past the Rio Vista Bridge. And in 2007, two more humpbacks – Delta and Dawn – made it all the way to the port of West Sacramento.

“I love them. Welcome to the neighborhood,” Clyde said.

MORE NEWS: ‘I’m Pretty Much Out Of Business’: Water Crisis In Yuba County Has Farmers Crying Foul Over Water District

So how long will our friends be hanging out? For the next couple of weeks until they go back to their breeding grounds off the coast of Southern California.