Shafer still in the race for repeat championship at 99 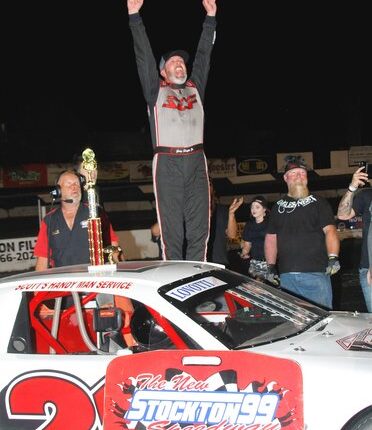 STOCKTON — Defending track champion Gary Shafer Jr., of Stockton, kept his hopes for a title repeat alive by picking up his third win of the season in last Saturday night’s 50-lap feature for the Stockton Late Models at the 99 Speedway.

With only the Oct. 22 race remaining in the 2022 season after last Saturday’s event, the battle for the season title has boiled down to a three-way fight between Stockton’s Jo Jo Stearns, who entered the night with 533 points to lead Stockton’s Ty Carlson (517) by 16 points and Shafer (507) by 26 points in the standings.

Starting in the second row in the 10-car field behind Gridley’s Larry Tankersley and Lodi’s Arron Shankel, the 2016 and 2017 track champions, Shafer wasted little time in disposing of both within the first five laps to take over the race lead.

Shafer had little time to relax because Carlson also moved his way towards the front and immediately began to press him for the top spot. Although Carlson was able to creep under Shafer on multiple occasions he was never able to complete the pass. On one try Carlson got into the back of Shafer and caused him to fishtail, but Carlson elected to back off to allow Shafer to regain control of his car before renewing his attack.

“Ty got me loose, but backed off to let me collect it. I appreciate him racing me clean,” Shafer acknowledged after the race.

Stearns would join the battle in the latter stages of the race after finally negotiating his way around Tankersley, but he was never able to mount a serious challenge to the front runners and settled for third, snapping his two race winning streak.

“Jo Jo was coming at me, but he just ran out of time,” Shafer admitted. “He is a good racer and I expect him to be the next track champion.”

Despite finishing behind his two challengers to the championship in Saturday’s race, after his points for being the top qualifier were factored in, Stearns still holds a commanding 15-point lead on Carlson and 24-point advantage of Shafer going into the “double points” season finale in two weeks.

After starting the 20-lap B-4 main from the middle of the 11-car field Manteca’s Josh Cross needed only six laps to overtake Stockton’s Jordan Devore for the lead. He would spend the final 10 laps of the caution free race fending off Joe Flowers, of Manteca, to earn his sixth victory of the season

“It was fun out there tonight. The car was getting tight near the end and Joe was catching me, but I was able to hold him off. It was a good race right to the finish line,” Cross said.

After blowing up his engine in the previous race, Stockton’s Andrew Rumsey managed to salvage third in a borrowed car to keep his faint hopes alive for the B-4 title. Rumsey trails Flowers by 18 points heading into the final race.

Upper Lake’s Jeremy Doss, a multiple winner in the Spears SRL Southwest Tour Late Models at Stockton over the past couple of seasons, showed his overall racing prowess by outdueling veteran Cody Winchel, of Sebastopol, to capture a career first win in the 35-lap Legend’s Tour feature.

Donnie Darter, of Valley Springs, notched his ninth victory of the year in the 15-lap main for the Bomber division and in doing so put a death grip on the season title. Darter now holds a near insurmountable 56-point edge on Galt’s Nicholas Mello and only needs to take the green flag in the final race to lock up the title.

It was just the beginning of a busy night for Darter. He also finished sixth in the Late Model race and 11th in the Legend main.

The 2022 Stockton 99 Speedway racing season concludes Saturday with a program featuring a 100-lap race for the Stockton Late Models, plus Bombers, B-4s, B-4 Juniors.