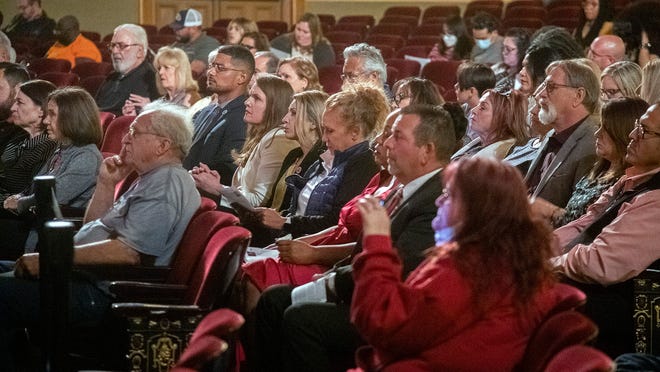 The nearly 30-year law enforcement veteran takes the reins of a lean police department filled with expectations to pick up community trust-building where former Chief Eric Jones left off and opportunity to take the city’s police department to new heights.

“He has a very good style about himself. He’s big on service, he has a great disposition and demeanor, which I believe will bode well for him in terms of the department as well as interactions with the community,” Black said. “He has an inclusive mentality. All those things resonated with me.”

Jones, who had an out-of-the-ordinary 10-year tenure as chief — his predecessors chiefs Mark Herder, Wayne Hose, Tom Morris and Blair Ulring all served less than four years — was lauded for his commitment to developing trust with the community. Chuck Harris, president of the Stockton Police Officer’s Association, said the union hopes McFadden will pick up that mantle.

“I’ve heard nothing but good things about him from his own officers in San Jose,” Harris said. “We want to see him bring some new ideas (and) help us continue our work with the community.”

Jasmine Dellafosse, a community organizer whose mural watches over downtown Stockton, was one of a 12-member community panel who interviewed the four police chief finalists last month.

She said the consensus on the panel was that McFadden was the “shovel-ready” choice, and she was pleasantly surprised that Stockton will have a police chief with the initial approval of both the police union and the community. Dellafosse said the community members she spoke to after the April 20 town hall spoke highly of McFadden.

“I think it’s going to be a good opportunity for everybody … (He needs to) do his due diligence in every neighborhood in the city,” Dellafosse said, “not just taking the word of the department but making sure he’s actually hearing directly from the community about what public safety is and how the community feels about the police department.”

In his role as deputy chief of the San Jose Police Department, McFadden manages the Bureau of Field Operations and overseas units such as SWAT, tactical negotiations and violent crimes. His bureau also most recently created the Mobile Crisis Assessment Team and the Psychiatric Emergency Response Team, reimagining mental health crisis response in law enforcement.

Black said McFadden will have the opportunity to bring 21st century policing — law enforcement practices beyond just use of force and arresting people — to Stockton by creatively and innovatively engaging the public as a full-fledged partner in crime prevention.

“It’s leveraging technology and data in terms of problem solving, and the development of place-based strategies,” Black said. “In the past, law enforcement in general would focus on whole neighborhoods, which we’ve come to realize was not a very smart strategy — the whole neighborhood is not causing crime. Let’s focus on street segments, the place-based strategies, and let’s involve the community in that process.”

McFadden will be stepping into a rattled community healing from a wave of gun violence — Stockton homicides were up over 120% on the year in April — and the tragedy at Stagg High that claimed the life of 15-year-old Alycia Reynaga.

“I think McFadden will have a calming effect on the department as well as the community just based on his leadership style,” Black said.

At 409 sworn officers, staffing is still short of the 485 officers the city promised voters within three years when they passed Measure A. The three-quarter cent transaction and use tax approved in 2013 was intended to help the city build back its services out of bankruptcy. Cincinnati, a similarly-sized city of just over 300,000 where Black was city manager before Stockton, has 1,053 sworn officers. McFadden will be inheriting a staffing battle of attrition on multiple fronts.

“About 30 years ago, Stockton went a massive hiring spree for police officers because the city had not hired any for several years,” Black said. “Most of those officers are coming due to retire.”

The silver tsunami, as Black referred to the impending wave of retirements, is not unique to Stockton, or law enforcement. Black said more than 60% of all public sector employees federal, state and local are eligible to retire today.

Standards to become a police officer have also gotten tighter, as Black said Stockton is lucky to yield 15 officers out of a class of 1,500 recruits. But he said law enforcement has also taken a hit in recruitment in recent years.

“Law enforcement has sort of been under siege over the last several years,” Black said. “That has served as a disincentive for people to want to pursue law enforcement as a career.”

On the union side, Harris said morale is a bit down in the department and he’s seeing officers leave for better pay and safer work.

“Our officers can go 10 minutes down the road in Lathrop and make $30,000 more a year and work less and probably be in a safer environment,” Harris said. “We’re bleeding money on the front end by all this hiring and training … and then we send our qualified officers to other agencies and lose out on all that knowledge and training we paid for.”

McFadden, 50, will be tasked with raising morale both in the community and among the current 409 sworn, 183 professional and 47 part-time staff he will oversee. He will start at a salary of $264,568.90 annually and his CalPERS retirement plan will vest in five years.

Stockton Police Capt. Tony Sajor Jr., a lifelong Stocktonian and finalist to become police chief, will be promoted to deputy chief, opening a line of promotions below him.

Is Paxlovid, the Covid Pill, Reaching Those Who Most Need It? The Government Won’t Say