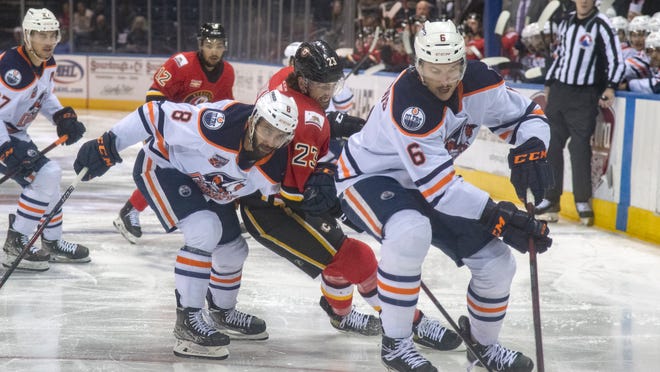 STOCKTON — For the second time in as many nights, the Stockton Heat’s Emilio Pettersen scored the game-winning goal to give his teammates a commanding 2-0 series lead against Bakersfield in the best-of-five Pacific Division semifinals Wednesday at Stockton Arena.

With its 3-2 victory, the Heat can clinch the series with a win either Friday or Sunday in Games 3 or 4 at Bakersfield. If the Condors even the series, the decisive Game 5 would be Tuesday in Stockton.

Pettersen’s 15th goal of the season may have been the biggest of his career, an unassisted shot midway through the third period. When Pettersen initially dumped the puck against the boards near the Condors’ goal, goaltender Stuart Skinner mishandled the puck and Pettersen, already crashing the goal, lifted it into the net.

“The ice was getting a little shaky there at the end and I think he kind of whiffed on it a little bit,” Pettersen described. “I saw it laid there and it was just instincts from there. It was an awesome feeling, obviously, and we’re ready for the next one.

“It’s going to be a challenge (at Bakersfield) because we’ve struggled in that building lately,” he added. “We obviously don’t want to spend more time there than we have to.”

Pettersen was selected by Calgary in the sixth round of the 2018 NHL Draft and led all Heat rookies in the 2020-21 season with six goals.

Teammate Nick DeSimone, who scored in the third period, said Pettersen is becoming a game-changer.

“Emilio has been unbelievable,” DeSimone said. “He’s stepping up to the challenge; It’s the best time of the year and it’s fun to watch.”

The opening period saw the Condors out-shoot the Heat, 8-7, in shots on goal. Both teams’ best opportunity to score occurred, surprisingly, when short-handed during a penalty kill. The Condors’ Luke Esposito failed to convert against Heat netminder Dustin Wolf when he had a one-vs-one attempt after a miscue by the Heat defense.

Wolf, who pocketed his 13th win over the past 14 heat home games, played hero again upon denying the shot. Wolf has now held opponents to two or less goals in each of his last nine games at Stockton Arena. He finished Wednesday with 22 saves on 24 shots.

The Heat’s best attempt occurred when a steal led to a two-vs-one charge toward Skinner, who also took the loss in Game 1. Stockton’s Kevin Gravel attempted a close-range shot which pinged loudly off the left post, leaving the opening period scoreless.

The second period saw a plethora of penalties, three against the Heat and five against the Condors. However, both teams were at full strength — a rarity in the period — when Stockton’s Alex Gallant picked the pocket off a Bakersfield player’s blade, turned around and immediately converted a shot from the red circle an estimated 25 feet away.

Moments earlier, Skinner cleared the puck from behind his own net but suddenly had to rush back into position. It was too late, as Gallant scored his fourth goal of the season over Skinner’s exposed right shoulder.

Bakersfield tied it at 1-1 with 3 minutes, 29 seconds left in the second period on a power play goal by Brad Malone. Stockton’s Walker Duehr had been sent moments earlier to the penalty box for cross checking. In all, approximately 15 of the period’s 20 minutes were played with various players serving time in the box.

The third period saw the Heat take a 2-1 lead just 39 seconds into the action when DeSimone scored off an assist each by Kevin Gravel and Tyrell Goulbourne. However, the celebration in the stands lasted only 30 seconds as Bakersfield’s Devin Brosseau scored an unassisted goal to even it up at 2-2 just 1:09 into the third.

DeSimone said it’ll be a lot easier to cross the Bakersfield city limits with a 2-0 advantage.

“It’s big, but it’s far from over and we know anything can happen,” DeSimone said. “We have to enjoy the day tomorrow, get some rest and come back Friday.”