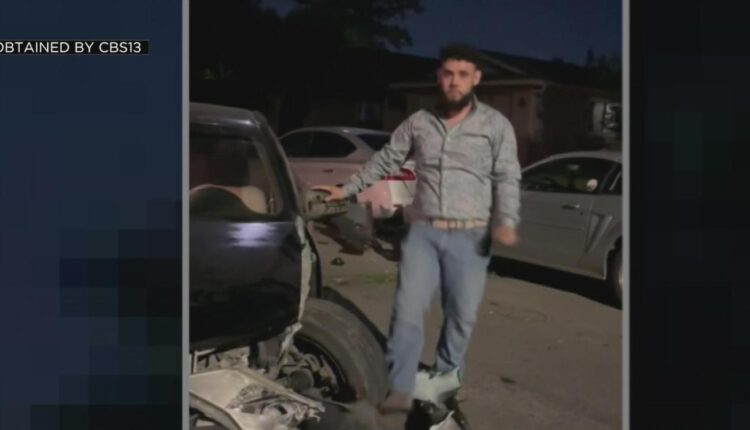 SACRAMENTO (CBS13) — A young Sacramento couple with a baby on the way was left without their car after a person crashed into it before running away from the crime scene.

The Sacramento police are investigating the incident as a hit-and-run.

READ MORE: ‘Have A Plan To Get Out’: New Survey Shows Several Greater Sacramento-Area Cities Have High Fire Risk

Her car was totaled Sunday morning in the crash on Al Court.

“I was able to buy this car with my first job,” she said. “I literally bought it with my hard-earned money.”

Sacramento police are looking into a video taken by Alex’s boyfriend, who wanted to remain unnamed, after he heard the crash outside his window.

“We rushed outside to see what was going on. That’s when we started recording,” he said.

In the video, the suspect, a man, can be seen trying to start his car after the crash before getting out of the vehicle.

“He tries to move this little fender wall so he can move the car but he fails to understand what’s going on because he’s intoxicated,” Orduno’s boyfriend said.

Police were unable to confirm whether the suspect was under the influence because after the crash he walked away from the scene.

“We say ‘Give us ID, we don’t want you to leave,’ and then he takes off running,” Orduno’s boyfriend said.

He followed the suspect, claiming he kept his distance while calling the police immediately to help officers take the driver into custody.

“They were saying ‘You need to come back, you can’t go after this guy, leave him alone.’ We were like ‘OK, this is the street,’ and they were like ‘We don’t care, just come back.’ This fleeing criminal, they just refused to go get him,” he said.

He was frustrated the suspect was still out there and hopes soon he will be held accountable.

CBS13 did reach out to the Sacramento Police Department several times to ask what their protocol is for a situation like this. They didn’t return our phone calls. Though, they did say they’re looking into this crash as a hit-and-run and using the video to investigate.

Diamondbacks come into matchup against the Dodgers on losing streak