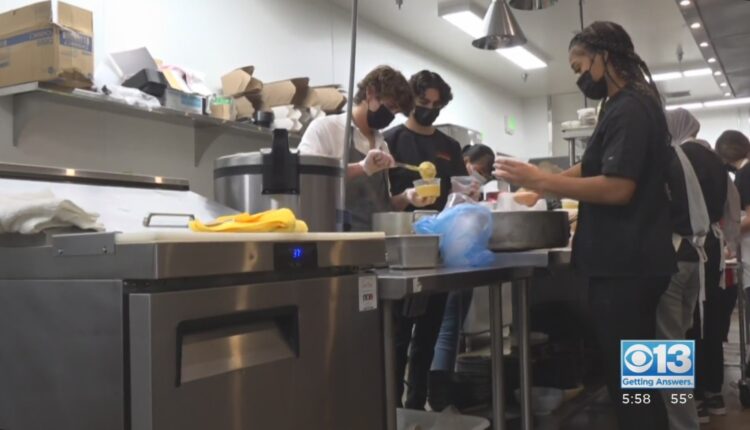 TURLOCK (CBS13) – On a Sunday in November, peek into the First and Main kitchens in Turlock and onions are sweating in a pot; Custard has just come off the stove and is being wrapped; A sous chef is standing in front of the deep fryers and is cooking chicken.

That can of course be seen. In the air is pepper, cardamom, cumin, saffron, and turmeric that mix with the rest of a traditional Afghan meal.

CONTINUE READING: Suspect arrested after alleged raid on his home in Copperopolis

The chefs in the kitchen have never done this kitchen before but they volunteered over a weekend to learn. They are students of Turlock and Pittman High Schools and members of Kitchens For Change.

The club was born as an idea among friends, Elias Rabine and Audrey Smallwood. Both grew up in the restaurant business. When the pandemic broke out, they knew they had the tools and the idea to make a difference.

“The success of this club is due to the partnerships. It’s not just a group of people, it’s students who’ve worked with chefs, with companies, ”said Rabine, co-founder of Kitchens For Change and a senior at Turlock High School.

Rabine’s family owns First and Main in Turlock and he works at the restaurant regularly. At the height of the pandemic, he saw pictures of snakes outside pantries and learned about food insecurities in his own community.

“At first he really didn’t have a specific idea, it was just, ‘How about we do something with the restaurant?'” Said Mohini Singh, Rabine’s mother and advisor to Kitchens For Change.

The idea came up when Rabine found out about Chef José Andrés and World Central Kitchen. Andrés, a Spanish immigrant and American citizen, founded the organization to feed communities in need and also provide training to strengthen communities. The organization also provides food disaster relief following emergencies around the world.

“As high school students, we realized we could help,” Rabine said.

He reached out to Smallwood, whose family owns the La Mo Cafe in Turlock – and Kitchens For Change was born.

“Kitchens For Change are just students dedicated to tackling food insecurity in our community. We’ll do everything in our power to really end the hunger in Turlock, ”said Smallwood.

They called their friends, drew up statutes, put together a team of officers, and set up a booth at Club Rush in September. Singh said nearly 160 students signed up to participate.

Kitchens For Change buys the ingredients for meals through fundraising. Local restaurants open their kitchens on days they are closed to the public for students to cook. You will be led and tutored by professional, volunteer chefs.

On the weekends, students cook voluntarily and meals are given out free of charge.

“These children, who are part of the community to do this work, take care of us, of Turlock, of the welfare of this area. It’s a lot of fun to see, ”said Nestor Jacobo, a volunteer chef.

Jacobo said the teenagers quickly learned the basics of cooking. At their third event, they moved in the kitchen in what he compared to a “dance”. They knew their roles, relied on their strengths, and packaged dozens of meals.

On Sunday, Kitchens For Change focused on feeding Afghan refugees who fled Afghanistan three months ago to escape the Taliban. The refugees who arrived in Turlock with few belongings have not had the opportunity to prepare traditional dishes for weeks.

Zhara Haideri was their guide and guest cook to teach them how to prepare a traditional Afghan meal.

“It encourages me more in the future to help you. These students have inspired me that they are ready to help the refugees, ”said Haideri.

The meal consisted of chicken, rice, a side salad and custard for dessert, all mixed with familiar flavors and spices. Haideri said this was the type of food refugees were given every night at home but had not been able to do so recently.

This meal, she said, would be welcome for many reasons.

This feeling of relief, as Haideri explained, was also experienced by students from Kitchens For Change.

“It’s a good greeting from Turlock. They are welcomed and valued, the food reminds them of home and they know that they are safe here, ”said Soraya Najimi, who came to the US from Afghanistan and is a student at Kitchens for Change.

Najimi said she remembered missing the familiar flavors of Afghan food and when she learned that the club was going to prepare the traditional food, she was excited.

“Hear [my peers] say, ‘Oh, it smells good’ or ‘It tastes good’, Afghan food is not really known, so it’s good to hear that, ”said Najimi.

Others, like Keean Young, said they felt connected to this special meal because of the family.

“That hits a lot of us pretty hard, my mother and mother were refugees from Saudi Arabia. It was something I really felt I had to be involved in, ”said Young.

While they cooked, Haideri, Najimi and Hanifa Karimi, another student who grew up with the well-known Afghan food, shared tips and stories about their preparation. The conversation at the pudding station, where the students were packing individual servings from bright yellow and pink containers, began with a question: “What taste is that?” – it became a lesson on Afghan and Persian traditions.

“IIf this experience teaches them empathy and then they can apply that empathy to their life and their future, then this is a win-win situation for us, ”said Singh.

Kitchens For Change is now looking to the future to raise funds to prepare more meals. Singh said she wanted the club to be formed through partnerships with other restaurants and chefs at other high schools in the area.

Shopping in Stockton for Black Friday and Small Business Saturday