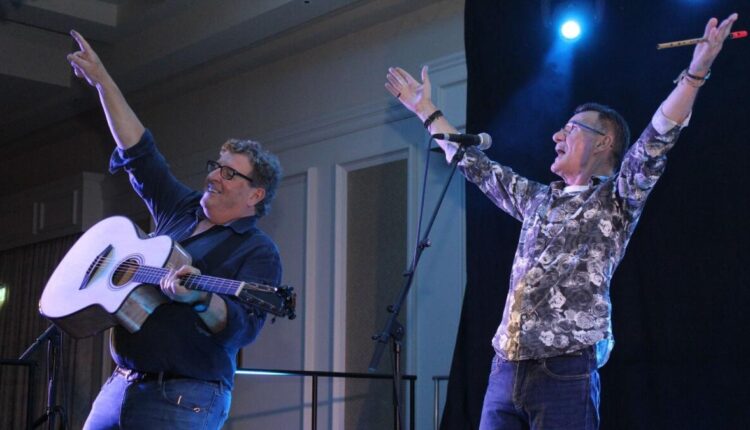 A massive crowd gathered at the Mullingar Park Hotel for the concert, and there was a standing ovation from the delighted audience after the almost two-hour-long show came to an end.

There was a real sense of appreciation throughout – and in what was probably a testament to the maturity – and temperament – of the audience, most watched the performance live, and not secondhand through the screens of their mobile phones.

They were rewarded with a memorable show: Stockton’s Wing at their absolute best, playing classics – The Golden Stud; Jenny’s Chickens; The Drops of Brandy; The Master’s Daughter; Walk Away and of course their signature tune, Beautiful Affair.

The charismatic Hanrahan entertained with yarns and memories, and sought the audience’s opinion on what to name a new hop jig the band played. “Maybe ‘The Mullingar Fleadh?” he suggested to enthusiastic approval.

Around on and off since 1978, the current lineup is founding members singer/guitarist Mike Hanrahan and flautist/tin whistle supremo Pal Roche together with fiddler extraordinaire Tara Breen who first played with the band when she was just 12 years of age; Karol Lynch on banjo and mandolin, guitarist Paul McSherry, and Stephen Byrne on drums.