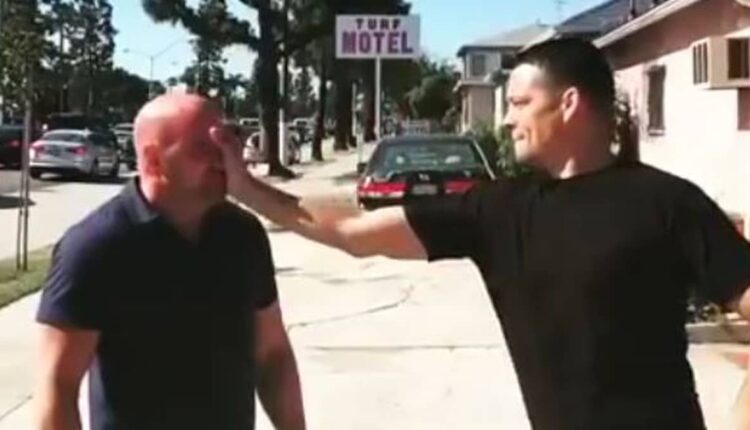 White was on the receiving end of Diaz’s famous strike following the confirmation of the UFC star’s rematch with Conor McGregor back in 2016.

After Diaz vs. McGregor II was made official for UFC 202, the UFC boss ASKED to be slapped by one of the promotion’s biggest names.

And Diaz didn’t disappoint as he delivered a vicious slap flush on White’s face in a moment that will never be forgotten. What a slap.

Why did White ask to be slapped by Diaz? Well, he explained why he wanted to be hit on the UFC Unfiltered Podcast.

“So, what was happening, we had just left and were heading back to the arena and we were on Crenshaw, and there was a place called the Turf Motel,” he said.

“It just came to me, I said pull the truck over, I want Nate to slap me. And Nate looked at me like, what the f**k? You should have seen the look on his face when I said that.

“And then we pulled over and he started slapping away.”

​Asked if he’d let any other fighters on the UFC roster get their hands on him, White laughed: “Trust me, if I opened that one up they’d be lining up for days.”​

​Of course, Diaz went onto lose his rematch with McGregor, suffering a defeat on the judges’ scorecards.

He beat Anthony Pettis before succumbing to Jorge Masvidal and Leon Edwards.

However, Diaz defeated Tony Ferguson at UFC 279 last year before walking away from UFC as a free agent, with the MMA star deciding not to commit to a new deal with White’s promotion.