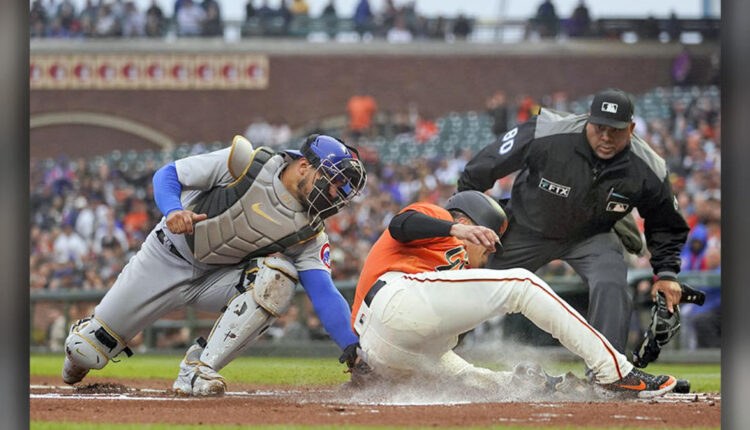 Wisdom connected for the second consecutive day and also doubled in the ninth as the Cubs scored three times to take a 4-0 lead on the way to their seventh victory in eight games.

Wilmer Flores hit a two-run homer off closer David Robertson in the bottom of the ninth before the right-hander struck out Thairo Estrada to end it.

The Cubs struck out 14 times before their offense got going in the ninth with some help from the Giants’ defense.

Christopher Morel then hit a high fly to the right that deflected off Mike Yastrzemski’s glove for an error as pinch-runner Nelson Velázquez scored.

Stroman (3-5) got back into the win column despite a sluggish start and repeatedly having to pitch around traffic.

After getting bailed out by his defense in the first inning, Stroman got Tommy La Stella to strike out swinging with runners on the corners in the second. When the Giants put runners at second and third with one out in the fourth, Stroman induced fly balls from Joey Bart and La Stella.

Stroman allowed eight hits with three strikeouts and one walk.

San Francisco threatened two more times but Yastrzemski grounded out with the bases loaded to end the seventh and pinch-hitter Austin Wynns struck out swinging with the potential tying run on second in the eighth.

A day after hitting his 50th career home run, Wisdom added his 19th of the season on a 3-2 sinker from Alex Cobb (3-5) that was chest high. Wisdom paused at the plate to watch the ball, glanced at Cobb momentarily, and then rounded the bases.

Cobb had a season-high 11 strikeouts and allowed three hits and one run in six innings.

A day after ending Alex Wood’s no-hit bid with a leadoff single in the seventh, Happ broke up Cobb’s try with two outs in the fourth. Happ hit a sharp liner that deflected off the glove of third baseman Jason Vosler and rolled away.

Happ also made the defensive play of the game when he made a one-hop throw to the plate to easily nail Flores trying to score from second on Yastrzemski’s single. It was Happ’s career-best eighth outfield assist this season.

Giants: All-Star outfielder Joc Pederson was placed on the seven-day injured list with a concussion. Vosler, called up from Triple-A Sacramento, started at third base. … Luis González started in right field after missing Thursday’s game with a sore back.

Cubs LHP Drew Smyly (3-5, 3.93 ERA) faces San Francisco for the fourth time in his career Saturday afternoon. Smyly is seeking back-to-back wins for the first time since coming off the injured list.

Giants RHP Jakob Junis (4-2, 2.98) has allowed two earned runs or fewer in seven of his eight starts this season.

Math tutors needed across the Valley