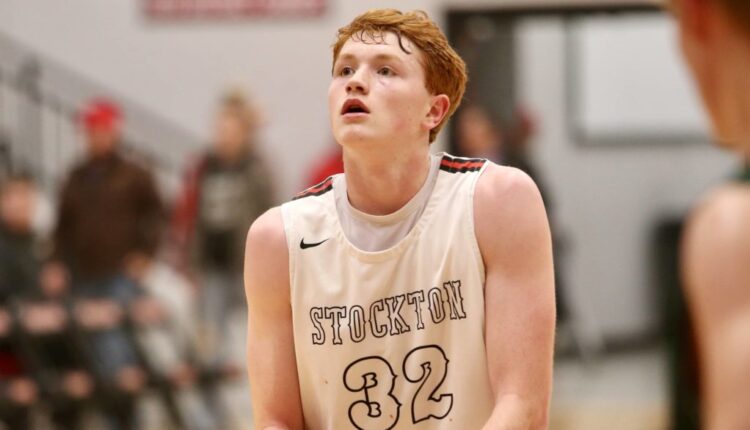 Stockton has a new head coach in Andrew Boone taking over this year. Boone inherits a team that finished 18-9 last year and returns three starters including one of the area’s top players in senior Jay Baxter.

“Jay is an incredible athlete and is the engine that will make our team go,” Boone said. “He was our leading scorer and rebounder last year and will lean heavily on him to be that same state sheet filling guy again for us this season. I look forward to coaching Jay and seeing him grow as a basketball player throughout his senior year.”

Sophomore Preston Rains returns after starting the last half of last season as a freshman. He averaged seven points per game last year.

“Preston came on strong during the second half of the season last year, starting the last 12 games on varsity as a freshman,” Boone said. “He is a great shooter from outside and we will look for him to do just that his sophomore year.”

Branson Sullivan will see his role expand as a senior after seeing time in the starting rotation last year.

“Brandon spent time in the starting rotation the first half of the season last year as a junior,” Boone said. “This season he will be counted on to give us more minutes on varsity. His best contribution to our team this year will be guarding the other team’s best guard and bringing a high level of energy to his team.”

Boone on Hardesty: “Jase spent most of his time at the JV level last season where he was a difference maker every night. I believe last season was Jase’s first year of high school basketball. If he becomes the player I know he’s capable of, Jase is poised to have a break out senior year.”

CLICK HERE FOR LINKS TO ALL OF THE WINTER PREVIEWS

Boone on Brogdon: “Beaux saw a little varsity time last year as a junior, but we will be counting on him this year to be a big part of our rotation. Beaux is extremely coachable, does all the little things right and a fun guy to coach. I’m excited for him to play a much larger role for this team this season.”

Boone on Page: “Lawson as a sophomore spent his time at the JV level. As a defender he is very active and constantly creating chaos for the other team. We will be counting on him to do the same this year at the varsity level.”

Boone on Scott: “AJ spent last year on JV developing as a player. He is a great kid who wants what’s best for the team. He is one of our hardest workers and will be an important rebounder for us this coming season.”

Boone on Colvin: “Layton is another guy who is a great outside shooter. I’m really high on this kid and his potential to help us on varsity as a sophomore. He is a great rebounder as a guard which is a huge plus. Once he truly has confidence in his game, he will be ready to take the next step.”

Boone on Jax Baxter: “From the first shootout we attended this summer, Jax has been in my ear, asking what he needs to do to be varsity ready. He is hungry to prove himself to be a varsity guy and he has the talent to back it up. If he can handle the physicality and the pressure that these 18 year old seniors will give him, there’s no doubt he will be ready.”

Boone on Woods: “Colter is another talented freshman who will have a chance to be a contributor at the varsity level throughout the season. His basketball IQ, passing ability, not to mention his ability to make shots are all reasons he will be looking to get varsity minutes this season.”

Stockton will open the season on Nov. 22 at Butler.

“Even though we return just one full time starter from last year, there are high expectations with this group,” Boone said. “We are going to play a quick but under control style of offense. Defensively, I want to play a fun-aggressive style that will look a lot like hard work. But if these guys are up to the challenge, it will be a whole lot of fun and it will reward them greatly.”