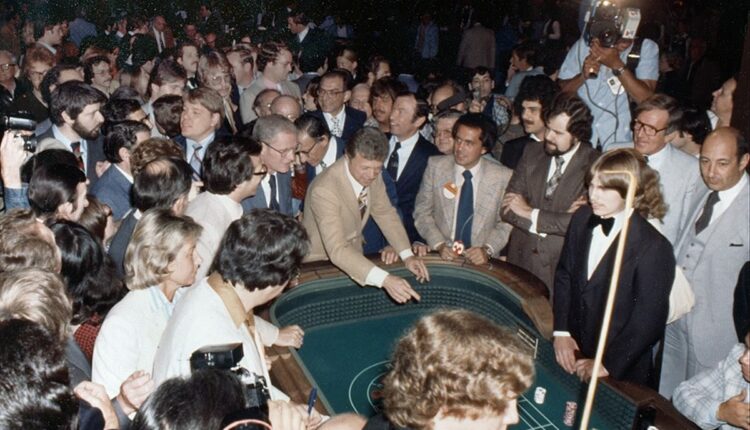 With permission of the photographer, Gregg Kohl, we revealed this photo for the first time in 44 years.

This iconic photo had only been published exactly one time, on May 27, 1978. It had not been seen since, until we printed it.

The photo was taken by Gregg Kohl, who is one of the most respected and talented photographers in Atlantic City history.

The famous actor/singer Lawrence is seen throwing a pair of dice at a craps table, surrounded by then New Jersey Governor Brendan Byrne, New Jersey Senator Steve Perskie, who is the author of The New Jersey Casino Control Act, and many other dignitaries of the day

If you missed it, here’s a link to a great companion piece about how much of a game-changer Resorts Casino Hotel Atlantic City was 44 years ago.

Now that it has been 45 years of casino gaming in Atlantic City, Stockton University is holding an event to shine the light on the industry.

It will take place at “The Lloyd D. Levenson Institute of Gaming, Hospitality and Tourism (LIGHT) at Stockton University will host an in-depth conversation about the process and impact of legalizing casino gaming titled “Celebrating 45 Years: Legalized Casino Gaming in New Jersey” at 2:00 pm on Thursday, December 8, 2022.”

The panel members include:

“LIGHT Faculty Director Jane Bokunewicz will moderate the event, which is being presented in partnership with the New Jersey Casino Control Commission and with the involvement of the New Jersey Division of Gaming Enforcement. Stockton President Harvey Kesselman and James T. Plousis, the chairman of the Casino Control Commission, will also speak before the panel discussion,” according to a release from Stockton University.

The event is free and open to the public. It will take place in the Fannie Lou Hamer Event Room at Stockton Atlantic City Campus at 3711 Atlantic Avenue. It will be a live streamed event on Zoom. A question and answer session will follow.

Stockton University has advised that registration is recommended to attend in-person or online at stockton.edu/light or through Eventbrite.