75% off year of BarkBoard VIP 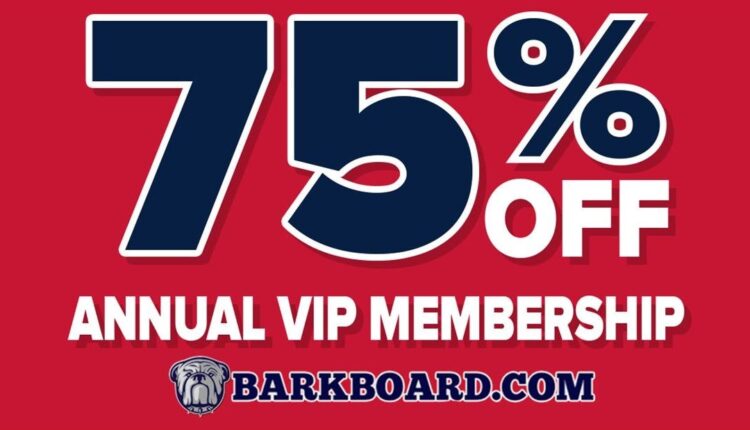 New members can join BarkBoard VIP with an annual membership to BarkBoard.com at 75% off the cost until 9 pm PT on Cyber ​​Monday (Nov. 28)! That’s right, you can get a full year of BarkBoard.com for the small price of just $2.24 per month for a year. That’s not even nine quarters!!

By joining now, you’ll get the scoop on Fresno State football through the upcoming conference championship, basketball season, football recruiting scoop through both National Signing Days and transfer portal recruiting – and you’ll stay covered for nearly all of the 2023 season at our biggest discount!

The first place to look is the BarkBoard Insider Board, where the BarkBoard staff breaks news and insider-only discussion is held. Click here to see the latest: https://247sports.com/college/fresno-state/board/bb-insider-103004/

With a BarkBoard.com VIP subscription, you’ll get unlimited access to:

— Exclusive coverage of Fresno State sports, with the inside scoop on all things Fresno State football, basketball and recruiting.

— Breaking Fresno State news reported only to BarkBoard VIP members before anyone else!

— In-Depth and unique coverage of Fresno State football from practice and on the sidelines at Valley Children’s Stadium.

— The best recruiting coverage in the business, with insider access to where the Bulldogs stand with key prospects.

— Access to BarkBoard.com’s insider-only message board and its outstanding community of Fresno State fans discussing anything and everything related to the Bulldogs. VIP Subscribers get access to read and comment on breaking and exclusive updates.

LIMITED TIME: Join to get 75% OFF your first year! That’s like getting 9 months FREE!

— Listen to or read BarkBoard’s in-depth interviews with each Fresno State commit.

— Get the most extensive coverage of Fresno State’s football season available!

— Get direct access to BarkBoard’s team of insider reporters including publisher Jackson Moore who will keep you covered on Fresno State athletics from all angles. Also get direct access to 247Sports’ team of national and regional recruiting analysts including Brandon Huffman, Greg Biggins, Blair Angulo and many others across the country.

And join the largest community of insider Fresno State fans on the web! So grab this special, and become a member of the BarkBoard family today!!!

Already a member? As a big thank you to all loyal VIP subscribers who are no longer on a promotional subscription price, you can use your BarkBoard VIP account for a complimentary subscription to Paramount+ – a $99 annual value provided to you for FREE. Stream 15,000+ episodes of your favorite shows, watch live TV and watch original series. To activate your Paramount+ account, simply visit https://247sports.com/my/options.

Terms: This deal will end at 11:59pm ET 11/28/2022. This promotion is for new members only. 247Sports.com reserves the right to alter or cancel this promotion at any time. Please write [email protected] with any questions you have. Promotional pricing does not include Paramount+ with your subscription.