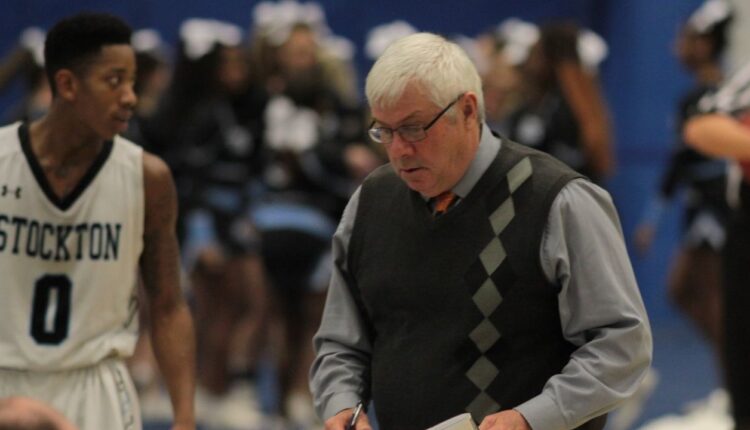 A Millville graduate, Hutchings began his coaching career as an assistant under Mike Krzyzewski at Army in 1975. He enjoyed a career that covered nearly 50 years.

“Hutch” suffered a massive heart attack in November. He recently underwent surgery to have both legs amputated below the knee, according to a GoFindMe page.

“I’ve been thinking a lot about the void Hutch leaves. At various times he was a father figure, brother, friend, mentor and colleague to me,” Stockton head coach Scott Bittner said in a statement. “Hutch was a guy who could always pull a player aside in practice or on the bench and give him a boost or make him feel better.”

Hutchings was in the 17th year of his third stint and 26th season overall at Stockton. He coached under Joe Carideo in 1979 and later served as an assistant coach on Gerry Matthews’ staff for eight of the nine seasons between 1990 and 1999.

A Millville graduate, Bob Hutchings began his coaching career as an assistant under Mike Krzyzewski at Army in 1975.

Hutchings rejoined Matthews on the Stockton bench in 2006 and remained there through the transition to Bittner as head coach in 2016 until his passing. The Ospreys won eight NJAC championships, earned 13 NCAA Tournament berths and reached the 2009 NCAA championship game with Hutchings on the bench.

Hutchings played collegiately at Wheeling Jesuit University in West Virginia, where he was a 1,000-point scorer and later inducted into the school’s athletic hall of fame. Hutchings played professionally in Holland and then enlisted in the Army and worked for its athletic department at West Point.

Hutchings completed his military service after two seasons under Krzyzewski at Army and remained friends with the winningest coach in Division I basketball history for the rest of his life. He worked as a counselor at Krzyzewski’s summer camp at Duke for 40 years starting in 1981 and attended Krzyzewski’s final regular-season game last March.

Hutchings was the head coach at Bridgeton from 1981-87, posting a career record of 91-57 and winning a Cape-Atlantic League championship. He also served as the head coach at Cumberland County College from 1999-2004 before joining the Stockton staff in 2006.

In addition to his scholastic and college roles, Hutchings also coached on the international level. He was an assistant coach for the Saudi Arabian national team after leaving Army and later coached American players in international tournaments for the Student Athlete World Tours organization.

Thank you for relying on us to provide the journalism you can trust. Please consider supporting NJ.com with a subscription.

Kevin Minnick covers South Jersey boys basketball. He can be reached at [email protected] Follow him on Twitter @kminnicksports

Thunderstorms and another week of rain expected