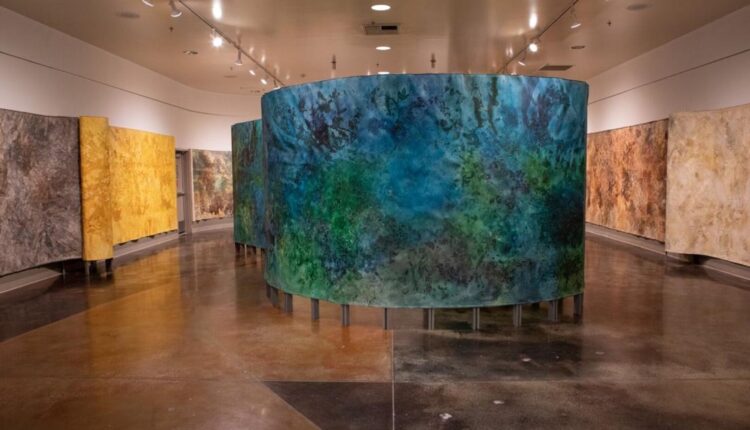 Some might say it takes an artist to find the beauty in a Bakersfield summer, so it’s a good thing the Bakersfield Museum of Art had one with a fantastic idea on how to use nature to transform the gallery space.

“Vista” by Rotem Reshef is not the first time the museum has gone big and bold but it is rare occurrence, according to BMoA curatorial assistant Victor Gonzales, who cited Natalie Arnoldi’s “Gigi,” a life-sized painting of a great white shark , “which immediately made any onlooker feel like they had stepped into an aquarium,” and Gustavo Godoy’s fiery, ominous and jagged sculpture “Prototype,” both displayed in 2019, as examples.

Working with large-scale scrolls and stretched canvases, which contain imprints of native flowers, trees and shrubs, Reshef placed them throughout the space to create an immersive experience for the viewer.

“She has now brought the outside inside and now allows the viewer to look at the nature from Bakersfield through her eyes,” Gonzales wrote in an email. “Even though I have seen the entire process of its creation, installation, and now the finished result, I am in complete awe of the presence of the work.”

He said she managed to tap into the beauty and healing qualities that nature provides and that exists within our local economy that also thrives in an oil industry.

“In a world where the two groups are often pitted against each other, Rotem seeks to show how they both complement each other and that is where I hope audiences will be able to make that connection and receive from this beautiful work.”

And how did Reshef, who split much of her time between Tel Aviv and New York City, find herself in Bakersfield? It was art critic Peter Frank, who had written about “On the Edge,” the groundbreaking exhibition of work from the private collection of Joan and Jack Quinn shown at BMoA, who made the introduction.

“What I do in my art is reflect on different ecological and social things,” the artist said. “And I work with nature for large-scale painting installations. … (We discussed) it could be a very unique art opportunity to bring to the museum.”

Scouting a number of locations, Reshef was taken with the Panorama Vista Preserve, viewing it from Panorama Park.

“I was struck by the view. There was something about walking in the promenade. It’s preserved nature. The greens and blues of the river and the gray, all the colors were really beautiful. The hills coming down from the valley, the browns and gray and sand colors.”

That view of nature served as contrast with the nearby Kern River Oil Field, full of pump jacks, a device Reshef had never seen before.

“In my art, usually I deal with these aspects of global warming, what’s happening in the world. The harmony of nature and oil in a serene scene — this is what I wanted to bring into the museum.”

With the permission of the Kern River Parkway Foundation, Reshef and Katherine Winters, of White Wolf Wellness Foundation and Kern River Parkway Nature Center, gathered plants that would be covered in paint then removed from the scrolls and canvases, leaving only their impression behind.

Reshef considered the painting process, which she accomplished over visits this summer using a temporary studio in town as a form of storytelling.

“It’s like chapters. I paint as much as I can, then (after it dries) I roll it and paint the next section.”

Working on the floor while painting, Resehf said she could only focus on the task at hand at that time.

“When I paint, I don’t have the perspective. I am on it. … I cannot see the whole thing.”

The installation, which took place last month, is when everything came fully together.

“The viewer is literally walking into the artwork instead of being a third-party viewer,” Gonzales wrote. “Rotem was very meticulous about the planning of how each scroll would snake around the gallery space so when she came in, she already had an overall idea of ​​the layout.”

He said the challenge they faced was making sure each scroll unrolled to the exact, predetermined measurements so that the wall behind it could not been seen and to ensure each scroll “perfectly flowed from one another to continue this visual story of the natural landscape of the San Joaquin Valley.”

The finished exhibition is a sight to behold, said Amy Smith, the museum’s executive director.

“This exhibit in particular is truly a unique offering. She transformed this gallery space with these scrolls. To include native plants and flowers, that is extremely creative.

“It does envelop you as you walk through it. You can picture yourself walking the hills and valleys.”

Reshef, who as a visitor to the area was taken with the landscape, hopes that residents can find something special in the work.

“I would like to invite the people of Bakersfield and Kern County to look at their familiar surroundings through my artistic lens and perhaps gain a new perspective or add a layer of magic to their relationship and/or connection with the natural vista.”

Along with “Vista,” this week’s opening features two new shows — “Color and Abstraction: Select Works From BMoA’s Permanent Collection” and “Dynamic, Surreal, Vibrant: Marion Osborn Cunningham” — along with “Of Rope and Chain Her Bones Are Made ,” an ongoing exhibition featuring the work of nine Los Angeles-based female artists.

Gonzales, who curated these new exhibitions, said he was inspired while cataloging the permanent collection over the summer.

“I came across several pieces I had not seen before and some of those were so vibrant with color. Two in particular were David Koeth’s ‘Hidden Agendas’ and Alberto Herrera’s ‘Indian Boy.’ These works really stuck with me and I knew I had to incorporate them into an exhibit somehow.”

“Color and Abstraction” features more than two dozen works from the permanent collection that shows how artists individually use color in their abstracted work to “create a visual narrative and invoke an emotional response.”

Gonzales wrote, “Color is very important in art because it often is used as a signifier of visual language, for example, the grass commonly being depicted in a green color or the sky as a light blue. When artists use color in an abstract work of art, they are now relying on that color to reach out to the viewers and build that bridge about what they want to communicate because when in abstract work most if not all recognizable characteristics have been removed.”

As stewards of Cunningham’s work, museum staff are always looking for new and exciting ways to interweave her work into programming, Gonzales said. This show highlights her art career and history with the museum as well as her use of vibrant and saturated colors in her art. The exhibition even features one piece, “Loose Poppies,” that has never been seen by the public.

Supporters of female artists have a lot to explore for this opening, Gonzales said, noting with pride the creators of “Of Rope and Chain Her Bones Are Made,” Reshef’s and Cunningham’s shows and female artists included in “Color + Abstraction” such as Tina Dille, Linda Christensen, Stephanie Stockton, Alix Dumka, and Karen Carson.